Puerto Vallarta has been a blast. I've been hanging out with a great group mostly comprised of Baja Ha Ha crew from other boats some local Americans working in Mexico and the staff of sailing instructors from J-World sailing school. A Thanksgiving dinner party was hosted by a now retired Yahoo Dot comer whom renter a really nice Condo on the Malacan (water front strip in the old part of PV). The food was great as was the company. In preparation for Thanksgiving the hostess asked Casey and I to find some Camarones (shrimp), sugar and coffee so we got on a bus and when it took an unfamiliar turn we decided to stay on the bus to see where it went. It turned out to be an all day adventure as the bus passed through several towns and then climbed into the mountains. Finally we were the only passengers left on the bus and the driver asked where we were going and we said to where ever the bus was going and then back. We bumped and crawled over roads that I was repeatedly amazed the bus could negotiate. Communication with the driver was a bit tough but we had plenty of time to talk as we were now in the middle of nowhere. We learned that he has two daughters 13 and 15 going to school in Minnesota so driving the bus must not be too bad of a job. Finally, we saw several other buses parked next to a shack and our bus parked as well and shut off the engine. We joined the bus driver for some refreshing mango lemonade and chatted with the other bus drivers telling them of our adventure of getting on the wrong bus. We figured that it was now approaching siesta hour and we would be stuck taking a nap with the bus drivers. However, one driver seeming took pity on our situation and guided us to his bus for the ride back to the city. On the way down we got off the bus at one of the intermediary cities when we say a market with camarones and quickly competed our shopping and then jumped a bus back to the condo to drop off the camarones for the hostess. The bus adventure was a great opportunity to see the "real" mexican county side and made for a memorable Thanksgiving day.

Casey and I decided we were ready to head out and do some exploring having seen the sights of the city. We headed out of Marina Vallarata and put up the sails for a cruise down the resort beach before tacking north to the anchorage of La Cruz de Haunacaxte pronounced "wan-nah-KAHSH-lay" which is the cruiser anchorage for those not wanting to stay in the expensive marinas of PV. The next morning we headed north sailing all day until we were at a point where we weren't going to make our next anchorage before dark so we motored sailed and still approached Jaltemba a little late. The charts as previously noted on the blog are not useful for making landfalls so we made a pure radar approach navigating around a point and then between a 30' tall rock and a small island and a few anchored shrimp boats before taking anchorage behind the island in complete darkness. We were happy to be safely anchored and enjoyed a fairly calm anchorage and slept well. I upgraded my anchor gear in San Diego and it is masivley oversized for my boat so I always sleep well with no concerns with dragging anchor in the night.
The next morning we continued north in light winds to San Blas and anchored in Matanchen Bay with three other cruising boats. Before long everyone had joined us aboard La Vie to share local knowledge of the area as well as much story telling of our adventures thus far. One of the boats "Kamakazi" from Bellingham later in the evening invited us over as we had met previously met in San Diego and as it turned out the crew was mutinying and looking for a new boat. This made for some drama and we steered clear of there problems by excusing ourselves and dingying back to La Vie.. The crew was seen being taken to the beach the beach the next morning and we heard they ended up hitching a ride with some trucker to the next port to try to find a new boat. There was no way these two were getting a ride on my boat!

The city of San Blas was founded in 1535 by the Spanish with an amazing fort "Iglesia de Nuestra Senora del Rosario" with its bell tower immortalized by Henry Wadsworth Longfellow's final poem "The bells of San Blas" in 1882. It was here in San Blas that the Spaniards built vessels used for the exploration of the western coast of North America (including Puget sound??). The infamous pirate Cliperton was captured and hanged at Matanchen Bay adding to the mystique. The San Blas harbor is a river estuary and features 7 miles of Jungle river navigable by dingy. The Jungle dingy ride was undertaken with expediency and proved to be a great adventure however, we were disappointed to not have seen some of the more elusive creatures such as the Black Panther, wild boars or crocodiles. We did however see an amazing number of birds and made two stops on shore to see what else lurked in the jungle. Getting on to shore required wading in some amazingly deep and slimy mud followed by careful navigation of all sorts of fauna many of which were thorny resulting in numerous scratches and many interesting insect bites including several ticks that were immediately extracted upon getting back in the dingy. Casey also climbed a palm tree to retrieve a fresh coconut. After the dingy tour we enjoyed a fabulous dinner of Camarones ala mexicana.

Today we are heading back to PV to provision and then head south of PV. Heading further north from San Blas this time of year usually requires strong headwinds and much cooler waters so I probably won't be north of PV again until early March when the weather warms up again. 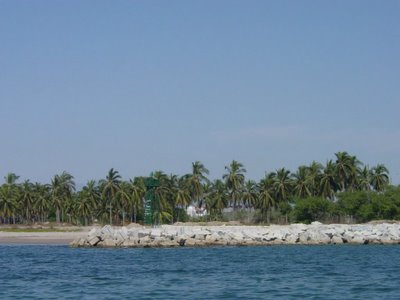