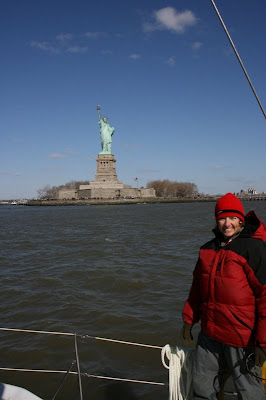 Kathy braves the cold 38 temps with wind chill in the 20's for a picture with miss Liberty. 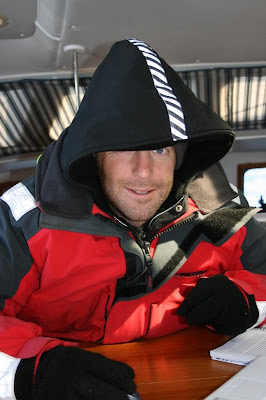 Dave Bundled up and feeling like the marshmellow man with soo many layers. 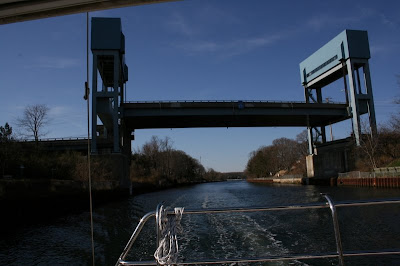 After a nice offshore sail from New York Harbor we tucked into the NJICW to find a place to anchor for the night we were waiting for our first lift bridge to open, dodged a power boat and accidentally ran aground. Oops! Kathy called the bridge tender and canceled the requested opening The boat was stuck and the tide falling so I though we might have eliminated the need for an anchor for the next twelve hours. Powering ahead or astern yeilded no results. We dropped the dingy in the the water and used it as a tug to push the boat out of the mud. YES! We were free and called the bridge to ask it to open again. The bridge tender gave us kudos for recovering from a embarrassing situation. The NJICW is shallow with the main channel less than five feet in many places. Stray from the channel and you are instantly aground.

Our biggest observations about our new boat is that it's really easy to sail. It is also very kindly to be aboard as you don't have to hold on or worry about falling over like a mono-hull. Even offshore nothing in the cabin was disturbed during our forty nautical miles offshore. The best part is that we sailed fast without even trying. Boat speeds were seven to eleven knots most of the day as we reached at 120-150 apparent wind (true wind 10-20 knots).

After lunch I had a little nap and it was really nice to have the boat be so comfortable, flat and quiet while sailing.

Our loose plan is to head south to find warmer weather.
Posted by David Kane at 3:20 PM