We have about thirty nautical miles to go to San Andres and plan to stop for a few days. Weather forecast still calls for more squalls to forty knots so it will be good to hide out to wait for better weather. . As I look out the window I see major clouds up ahead. 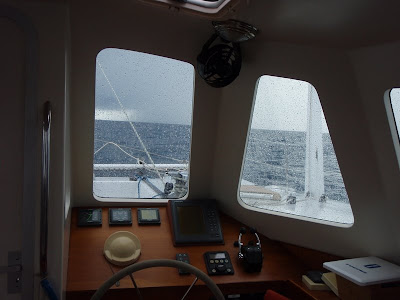 Squalls: At night it can be difficult to identify a squall until the wind starts to pick up. Just before a squall hits the air temperature will drop noticeably then you know strong winds and rain are imminent. We use the radar just like the weather channel to identify the squalls while they are still many miles away. But, unlike the weather channel our radar only has a range of twenty four miles. The heavy rain associated with a squall will show up on our radar screen at about twelve miles out giving us advance notice that something is brewing. This particular radar is pretty old and doesn't work so hot, it's mono chrome screen is worn out and it's user interface is what you'd expect from 1997. Just like using a super old computer. At night you might also a large could depending on the moon and starts and also see massive amounts of lightning from one area that indicate squall activity. 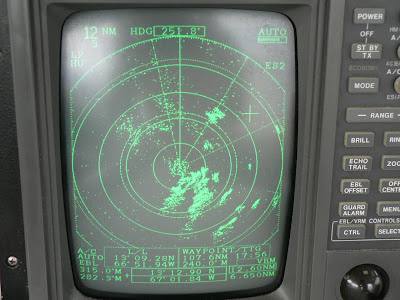 During the day it's much easier to spot potential squalls simply by looking at the cloud formations. 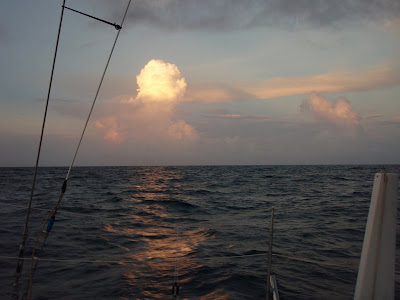 We would want to avoid building thunderheads like this. 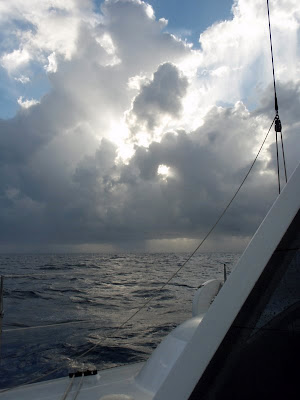 But, mostly you don't have much of a choice. 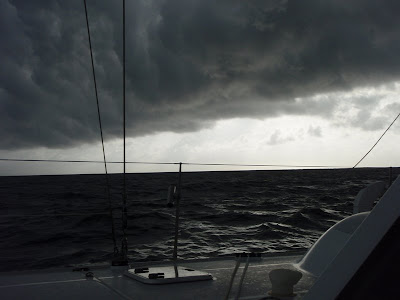 A ugly boiling mass of black clouds like this usually packs some extra wind as well.

Evading the squalls is more luck than anything and is only possible with the smaller cells. Last night I did manage to steer between two ugly lightning riddled storms and raced the boat through going at a speed just shy of ten knots. Again, this is mostly luck, but a fast boat gives you more options.

Most of the night we ran just the jib and a double reefed main and then took the main down and rolled in some jib if sever squalls threatened. A very conservative approach that cost of lots of distance over night, but necessary until we really understand our new boat. A third reef is available, but not rigged and I plan to get this set up before our next voyage as a third reef would have suited the conditions much better and resulted in higher boat speeds and less sail handling.

This morning the seas are double the size of yesterday at maybe two meters plus and the winds about five knots stronger. Still excellent sailing conditions and while I eat my breakfast we are sailing in the mid-eight knot range on just the jib. After breakfast the double reefed main goes up and we should be running high nines. Even at these speeds and sea state I still don't have to worry about my coffee spilling. Very cool.