Motoring down Lisianski Strait from Pelican in rain and fog we caught a glimpse of a small pod of Orca whales heading the other way. Surprisingly, this pod is one of only a few encounters we've had with Orca whales in the last months. In comparison Humpback whales are so prolific it much more likely to see ten Humpbacks than one sailboat. The coastline of Yakobi Island and Chichagof Islands are inhabited with a vast number of sea otters. The otters go about their business unperturbed until the boat is within as little as thirty feet. Hearing the boat then they move from a floating on their back position to a heads out of the water to look around position. At this point we are very close together and the curious otter looks us over closely and seems to give us a 'what the heck are you doing here look' before diving briefly beneath the murky waters.

Upon reaching the 'full on' waters of the Gulf of Alaska, ocean swells and rain filled gusts of wind swept our decks. The large number of off lying small islets and rocks afford some relief from the crashing undulating seas for those brave or foolish enough to weave a course between them and the rugged windswept surf pounded rocky shore. A few of these 'inside' or more aptly named 'suicide' routes are listed in our cruising guide so we very judiciously tried out a few on our way to Mirror Harbor.

Arriving at the entrance to Mirror Harbor I looked at the entrance with a large degree of skepticism as the running swell swept 'Fairway Rock' with foamy crashing vigor. Having already triple checked the chart, guidebook and sketch, I checked them a few more times before proceeding into what appeared to be a kelp and weed chocked dead end.

Rounding Fairway rock and keeping close to Point Schultz we quickly found our path blocked by thick bull kelp in quantity enough to quickly ensnare the propellers, keels and rudders with their slippery slimy tentacle like arms. Stopping and backing up, I again considered the sanity of our position so close to the boiling churning seas as they rumbled and crashed against the jagged basalt shoreline. Appraising the flowing, ever moving mass of kelp I spotted an opening closer to the opposite shore and backing up and spinning the boat we aimed for the modest path that ebbed and flowed in sinister swirls. Once deep into the kelp choked path the swells began to abate as did the anxiety of being in such close proximity of rocks that would render our boat into a floating pile of kindling and flotsam in short order. 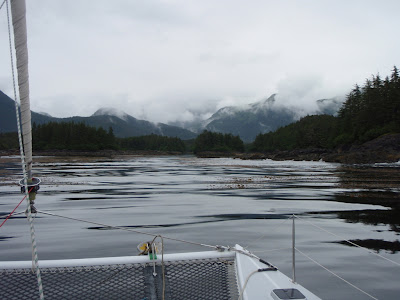 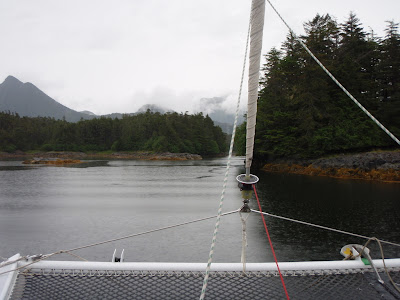 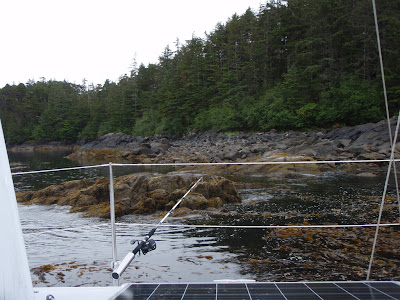 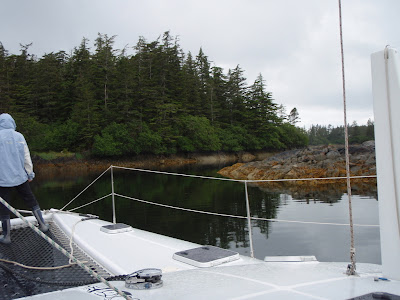 Ahead lay a labyrinth of closely spaced rocks with notes in our cruising guide that suggested the channel to be 30' wide ahead. Recall our boat is over 23' wide so with a margin of a little of two feet to spare on each side we slithered ohh so carefully amongst the rocks making a dogleg turn here and there, then nearly running aground as Kathy yelled from the bow that the bottom was far to close. I had turned a little too sharp around one of the many rocks along the serpentine path to the anchorage and nearly scraped the hull. Arriving unscathed we were surprised to see another boat anchored in the choice center position. Relegated to the margins of the anchorage we dropped the hook with six feet of water under the boat with the prospect of the tide dropping five feet overnight. Given the rocky bottom this was a bit too close for comfort that would made for a fitful nights sleep. 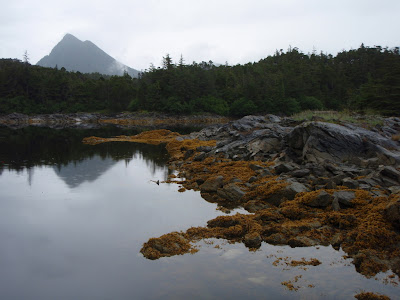 Launching the dinghy we headed for the trail head for our next major challenge of trying to avoid being eaten by a Grizzly bear as we walked the mile plus to the White Sulfur Hot Springs. The trail was a dilapidated single track boardwalk or better described as a mile long wet and slippery log walk. And yes, it was still foggy and raining with vigor. We set out with a bit of trepidation and began to sing a few rounds of 'Jingle bells' as we slipped and slid along the wet boggy and loggy trail. Why Jingle bells? I have no idea, but for whatever reason it seems to be the only song remaining in ones bear fear induced brain when faced with the likely prospect of running in to a Grizzly in the wilds of outer island Alaska. 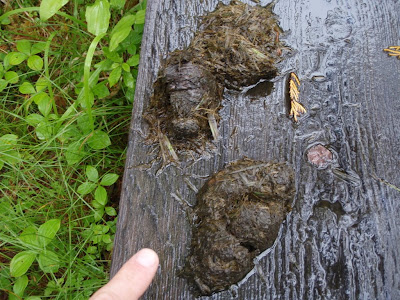 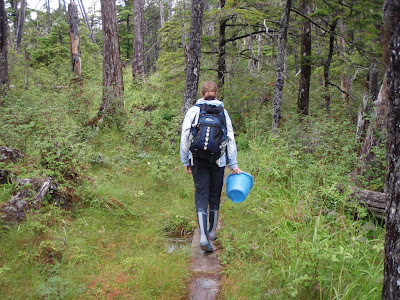 On more than one occasion very real crashing of bushes was heard and on another several grunts were heard from far too close by. Arriving at the hot springs we were all too ready to relax and really enjoy a good mind numbing hot soak in the pools. Two other sailors were their enjoying the outdoor pool and they shared a story of meeting a Grizzly on the trail on their way up to the pools. Better them than us! After a good soak and soap we made our way back to the boat and kept the bears appraised of our position with a few rounds of a new song Kathy made up. It goes something like "Were going on a fishing trip and here's what were gonna catch" You then proceed to name types of fish in alphabetical order repeating the choices each time a new fish is added. Albacore, Barracuda, Coho, Dog Fish, Eel, Flounder, Grouper, Halibut, Inky Squid, Jack Trevalli, Krill, Ling cod, Mackerel, Nudibranch, Octopus, Parrot Fish, Quahog, Red Snapper, Salmon, Tuna, Urchin, Voluptuous Fish, Wahoo, X-Ray, Yellow Tail, Zooplankton. Safely back in the dinghy we explored the connecting bay before heading to the boat and off to bed early, being exhausted from the hot springs. 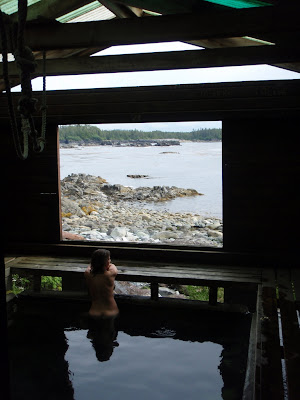 Kathy enjoying the view from the indoor pool at White Sulphur Hot Springs.