April 24, 2012
2PM boat time
Position at 0000 April 25, 2012 UTC: 10°12'S 138°46'W
Day 21: Mexico to Marquesas Islands... Arrived Marquesas
Early this morning on our final approach to Fata Hiva I started the port engine around 5:45AM to charge batteries, so I could make water with Spectra Catalina 300 13 gal/hr reverse osmosis desalinator.
Because of the time change it was more like 3:15AM local and the stars were still shining brightly as I struggled to stay alert after lots of sleep deprivation over the last 20 some days.
The engine woke Kathy who got up to go to the bathroom and also woke our cat Shell who was apparently scared shitless by the engine and dropped a few huge turds on our bed while Kathy was in the bathroom. What a nice surprise that was! Cat shit in the bed at O'dark thirty. Kathy, mostly asleep, changed the sheets and zonked back out. Lucky me my shift had just ended at 6AM, but I felt bad about Kathy having to remake the bed after the cat shit incident. Eventually, I got some bunk time in nice cozy clean new sheets and when I woke up at 9AM we where about an hour out of Fata Hiva. It was super cool to finally see land appear out of cloud and sea haze. Lush green jungle clad craggy slopes jutting out of the sea and spectacular rock spires were quite the sight.

After a bit of a struggle trying to find a spot to anchor due to one boat hogging the anchorage with 300' of chain out we finally got set. We were still super low on fresh water, so I fired up our Honda generator to run the water maker some more and charge the batteries. Everyone was exhausted, but resolved to go for a hike to the 200' waterfall, a 2 hour round trip. Andrew launched the dinghy and jumping aboard stepped on a squishy rotten flying fish which had landed in the dinghy probably over a week ago and it was pretty gross. So, Andrew scrubbed out the dinghy while Kathy packed snacks and Kelsey worked on getting things sorted out around the boat as I fussed with the water maker.
All good, except that we were not technically allowed to stop at Fata Hiva, although many boats do this every year there is a small risk that you might get caught and fined and who knows what by Customs. Most years this never happens and we were sharing the anchorage with five other boats of which we know for sure that four were not checked in and had been at Fata Hiva for days goofing off.
So, we had the anchor down maybe 2 hours when the French Polynesian Customs boat pulls into the anchorage. Talk about lousy luck. Only 2 hours and we were busted. This seemed an exceptionally good time for us to move along, so as Customs dropped anchor we raised anchor and started to sail out of the bay. In short order the Customs boat launched their high speed skiff and intercepted us asking that we return to the anchorage to be boarded, inspected and whatnot. Within minutes of dropping the hook for the second time we had maybe 8 guys aboard inspecting and checking everything. As it turned out we drew a 'Pass Go, without going to jail' card. The Officers were professional and courteous and the inspection convenient as we are all clear with customs until Tahiti. Just need to check in with immigration at Hiva Oa. I'm pretty sure that my log book saved our bacon as it showed that we just arrived and we pleaded a bit that we were out of drinking water and had to stop to make more...and then we planned to leave immediately for Hiva Oa.
So, we are now underway for Hiva Oa and hope to get there before dark to sort out the crowded anchorage. We are all super exhausted and were hoping to be napping now as we pound our way North. The wind which is usually SE is blowing a little out of the ENE today, so on the nose.
Lots of bites today with a triple hook up and lots of other nibbles, but we can't seem to land a fish.
Happy to be here in the Marquesas and looking forward to getting the hook down for a solid nights sleep.
That's it for today. 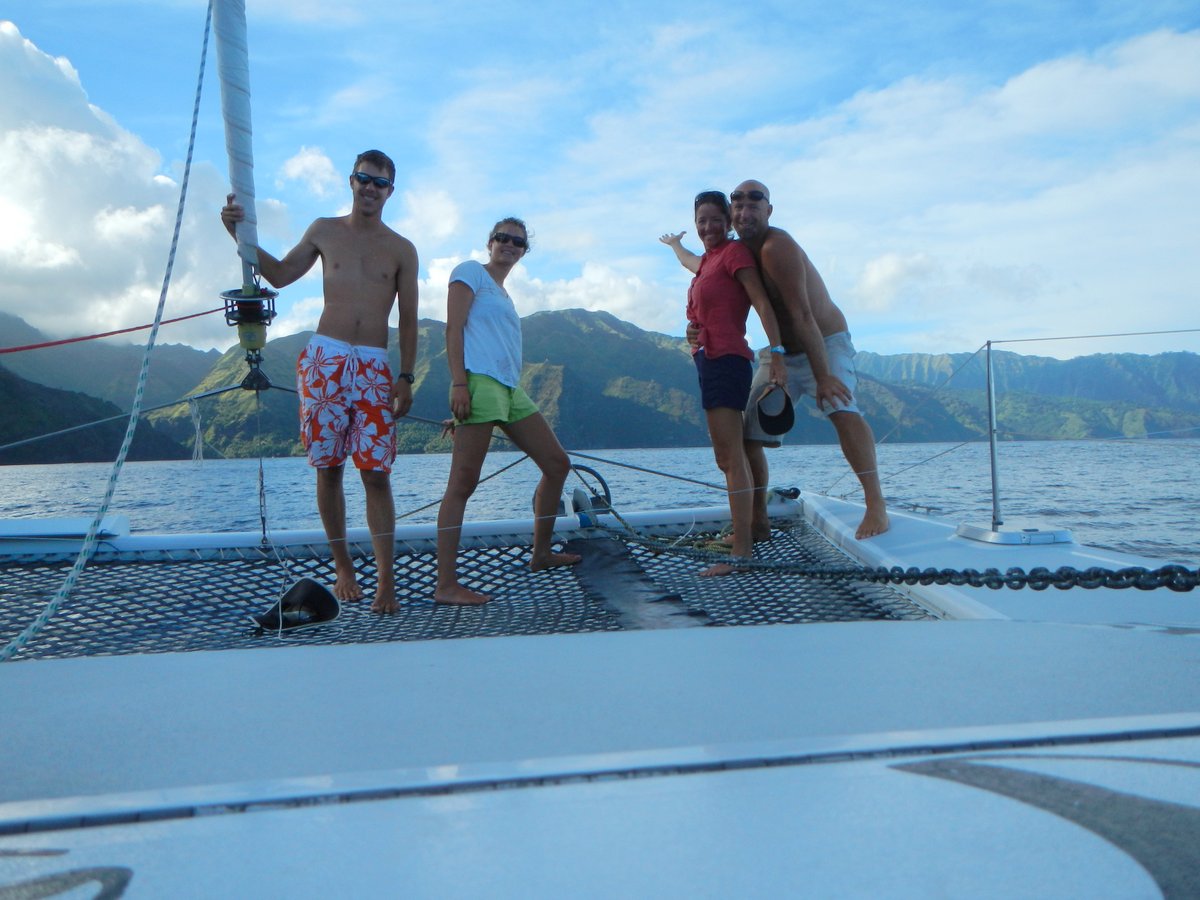 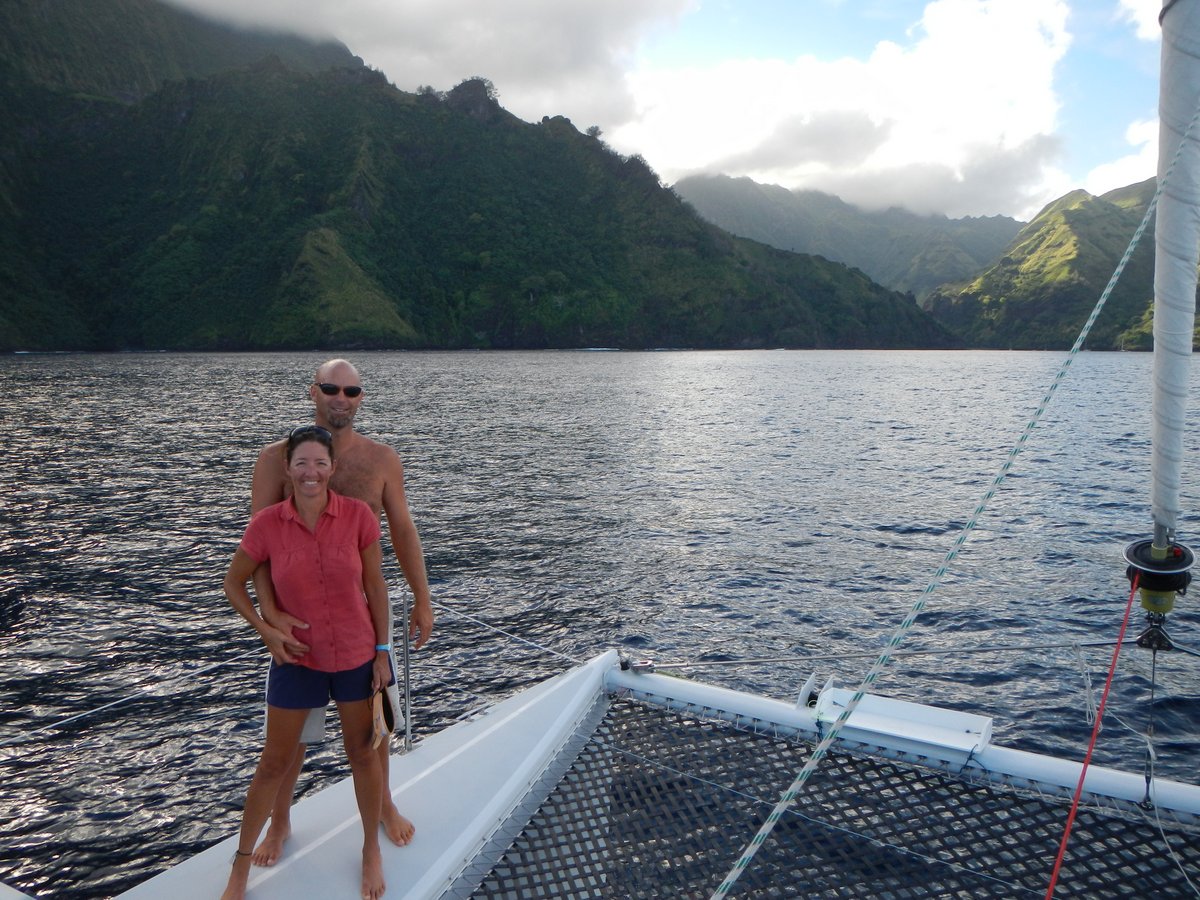 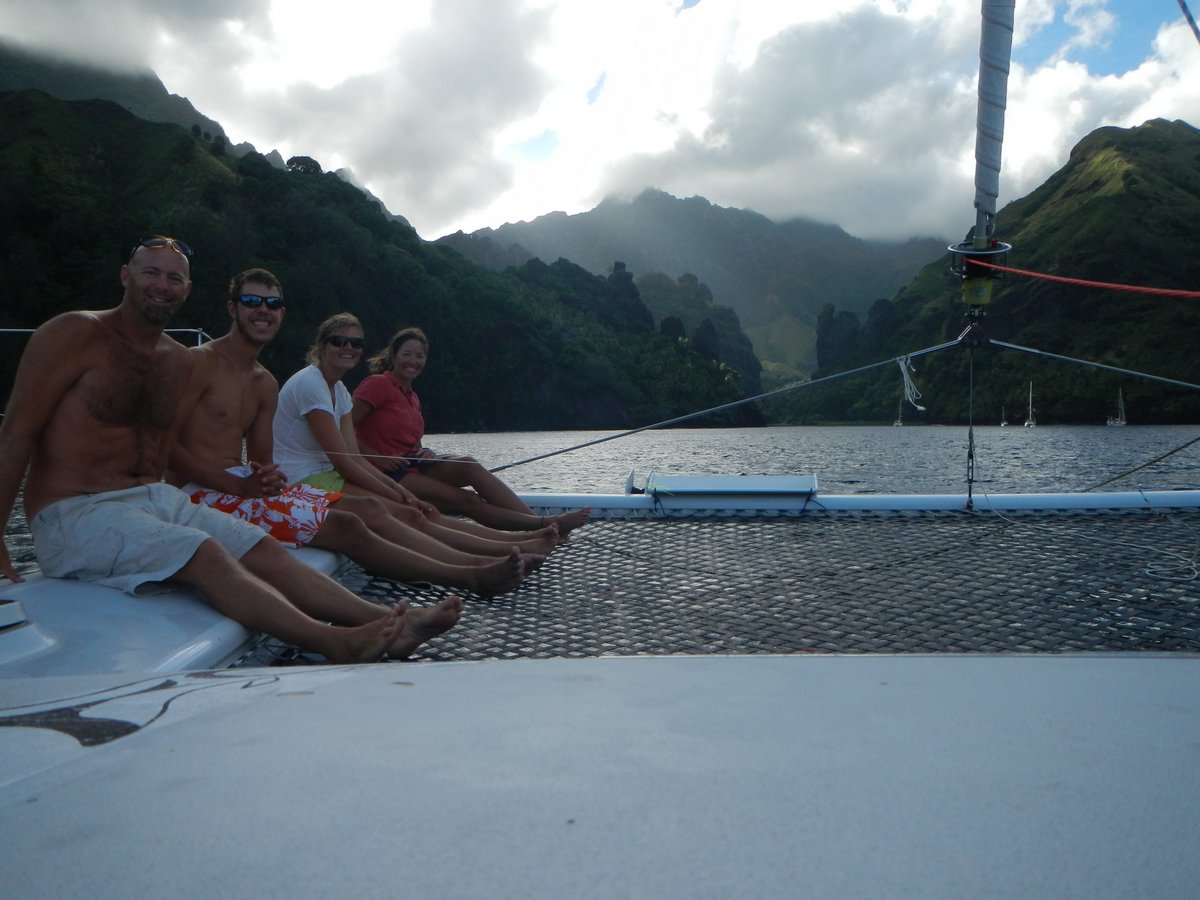