No-See-Um bites and a broken windlass 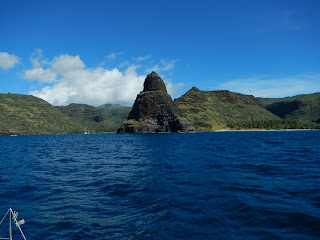 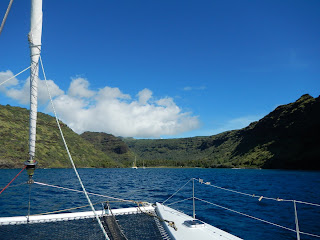 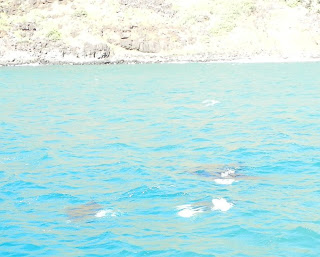 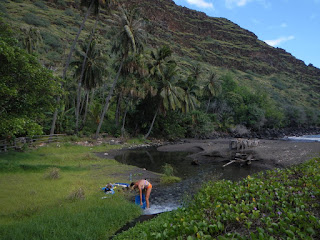 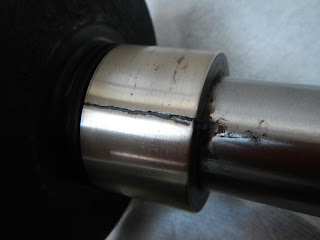 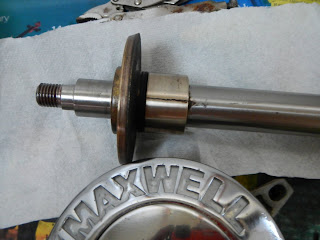 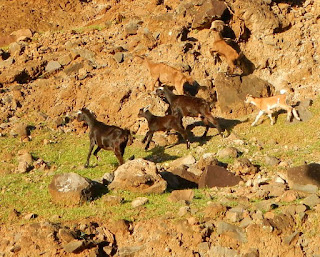 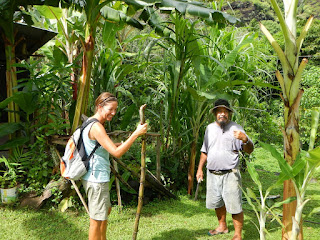 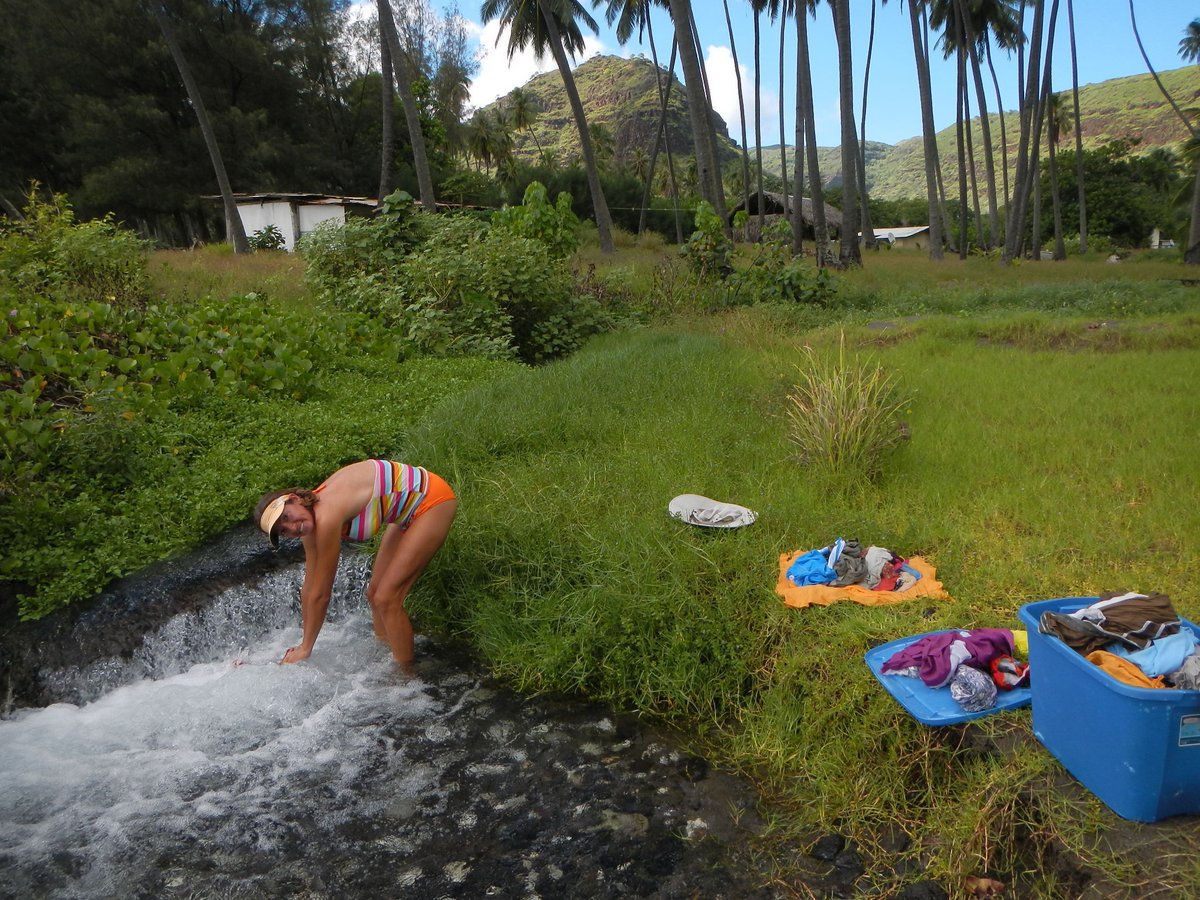 
Anchored the last two nights at Baie Hanamenu, our anchorage position was 09°45.8223'S 139°08.4129'W in about 12 meters with good holding in mud. Baie Hanamenu is home to a half dozen Marquesan vacation homes which were all eerily vacant. Fruit trees abound in the many neatly tended yards. The cruising guides all say that Hanamenu is an abandoned village, but the homes are in good repair and likely just used for holiday outings. The star attraction in the bay is a cascading fresh water spring that fills a waist deep rock lined pool with refreshingly cool water. Cool anything in the Marquesas is a rare treat and a dip in this pool is highly recommended for a midday respite from the heat.

The beach at Baie Hanamenu consisted of dark volcanic sand and pounding surf churns the water into a murky muddy mess. Near the anchored boats the water is still murky and as we entered the bay we spotted six manta rays where the blue ocean water was mixing with the muddy murk. We swung the boat closer to the mantas and I counted 13 sharks in close proximity and a school of what I think were three foot Yellow tail. We spun around the Mantas again, this time with a fishing lure in tow and made several laps. We shouted out to another boat in the anchorage to have a look at the rays and the dozen or so four to five foot sharks and before long the brave (or foolish) sailors were swimming into the mix. We hauled in our fishing line and dropped our anchor as we hoped the swimmers would not become part of the feeding frenzy.

Later we headed for shore to check out the spring and have a swim and spotted a five foot shark cruising the surfline in the murky waters with his fins well out of the water. The water was so murky you couldn't see the remainder of the shark and we were not so keen to wade into the water to launch the dinghy. I definitely would NOT swim at Baie Hanamenu, it seems it would only invite a bite.

The next day we headed to shore to do some laundry at the spring where we unknowingly received several hundred no-see-um bites. Later in the evening and the next day the full fledged itching began and so we continue to suffer with well bitten legs, arms and backs. On the back of my legs I have over 190 bites alone!

The wind had a Northerly component and the anchorage at Baie Hanamenu became quite a ride. We pulled anchor to move to another bay and found the conditions outside the bay bad enough that we were willing to drop the anchor again and tough out the rough conditions. Dropping the anchor our two year old Maxwell RC8 windlass made strange and very bad sounds. Great, a super rough anchorage, blazing hot sun and now I get to disassemble and trouble shoot the windlass. Removing the motor was easy, but the gearbox was firmly seized to the gypsy shaft. I tapped hopefully with a hammer, but nothing moved. I pulled out a gear puller that was too small for the job, but managed to cobble the parts from a second gear puller to extend the first. A very makeshift arrangement that managed to move the awkwardly shaped gear box about 1/4" before a flange on the gear box snapped. At this point I was several sweaty hours into the job and after lunch decided to take a nap to see if I could dream up a new approach. The nap was fitful in the 90F+ cabin heat and rocking and rolling of the blown out anchorage. Back at the project I employed the use of a massive hose clamp to help secure the gear puller and then tediously would turn the bolt 1/4" turn, tap on the gear box with a hammer and by this slow and tedious method I made some progress. Several hours later still crammed inside the anchor locker with my legs loosing circulation I finally won the battle and just in time for dinner. With all the parts of the windlass now on my work bench I could began the trouble shooting process. It seems an O-ring failed allowing water into the shaft bearing that caused corrosion between the stainless shaft and bronze bearing which cracked the bronze shaft bearing causing lots of extra friction. I polished everything with 1000 grit sand paper, greased things up and reinstalled all the parts, so now we can limp along for a bit while we figure out how to source a shaft and bearing.

Bright and early, we tested the windlass and successfully hauled the anchor to head for Baie Hanaiapa. The no-see-um bites seem to itch more and more and we are in a bit of agony. Anchor down in Baie Nanaiapa, Shane on s/v Clover pulled into the bay. Shane joined us for a trip ashore to explore the lush fertile valley with heavily ladden fruit trees at every turn. Mango, papaya, pampelmouse, limes, oranges, bananas and coconuts everywhere. We met William and plan to return to visit him tomorrow to sign the yacht log book he's been maintaining for many many years.