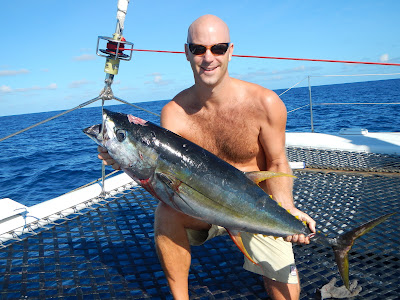 We had some great stars last night and very calm sea conditions. Once the moon set, the horizon was indistinguishable as the stars reflected off the glassy calm sea. I buffed up on my southern celestial bodies with the aid of Google Sky Maps, an App on Kathys' old Droid X smart phone. Kathy cooked a great fish dinner and hit the sack early. I was feeling pretty fresh so I stayed on watch until 4AM. It seemed like a good idea at the time, but when I woke up at 8AM I was not feeling so rested. Before I even had a sip of coffee to clear the cobwebs, we had a fish on the line. Kathy had waited until I woke up to deploy the fishing line and she hadn't even got half the normal line out when a big fish hit the lure. I jumped to action to slow the boat and get us 'hove to' (drifting slowly with the boat oriented perpendicular to the wind). Then the fight began with what we were thinking was a big shark based on the huge run of line that ripped off the reel. Sometimes sharks follow the boat, so it seemed likely. About a half hour later, dripping with sweat and with both arms burning from the battle, we spotted a silver blue flash of the fish below the boat. At this point we were pretty sure we had a Yellow fin Tuna and wrestling the fish closer to the boat, sure enough a big delicious Yellow fin emerged. We had a brief discussion about the size of the fish and whether we could fit it in the fridge. It was decided we'd try to land the Tuna and my first several attempts to sink the gaff were futile as the fish would revive a bit, dive deep and rip line off the reel. Eventually, I sunk the gaff, squirted some cheap Mexican Tequila down the gills and stuffed a rope through the gills and mouth and secured the fish to the boat. After the requisite steps to properly dispatch the fish as prescribed for high quality Sushi we took the fish forward to the trampoline for weighing, photos and filleting. The fish weighed in at 36lbs, making it one of the biggest Yellow fin we've landed. At this point our cat 'Shell' pretty much was out of her mind with the smell of fresh fish and was making quite a racket tearing around the boat emitting all sorts of excited happy sounds. She even climbed out back on top of the surfboards, where she is not allowed to go. Bad Kitty! Then strangely when offered some fresh fish to snack on she loses interest. I'm not sure what's in the kitty chow we feed her, but it's hard to imagine it could be better than fresh fish.

Kathy, true to form, cleaned the fish au'natural to avoid getting blood and guts on her clothes and I took the fillets down to the galley, sliced out the bloodline and packaged the tuna in meal size portions. We have our system worked out well and processed the fish quickly and were back underway and ready for showers in short order.

The wind is still super light and we're hoping for some wind or this 500+ nm passage is going to take a long while. We've made only 135nm in the first 24 hours.