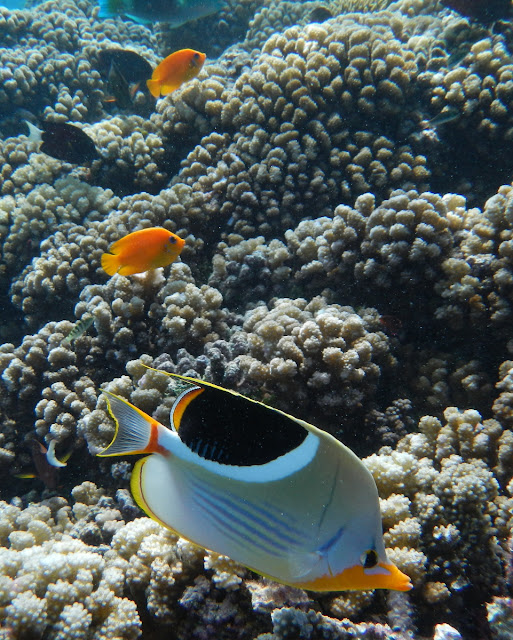 A few underwater pics from our Nikon Coopix AW100 point and shoot camera that's also waterproof to 10meters or 33 feet.  We love this new camera as it easily fit in a pocket, has a built in GPS is shock proof and takes good pictures and HD video.  The perfect camera for our lifestyle. 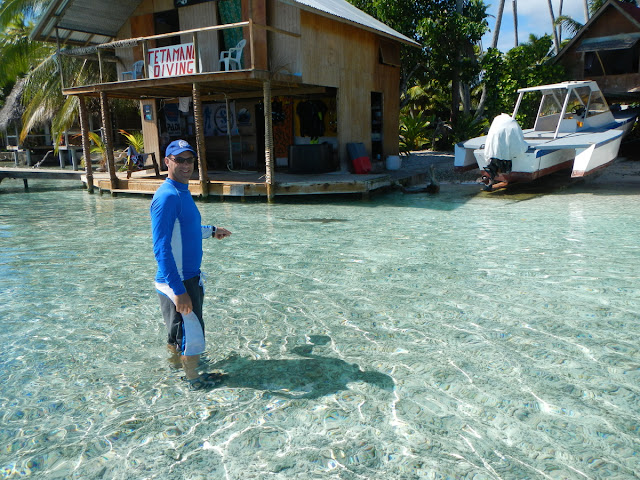 Dave at the dive shop at the South pass at Fakarava atoll, South Pacific.  Near where Dave is pointing you can see a small black tip shark swimming by the dock.  Walking to shore here from our dinghy we saw at least 30 sharks. 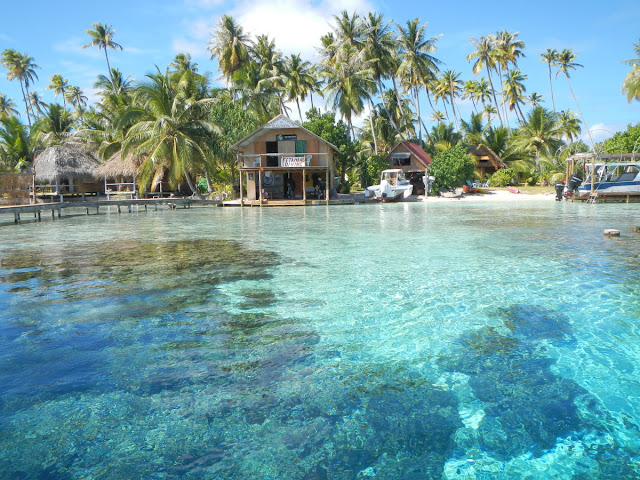 Crystal clear waters show off the coral below. 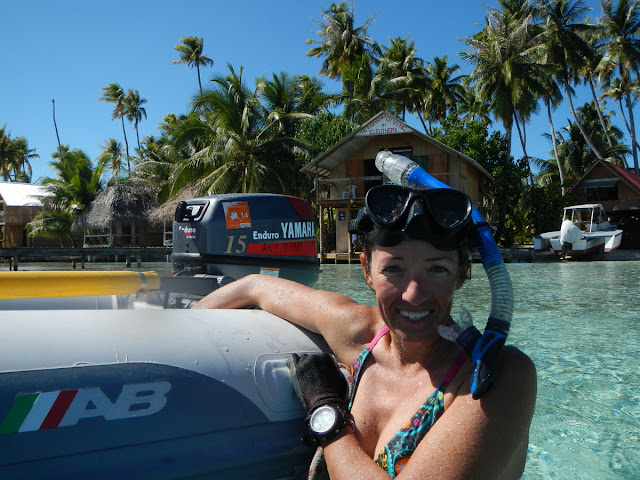 Kathy all smiles after some spectacular snorkeling in Fakarava South pass.  Kathy  hit fifty one feet (51') on a single breath hold free dive in the pass while going head first into hundreds of sharks.  Superb diving Kathy!   We got some good GoPro underwater videos that will be posted on YouTube at some point. 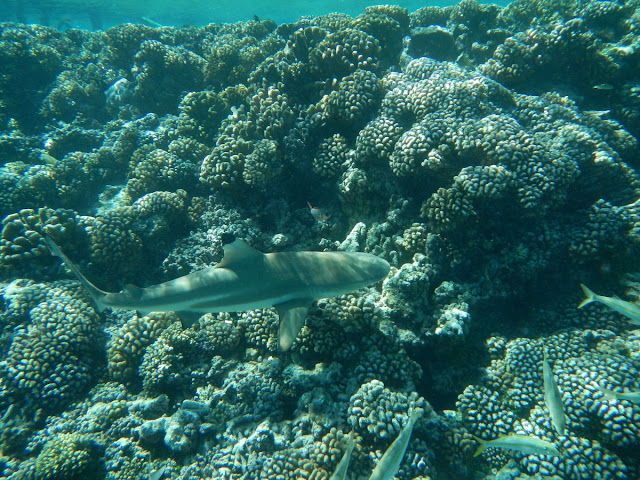 Black tip on the reef. 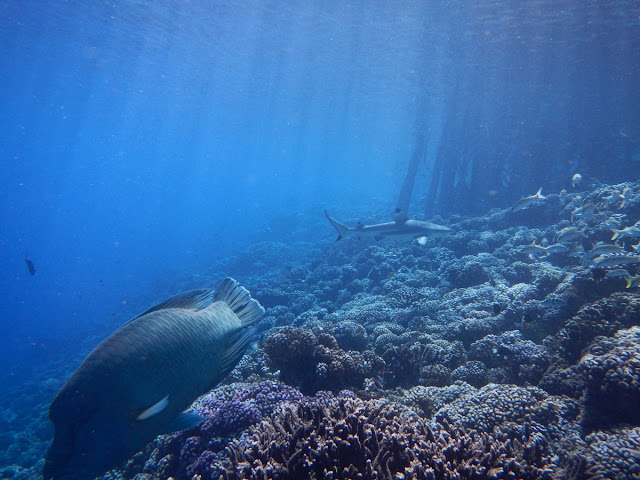 Wrase on the right and Black tip shark on the left. 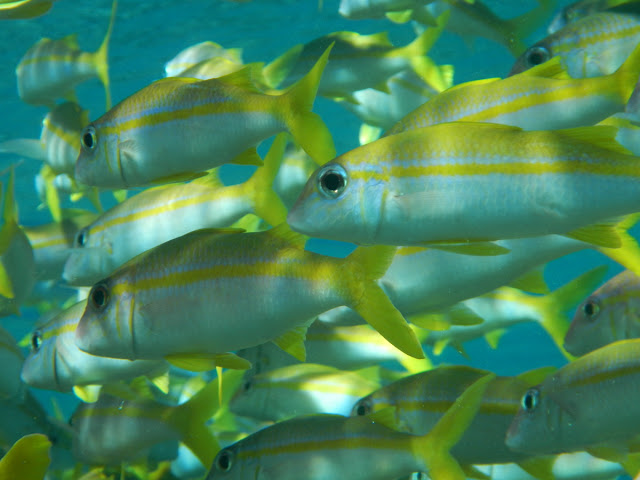 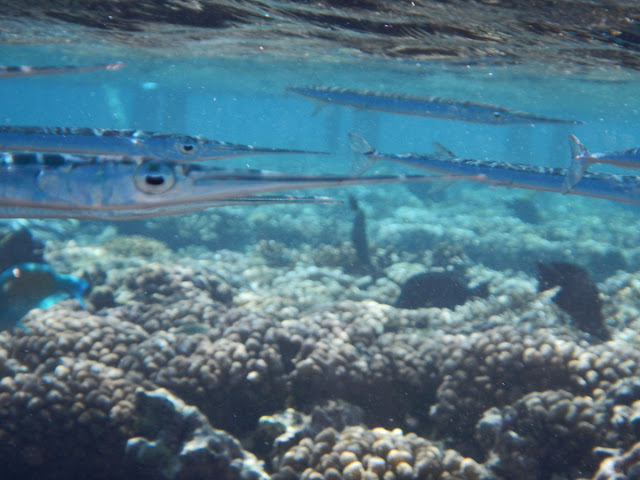 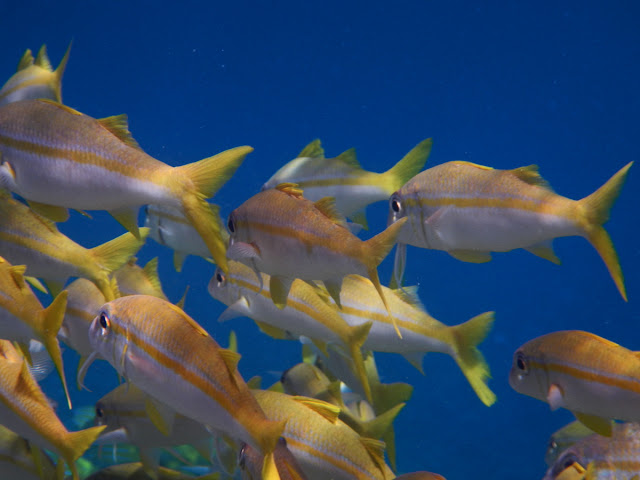 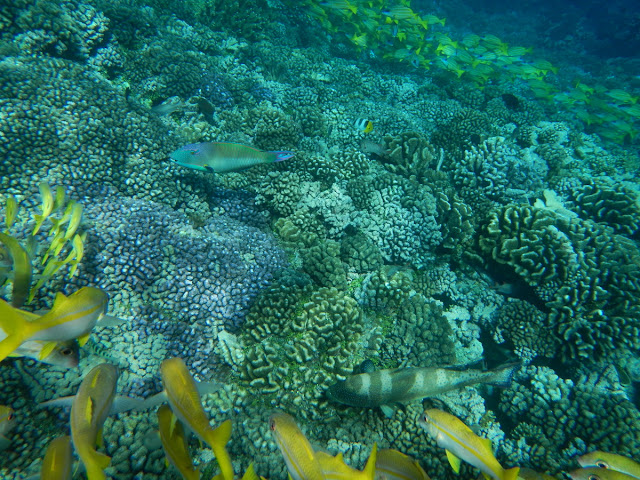 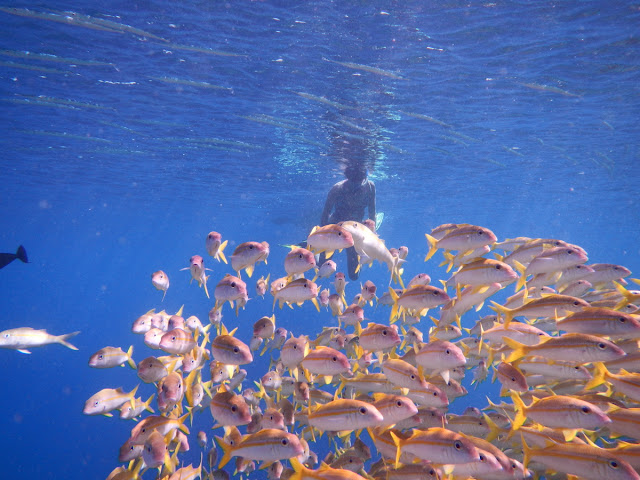 Kathy swims toward a school. 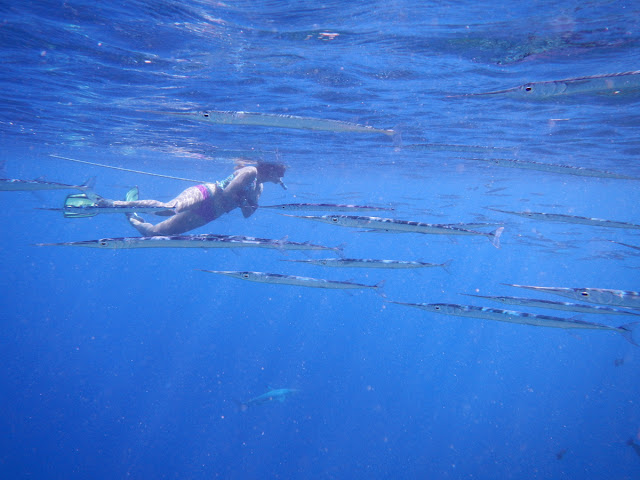 Fakarava is Fantastic! The last 48 hours have been spectacular! After the amazing sail from Tahanea and dropping the anchor at Fakarava South pass yesterday afternoon we wasted no time getting the dinghy launched and the adventures rolling. To get things started we did a quick meet and greet by swinging by the other two boats in the anchorage. Then we headed toward the motus for some beach combing, shelling and to gather a few coconuts. s/v Local Talent hosted for sun downers which ran until nearly cruiser midnight. Back on the boat we had a break from fish with an excellent dinner of bratwurst, sour kraut and potatoes.

This morning we headed over to the pass to catch a few drift dives on the flood current. As expected the snorkeling was fantastically fabulous. SHARKS, SHARKS and ohh so many SHARKS. Hundreds each drift! Someone said there might be a thousand in the pass, it sure seems possible. The coral was nice and there were zillions of fish of all descriptions, but this one is all about the sharks. After three drifts we went in close to the pier by the dive shop to check out the Wrasse and innumerable fish in large schools and yes, there were sharks here as well.

Sitting in our dinghy 20 feet from shore in two feet of water we'd watch groups of sharks parade by the dinghy and after about 30 had passed we timed our shore landing to avoid the bigger groups cruising the shallows with fins out of the water. A quick walk around 'town' which is just an old cool church, a little dive shop, and a few bungalows for rent, then we headed back to the boat. We needed to mail some stuff for our French Polynesian visas so we planned to sail up to the North end of Fakarava. A few other boats had left maybe 30 minutes to an hour earlier and with the mast still visible up the lagoon we had a nice visual to measure our progress. It's about 29 nautical miles from South anchorage to North anchorage and we got underway at 1PM and dropped anchor at 4:25PM for an average speed of 8.3+ knots. We caught up with a fifty foot plus aluminum sloop and sailed neck and neck with them all the way into the anchorage. A real blast to trim and tweak for several hours with idyllic conditions of flat water and solid breeze. At times we had 11 knots of boat speed with only 21 knots apparent.

We made a quick trip to shore to buy a baguette and some beer and have a look around. It seems the town has grown up a bit since my last visit six years ago.