Moved up to Passe Tapuhiria on the Northwest side of Makemo atoll. Google Earth imagery showed a nice looking anchorage off the seasonal village of D'Ohava. D'Ohava is just a few ramshackle huts and a copra shed and no one was around when we anchored in 9 meters sand and huge coral heads. The heads almost guarantee to foul the anchor so we're running just a 2:1 scope to minimize the tangle and despite the short scope it seems it would be impossible to drag anchor very far. Anchorage position is as above 16°27.11'S 143°58.07' W and would seem to afford good wave protection from all quadrants due to shallow reefs. During our visit the wind has been very light.

We took a walk around the island and found a large cistern at the copra shed which was full of many hundreds of gallons of water.... maybe a good spot to do some laundry? We also took a peek into most of the buildings and found empty barrels, empty tins of corned beef and butter and a few old copra bags. One shed had an ancient looking generator, but it was infested with hornets so we gave it just a quick glance. Near the pass was a newer shack with nice window screens which would be a good defense against the flies, hornets and mosquitoes that plagued us on our walk.

Walking the edge of the pass was spectacular. In certain places you could walk out on a shelf where the water dropped off into the deep cut of the pass. With a vantage point looking down into the clear waters we could watch schools of Trevaly, bright blue green Parrot fish, black and blue spotted Grouper, yellow Angel fish and several nice sized sharks while only standing in shin deep water. Walking the shallows we spotted crabs, giant clams, three types of Parrot fish, Black tip reef sharks, Octopus in two different locations!, bright pink, white, green, and yellow corals and too many small fish to count. This wading and reef walking adventure was super cool and with so many diverse fish and in such quantities it definitely ranks as the best yet. We were super excited to drift the pass, but with the flood tide coming later by nearly an hour each day, it wasn't until 4PM that the flood began. Four o'clock is nearly shark thirty and we did see plenty of sharks, Grey, Black tip and White tip during our swim. The shear number of fish and the tameness was remarkable. You could swim right up to almost any fish and the fish would check you out just as much as you checked him out. There must be very little spear fishing as these fish had no fear of man. Fish almost seemed to come and check us out, especially the Trevaly who always seemed to school under the dinghy.

Kathy baked another loaf of bread in the pressure cooker. This time Rye bread and it turned out great and seems to save quite a bit of fuel as the cooking time is greatly reduced. The loaf size is also really nice for sandwiches.

Tomorrow we plan to sail for Tahanea about 50 nautical miles distant. 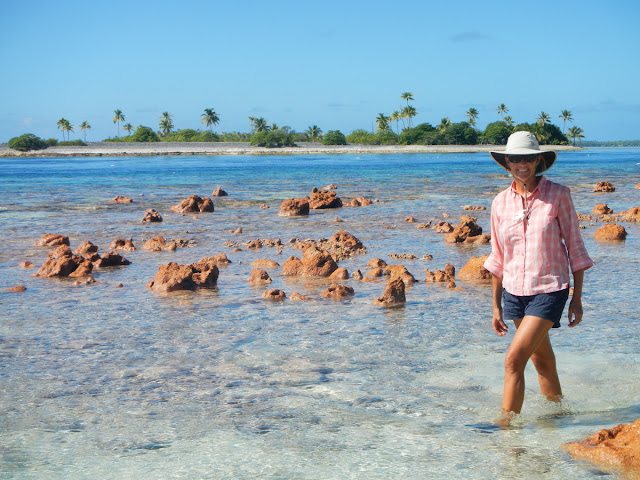 Wading along Passe Tapuhiria on the Northwest side of Makemo 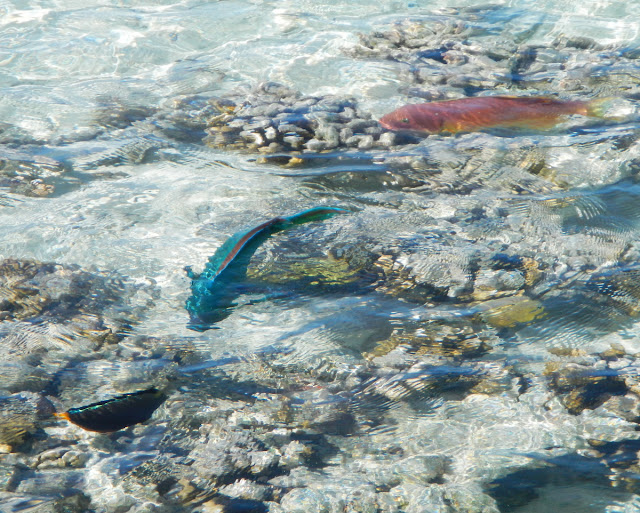 Parrot fish in the shallows 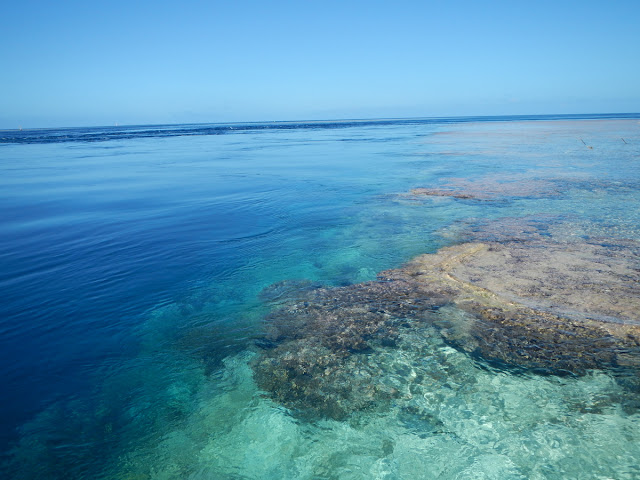 Edge of Passe Tapuhiria looking into the deep clear waters we could see many fish and even sharks swim past. 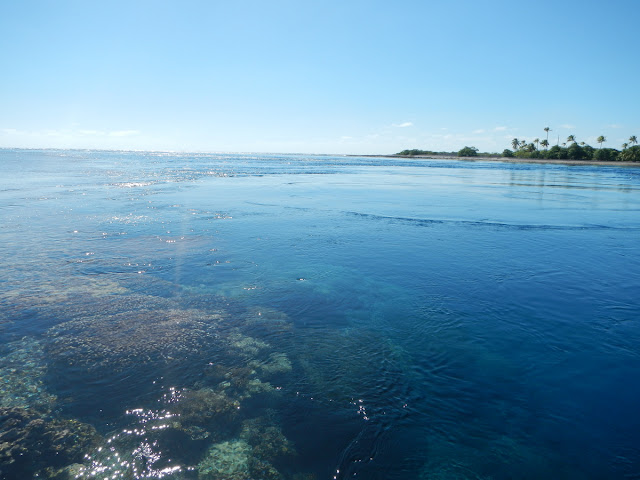 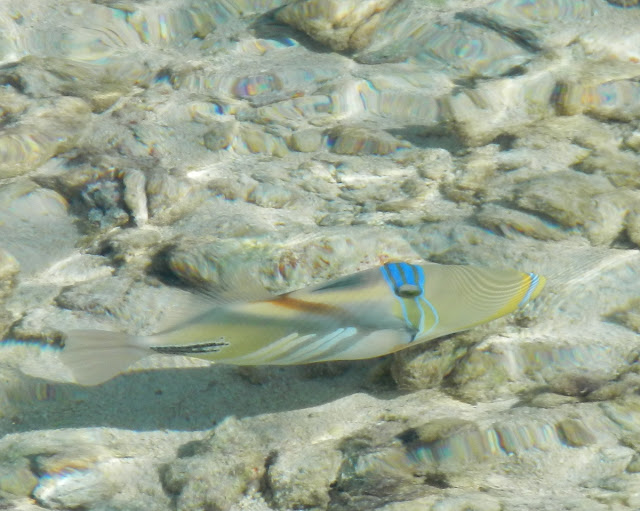 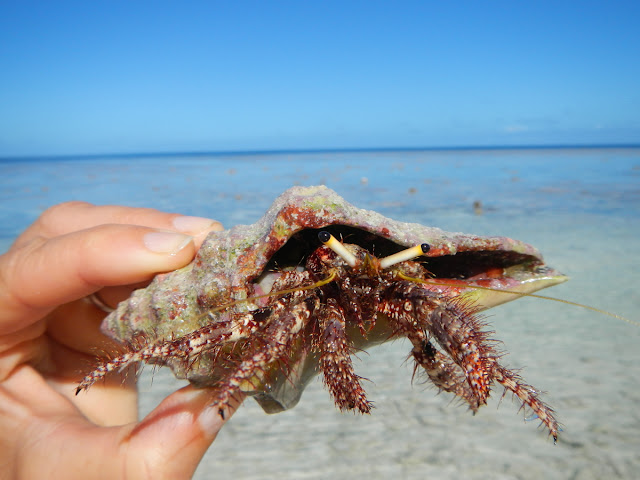 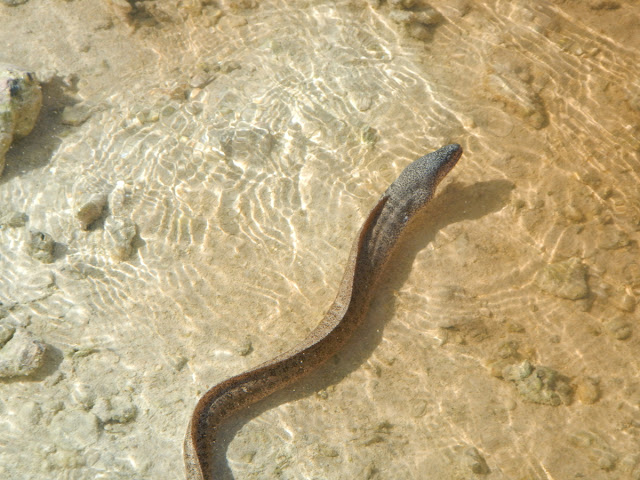 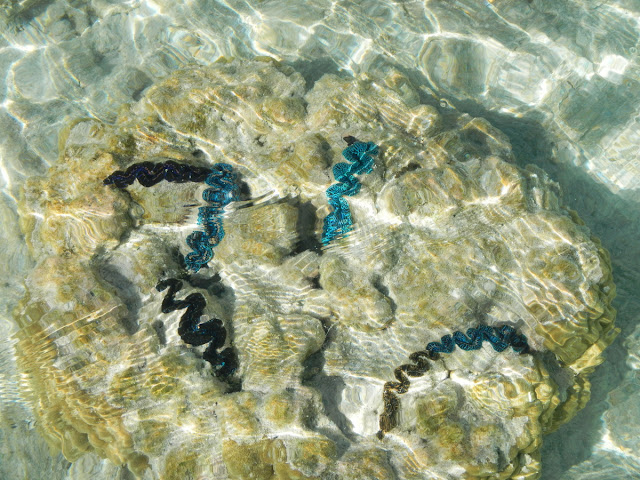 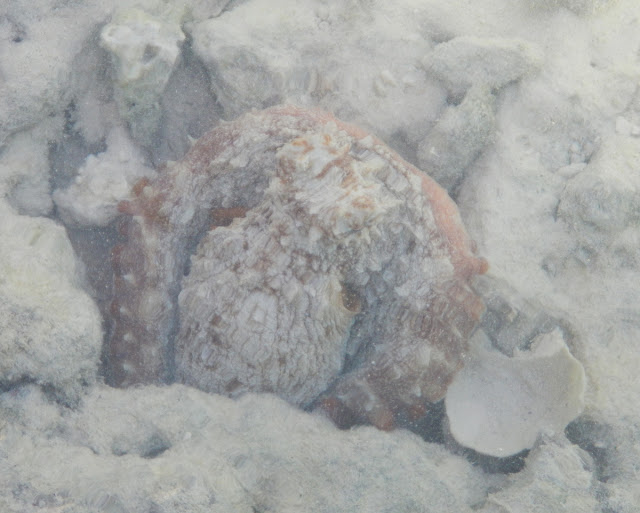 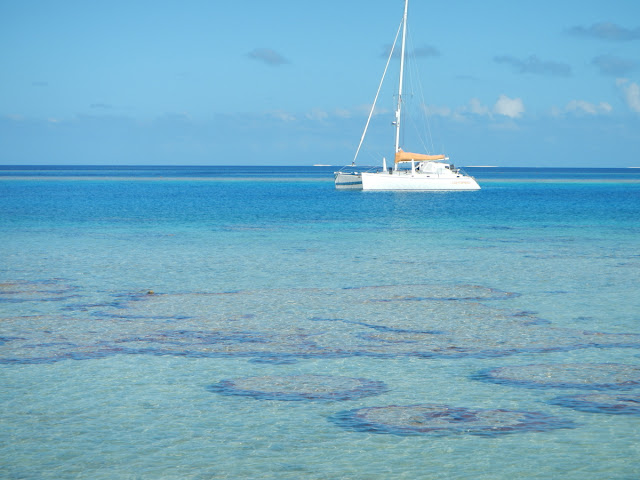