When headed ashore in Cooks bay there are two landings that work pretty well.  If you're going to the Bali Hai for the weekly Wednesday night dinner and Tahitian dance show it makes sense to tie to their seawall which they kindly allow cruisers to access free of charge.  The only problem is a lack of a secure point to lock up the dinghy which may be OK for short visits, but for a late night out at a nearby restaurant like the tasty pizza place just down the road, this could be risky.  The other option is super convenient to the well stocked supermarket at the head of the bay.  Early morning runs for fresh baguettes are made easy by landing at the small dock at the head of Cooks Bay near the 'Snack' adjacent to the supermarket. The dinghy can be securely locked to the dock pilings for longer outing and the 'Snack' serves up hand scooped ice cream for 200XPF which is a pretty good deal in French Polynesia. 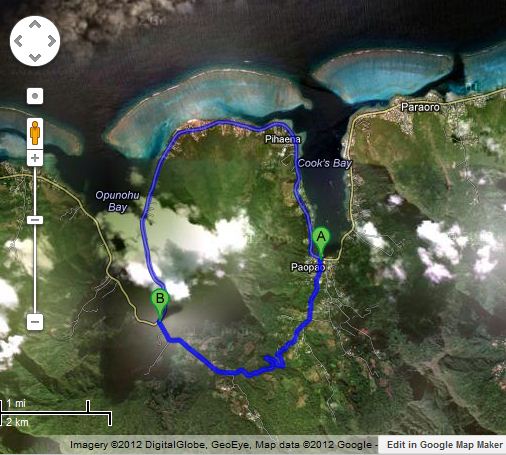 For this particular outing we had no real plan besides getting off the boat to stretch our legs and burn some calories.  Not twenty steps from the dinghy we had a single scoop of tasty vanilla ice cream in hand as we headed up the road directly across from the supermarket.  This little traveled road winds between pineapple fields and steadily heads uphill for a few kilometers offering a decent view of Cooks Bay before heading mostly downhill toward the turn off to Belvedere lookout at 5.5km.  Having already made the walk to Belvedere the week before we decided to make a loop around Mt Rotui, so we headed down toward Opunohu Bay where we picked up the main road that follows the water.  The road has a decent shoulder for walking, but there are more than a few folks who seem set on dispelling the concept of  'island time' where everyone just takes their time. From the head of Opunohu back to the head of Cooks bay is 8.5km for a total of 14.1km or 8.7 miles.  We made the circuit in 3.5 hours with a few brief stops.  On the loop there are several restaurants you could stop at for lunch or time your trip for a stop at the Rotui juice factory to sample locally made juices and liquors.

On my last sail through the South Pacific in 2006 I climbed to the 990 meter summit of Mt. Rotui.  Click for link to summit photo  As I recall that was a fairly demanding 6 hour round trip.