Sailor specifics:
Entering the Maupihaa lagoon pass at 8:45AM (Passe Taihaaru Vahine) located on the NW side of the atoll we observed a seaward center channel location near 16°46.9'S 153°58.6'W. Despite several days of SE to E wind at 20-25+ knots and a ESE ground swell of 3.5M we observed the outflow current in Passe Taihaaru Vahine to be 2.5-3 knots. With Kathy on the bow watching for hazards we utilized LightSpeeds exceptional manouverability and speed under power of nearly 10 knots to quickly and easily negotiated the short pass into the lagoon.  Less manouverable, slower or single engine vessels cold come to grief here in less than ideal sea, wind, current or visibility conditions.

Early morning light conditions were less than optimal with near 100% overcast skies, but we could still easily identify the pass by the outflow current and abrupt water color change at the sharp coral edges.

Our 104nm overnight sail from Maupiti to Maupihaa was a bit rough with 3.5 meter ESE swells on our port quarter. We both were feeling a little seasick which is typical after so many weeks of ultra calm anchorages.

I'd been dreaming about the possibility of visiting Maupihaa for weeks. The guide book's mention of a in frequently visited atoll with narrow technical reef pass  perfectly fit our criteria for an 'Off the beaten path' destination. We've only been here half a day, but Maupihaa is clearly measuring up as a idyllic last vestige of the Society Islands.

Shortly after arriving in the Maupihaa lagoon we anchored in NE corner near the first habitation we could see on the shore. Before long two local girls visited s/v LightSpeed in a small skiff. We welcomed Faimano and Puaiti aboard and were eager to have them identify a fish we'd caught and it's edibility in regards to potential ciguatoxin. We offered half the fish to Faimano and Puaiti and when Kathy pulled out the fillet knife the girls insisted on filleting the fish. (Note:  The fish was a Black Jack [Trevalli family] and was fine to eat we had several over ten days in Maupilla). 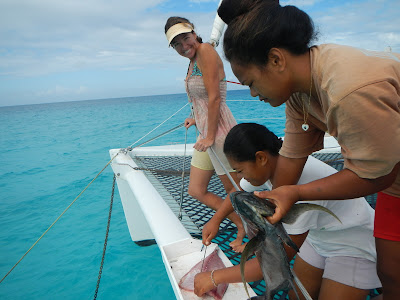 After a short nap we headed to shore to where Faimano and Puaiti and their mother Adrian greeted us on the beach with fresh drinking coconuts and adorned us with sea shell leis. Wow! Incredible island hospitality. Then a tour of the family's very modest home and fledgling garden to which we hope to contribute some soil enriching ideas and possibly some seeds. 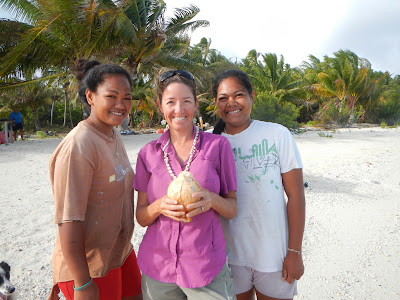 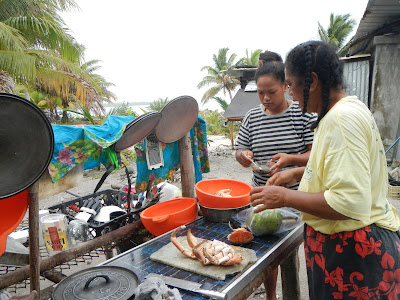 Faimano and Puaiti and their brother Hio are for both lobster and coconut crabs tonight and have invited us to join them for breakfast ashore at 8AM. Lobster and Coconut crab for breakfast! It's good to get off the beaten path!