Voyage planning aboard our sailing catamaran LightSpeed always involves a thorough analysis of the expected sea state.  We know from plenty of 45,000nm on the water that the wrong waves can cause significant discomfort and make an ocean passage miserable.  Many cruisers simply look only at a GFS GRIB wind forecast for insight on ocean conditions using simple tools like Passageweather.com.  We find it additionally important to look at GFS and WW3 wave models to evaluate impacts of  waves propagating from far off storms.

We learned our lesson the hard way several times, but most memorably on a passage from Fiji to Vauatu in 2007.  We sailed form Fiji after a brief look at the GFS GRIB wind model which indicated 20-25 knots ESE, a decent forecast for a quick sail.   However, one look at a WW3 wave model might have saved us from 2 very scarry wave induced knock downs over 4 days.  We're talking huge breaking waves 1 in 1000 waves combining from multiple directions.  The sort of waves threatened to wash the watch person overboard, filled the cockpit brimming full, sent tens of gallons below decks soaking everything, induced a jibe and stripped several jerry jugs from lashings on the rail.  All the result of fairly easy to interpret WW3 wave data from 2 distant storms in the Southern Ocean, if only we looked!  Storms cranking out big swells from both the SW, SE and combining with local reinforced 25 knot trade wind waves created havoc aboard our 40' monhull s/v 'a Vie'.  The first day out of Fiji, I vividly remember fighting to hold down some mac and cheese, my ultimate sea sick quelling fare.  Kathy was struggling with the confused sea motion and mountainous waves as she repeatedly puked in the galley sink for the first 36 hours of the voyage.

Armed with a bit of easily obtained WW3 wave information, those sailing trade wind routes can easily avoid ugly uncomfortable passages like ours to Vanuatu.   We'll define some terms, suggest visualize tools and share some of our rules of thumb to ensure a comfortable passage.

A side note to the Catamaran vs Monohull debate:  Having crossed the Pacific in a 40' monohull, I'd suggest that wave direction and period is more important for comfort aboard the 42' catamaran we now sail.   None the less the catamaran is way more comfortable overall.

HeighT SiGnificant Wave (HTSGW)  measured in meters is defined as mean wave height of the highest third of the waves.
WaVe PERiod (WVPER) the average period in seconds between crests.
WaVe DIRection (WVDIR) the direction from which the waves are originating.


Visualization Tools
ViewFax found at http://siriuscyber.net/wxfax/viewfax5056.exe although not perfect is what we use to obtain and visualize NOAA WW3 wave information.  Given limited internet access we primarily use Airmail's built in 'ViewFax' and our SSB to download small 10KB snippets of ocean conditions.   However, 'ViewFax' does a poor job of visualizing the wave period (WVPER) so we take the WW3 data  and load it into MaxSea 10.3.2.1 to evaluate the wave period, direction and height.   Perhaps, there's a better tool someone could recommend?

Here's a screen shot of the ViewFax WW3 request window. 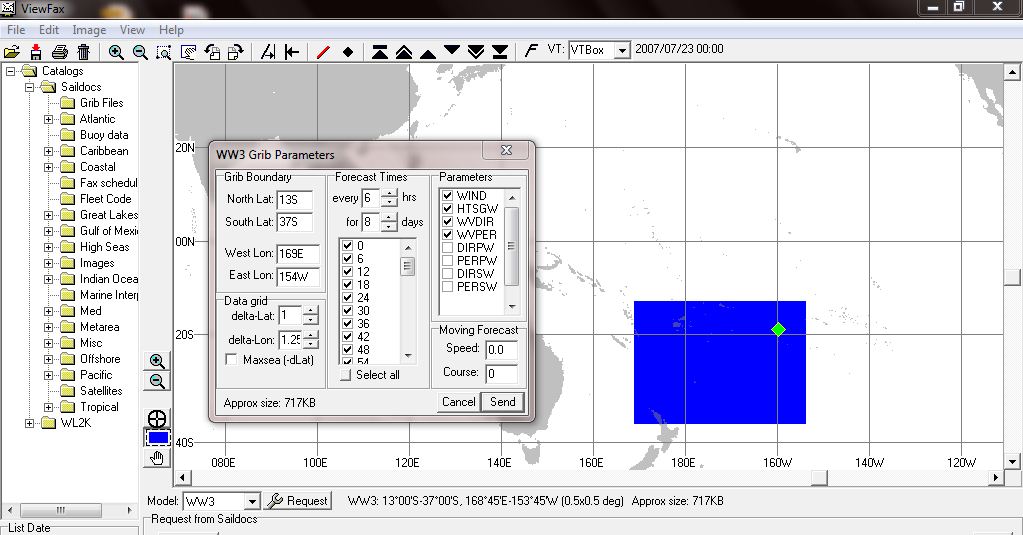 Other:
Whenever possible we look not only at the Primary wave data, but dig into the Secondary wave properties.  We have yet to find a good tool to visualize combined data from both the Primary and Secondary waves.  The sort of tool that would have prevented us from getting our butts kicked in 2006.  For a macro understanding take a look at this animated 180 hour prediction provided by the NOAA WW3 data.  You can toggle for wind, primary and secondary, period and height.  http://polar.ncep.noaa.gov/waves/viewer.shtml?-multi_1-latest-pacific-tp_sw1-

Screen snip of Primary Wave Period  for the Pacific Ocean. 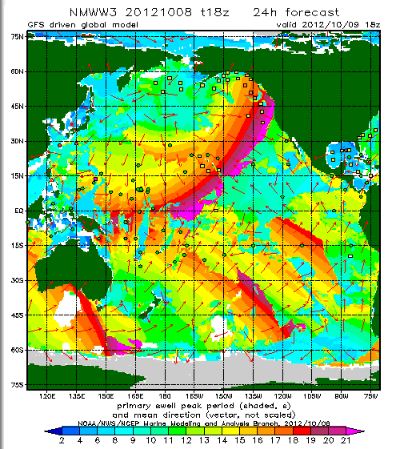