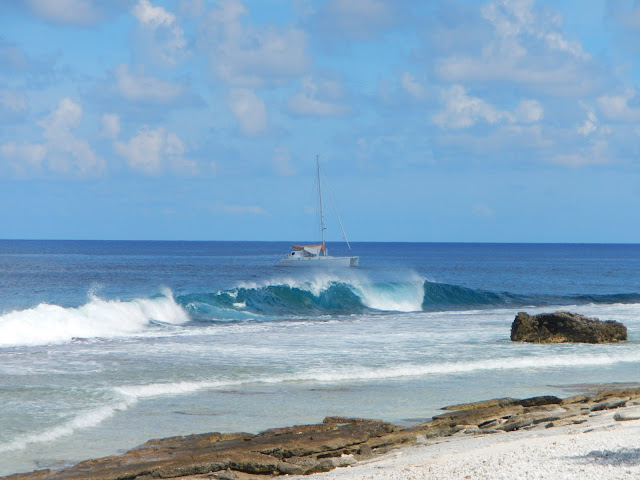 Anchored off the SW corner of Napuka atoll

NE winds kicked in a few hours ago, so we decided to try anchoring off Napuka atoll to wait for the wind to shift to the ESE sometime in the next 24 hours. Our course for the next 300nm is just east of north so the current northeast wind is no good. Some of our blog followers might recall we tried unsuccessfully to anchor off Napuka atoll back on June 26, 2012, but a pesky SE swell and poor holding coral rubble had us bail on the plan. It was a pretty good post for those who might want to check out the blog archives or use the custom search box to search for key word 'Napuka'.

As we approached Napuka I refreshed my memory of the anchoring possibilities using the MaxSea bathometric charts we created on our last visit. Integrating a sounder with MaxSea 10.3.2.1 is pretty easy and definitely worth it for sketchy anchorages. We cruised around the SW corner of Napuka and picked up some new soundings and observed the different swell directions and got a good dose of reality by watching the surf crashing on the reef. We finally decided on a spot at the SW point of the atoll in about 40' of water and dropped the anchor at a 4:1 scope and gave it a good tug. It was super solid so with only 10 minutes until sunset, Kathy and I donned mask and fins and jumped in the water to take a look at the anchor set. I was going to leave the engines idling as a safety precaution in case the anchor started to drag at least until I noticed our cat Shell sitting on the binnacle dangerously close to the electronic throttles. The throttles are pretty sweet and only require finger tip pressure to actuate. One slip and the cat could have our twin diesels at full steam ahead to who knows where. So at the last minute I shut down the engines then jumped in the water.

A pretty good current sets to the south so we had to swim pretty hard up stream to find the anchor. It dropped next to a coral head the size of a car which has me concerned that if we swing around that the anchor might find a permanent home stuck on the coral head. The water was super clear with tons of fish, but since it was way past shark thirty we didn't linger any longer than necessary.

I have two anchor alarms set, but being this close to the reef I'll still sleep with one eye open. We won't keep a formal anchor watch, but Kathy and I both good about getting up several times a night to evaluate any developing situations.

If the weather holds NE as expected then we'll get a chance to check out the atoll tomorrow.