August 15
The morning was grey, cold and blustery, so we stayed aboard getting precious little accomplished due to slow internet. Eventually, the skies cleared a bit and we decided to go berry picking. Most land on Unalaska island is owned by the Ounalaska Corporation (Native) and off limits without a $6 p/p day use permit, with no car and no idea where to pick blueberries, we opted for the small city park next to boat harbor, it lacked the elusive blueberry, but we did pick 9 cups of beautifully ripe Salmon berries. We made our first ever attempt at jam, ours seemed a little runny when we were filling the jars and was not 'sheeting off the spoon' as our directions indicated it should, not enough reduction? not enough sugar? a big mystery. We used 2/3 cup sugar for each cup of Salmon berries, mixed everything in a pot and brought it to a boil, then transferred to pint jars and pressure canned them for 8 minutes at 5 pounds. Any and all advice welcome.

August 16
Dave was ready to spend the winter in Dutch, lots of job options and even some unsolicited offers. Everyone we met was really friendly and super positive about finding good jobs, earning a bit of income is now a priority as we wrap up 9 years of spending. Winter in the Aleutian's seems the pinnacle of adventure to Dave, but the Admiral said 'No way! Too cold! We're not staying, don't even think about it'. 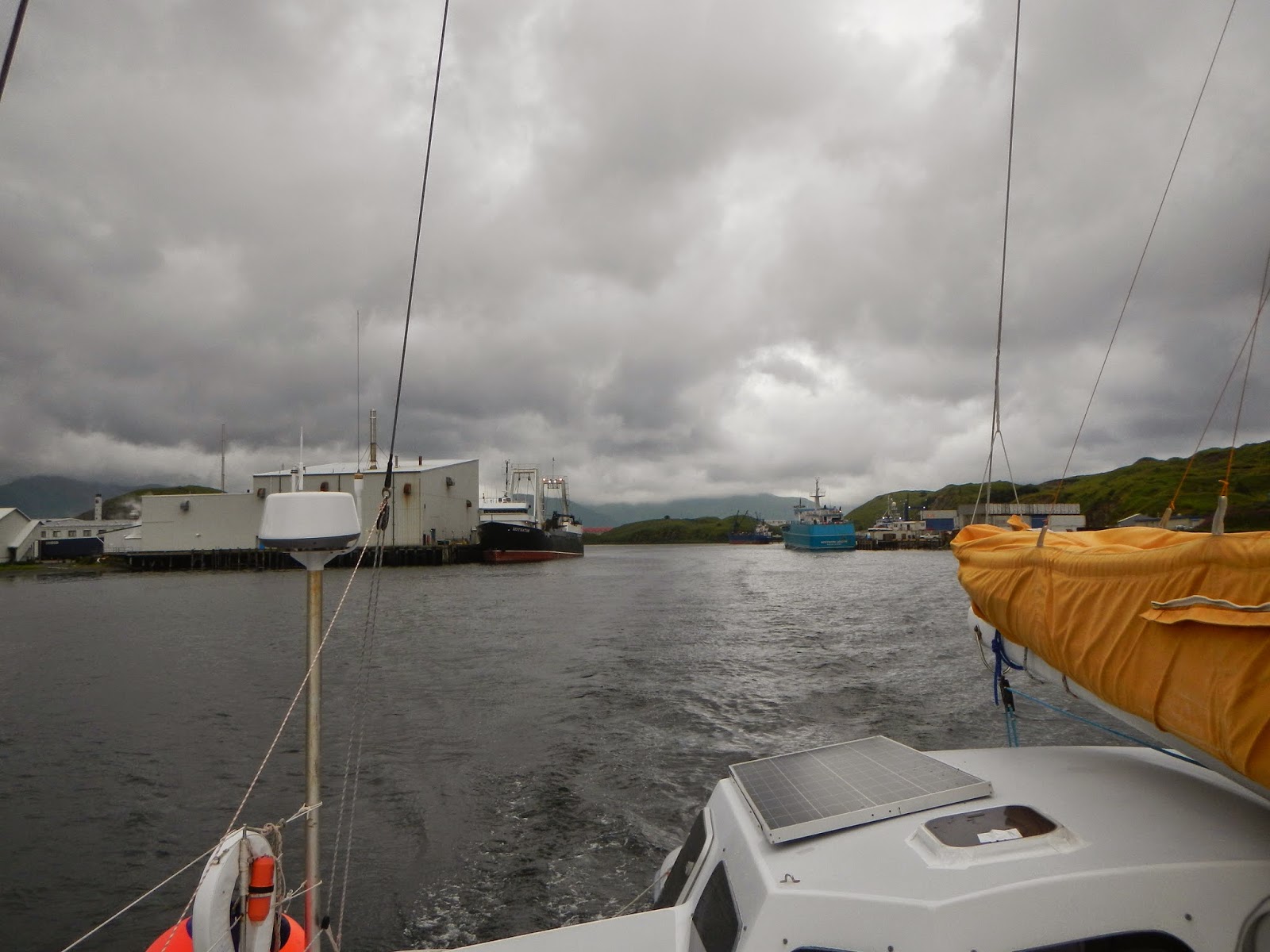 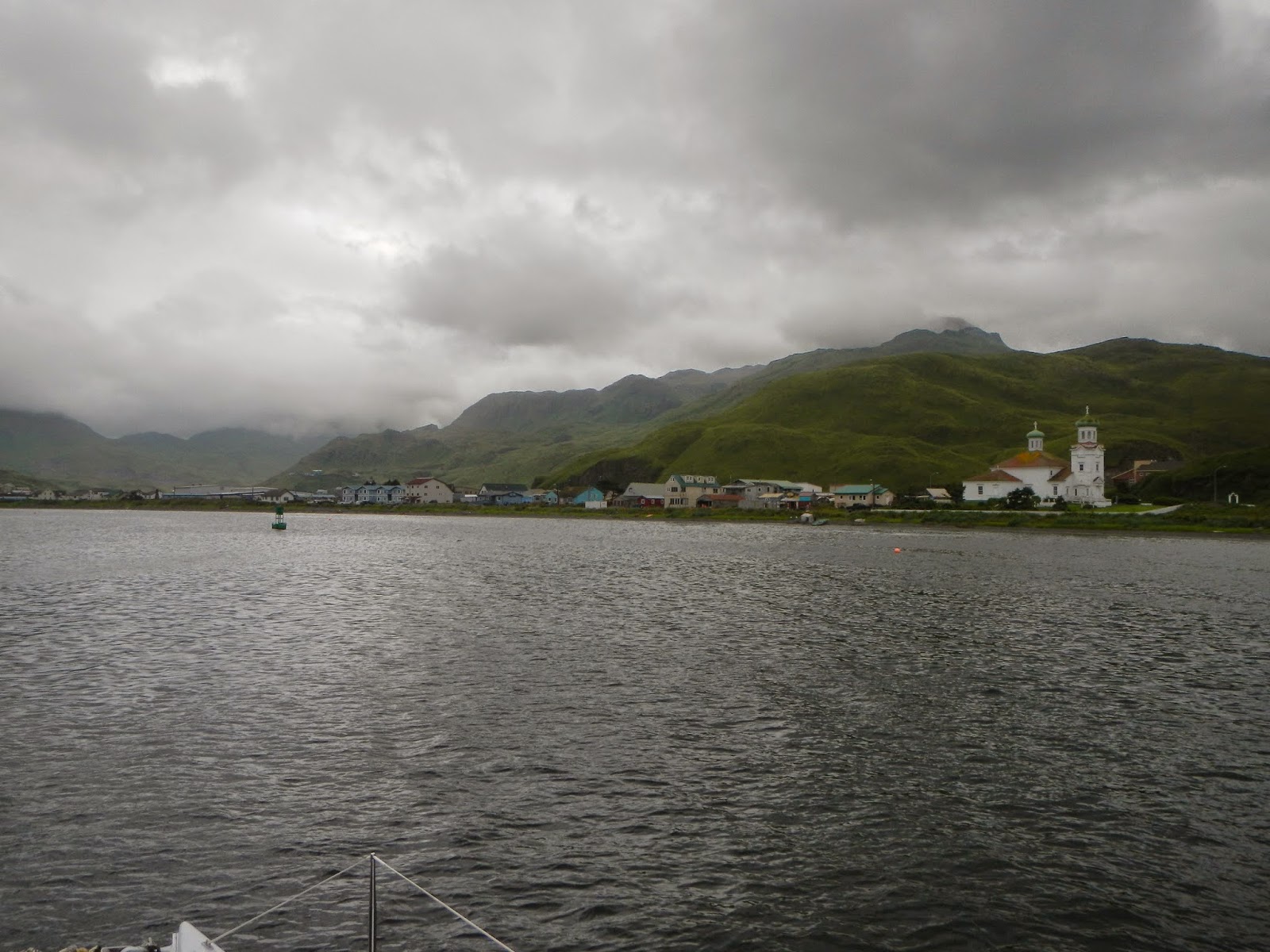 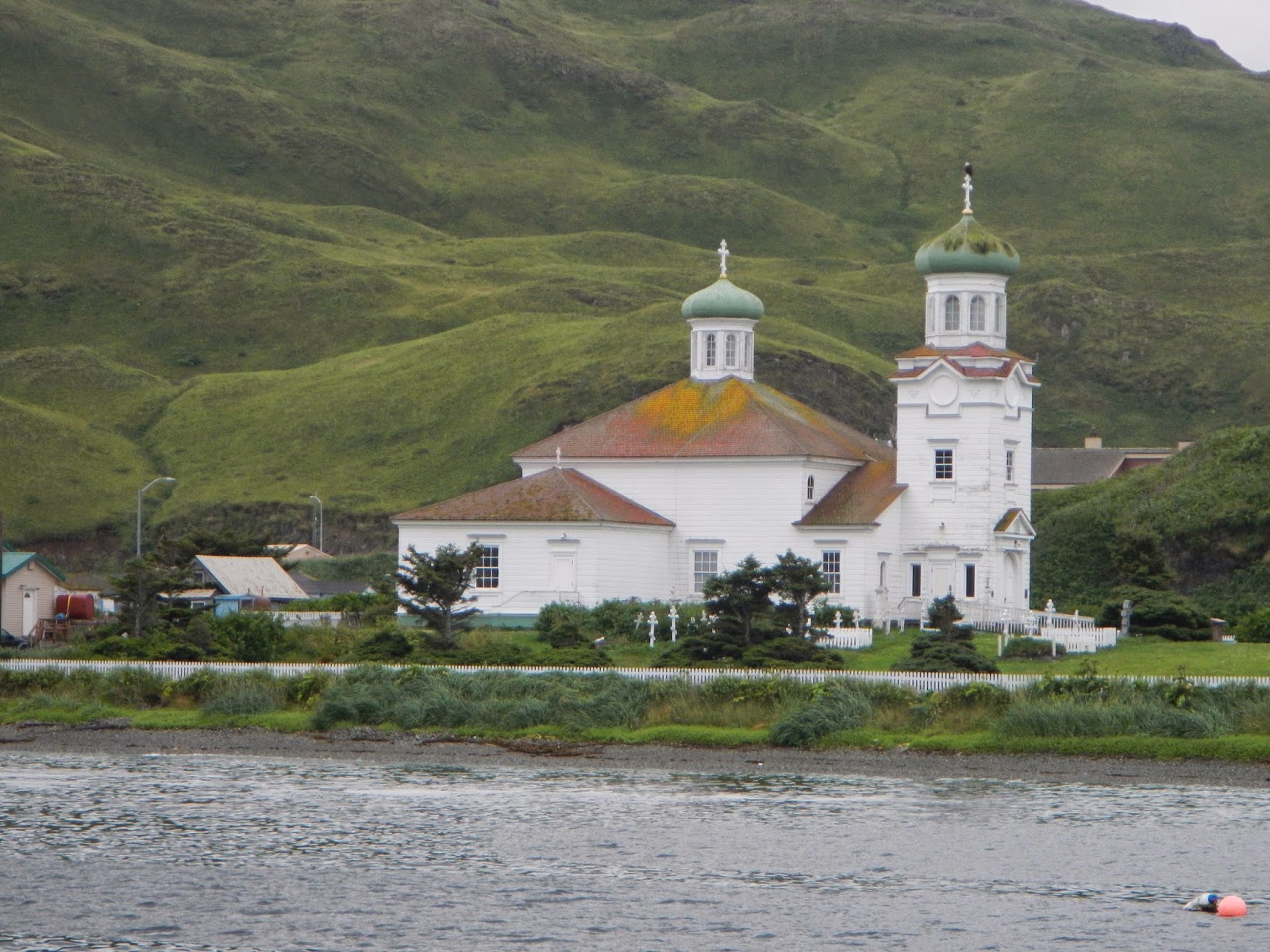 Russian Orthodox Church of the Holy Ascension built in 1825 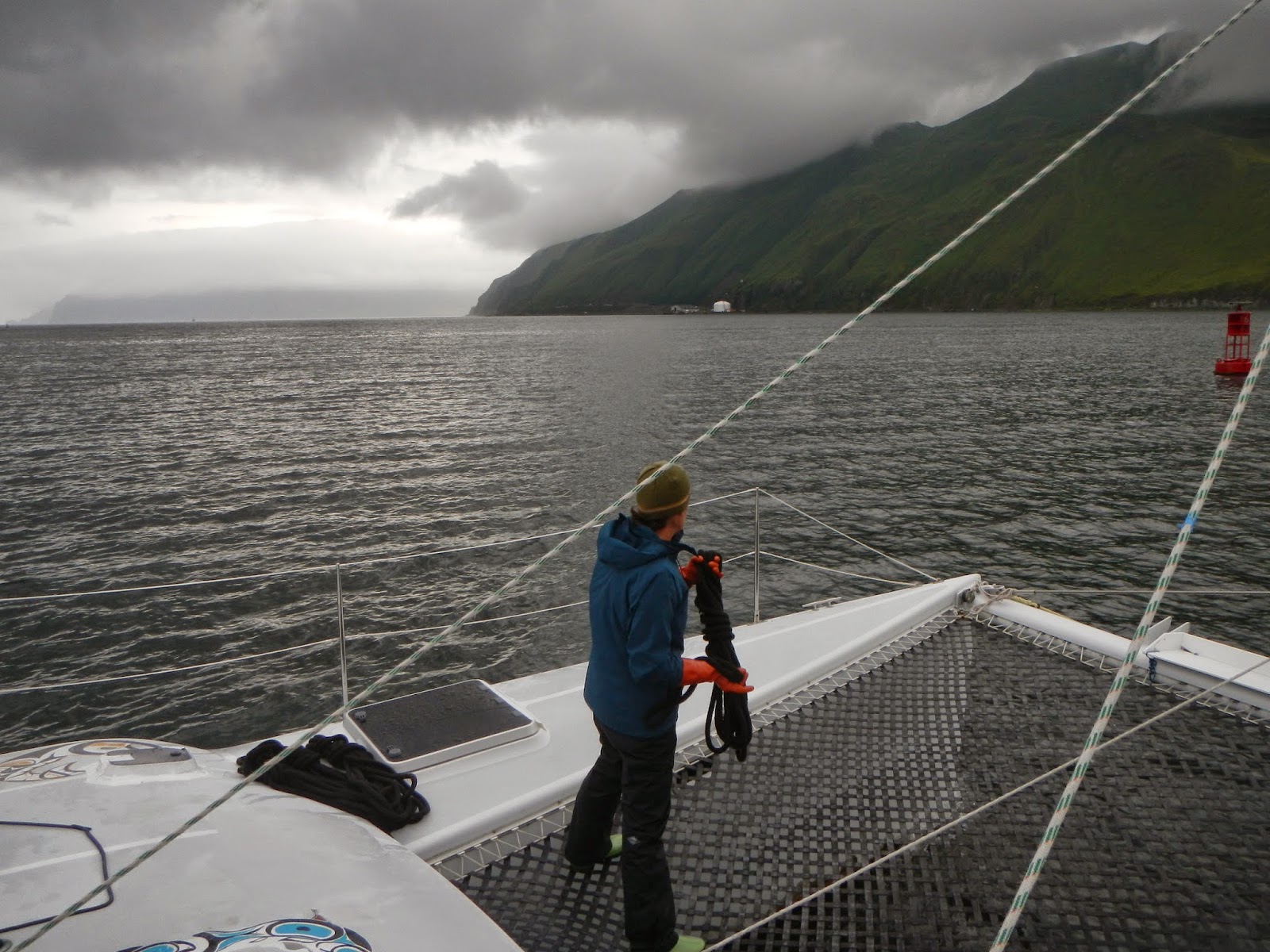 Kathy coiling up dock lines with storm skies on the horizon.

And so it was that LightSpeed sailed out of Dutch Harbor around noon battling 20 knot head winds.


It's 10 miles to get out of Unalaska Bay and we were happy to round Cape Kaleta and ride the ebb tide through Akutan Pass. Akutan Pass is definitely one that requires proper timing due to very strong currents. The early morning ebb hit a whopping 8 knots followed by a flood of nearly 7 knots and then the tame 4 knot ebb that propelled LightSpeed nicely with a 20+ knot NW tailwind. Perfect.

Our initial idea for the day was an overnighter to Sanka Island about 160nm distant. However, as the day progressed we looked at a few options to break up the trip. After-all it was Dave's Birthday and would be nice to relax at anchor for the night.

Chimney Cove on Avatanak Island is spectacularly beautiful with 2 huge rock pinnacles and an inviting sand beach, but swing room would be tight and south swell was making into the cove with vigor.

Avatanak Bight a bit further to the east on Avatanak Island looked ok initially, but the valley at the head of the bay was shepherding in the occasional gust of wind to 30 knots when zonal wind was only 20. In strong NW it would appear Avatanak would be wracked with williwaws. We didn't expect stronger winds, but random 30 knot gusts would not be conducive to a sound nights sleep.

Derbin Bay on Tigalda Island was our last chance to anchor and it turned out to be acceptable if you don't mind southerly ground swell making into the bay and attendant crashing of huge waves against the nearby rocks. The motion was a gentle on LightSpeed with her 24' beam, but that same swell would make a miserable night on a mono. Wind protection was good for NW with no gusts, so we dropped the hook in about 25 feet just off the black sand beach in the NW corner of Derbin Bay 54 04.92'N 165 08.33' W.

August 17
The alarm sounded at an early 5AM, nearly 3 hours before sunrise here in the Aleutians. Rising early was the trade-off for catching some decent sleep in Derbin Bay vs going overnight. Derbin is wide open to the south, so navigating out in the dark was safe and easy with the assistance of radar and some moonlight to guide the way. Our planned destination of Sanka Island looks really good on the chart with a number of interesting harbors with names like Salmon Bay which provide positive indications that many fresh salmon dinners in our future.

As I write we're 15 miles out of Derbin and struggling against opposing tidal currents. We need a 6 knot average speed to make the 100nm to Sanka Island with enough daylight to navigate the extensive off lying shoals and make safe harbor. At the moment we're motor sailing and using BOTH engines in light winds, pushing 8.2 knots through the water, but only making 6 knot good. It's working, but we're burning lots of fuel. When Kathy wakes up we'll probably launch our biggest spinnaker and shut down the engines. Sunset tonight is 10:47PM and at our current speed of 6 knots we should arrive around 8PM.