Our boat cat Shell woke me up at 4AM with exfoliating sandpaper licks to my nose.  I was planning on a day off while Kathy visited her nephew Rowen and new grand nephew Brock at her parents Santa Rosa home.  It really worked out great as Kathy had a chance to catch up with cruising friend Teri of s/v Blue Bie and catch a ride to Santa Rosa.  Teri and Philip cruise a Outremer 43 catamaran and we enjoyed sailing with them this past year in the Marshall Islands.

It was 4AM, I pushed Shell away from my nose and reached for my android tablet to check the weather.  NOAA was calling for 'up to 5 knots' and so I pulled myself out of bed and quickly got LightSpeed underway.  Finding 5 knot winds for the 97 mile run from Eureka around point Mendocino to Fort Bragg was worth the early morning start.

Heading out of Humboldt bay was easy enough with clear night skies, a well lit channel and radar.  On the Pacific it was pretty bumpy, I think it's the swell from the super typhoon, I was actually feeling a little queasy as I made breakfast and coffee.   It was too dark to see anything and with the ground swell lifting the boat every 13 seconds, watching the horizon would have been therapeutic. As the veil of darkness slowly lifted I started to gain my sea legs as a welcoming dawn warmed the morning sky.

While in Crescent City the day before we'd had a chance to meet up with Jimmy and Phoenix for dinner.  Jimmy is a mad fisherman (a good thing) and brought us two huge chunks of King salmon.  A Huge thanks for the beautiful fish!

Overnight I'd brined the wild line caught Chinook salmon in preparation for smoking since I thought I'd be staying in Eureka for another night.  The fish was ready to go, so I set up the 'Lil Cheif' smoker on deck and hauled out the Honda eu2000i generator to power the smoker.  It was pretty rolly, but I managed to rinse the fish and get it in the smoker racks without incident.  Finding the power cord for the smoker proved to be a bigger challenge.  There is nothing worse than searching lockers for some obscure items while in a seasickness inducing seaway.

I found the cord, plugged in the smoker and sat down for a break.  No such luck as the wind picked up out of the east, so now it was time to hoist sail.  The fresh air helped, by the time I got to my coffee it was cold.

For awhile we were ripping along toward Cape Mendocino at 9 knots and then it was over.  Bye bye wind.  No mas.  From there on it was a power boat ride the entire way.

The smoked fish turned out great and I even pressured canned 5 half pint jars and gobbled up some thin slices I'd prepared as fish jerky. 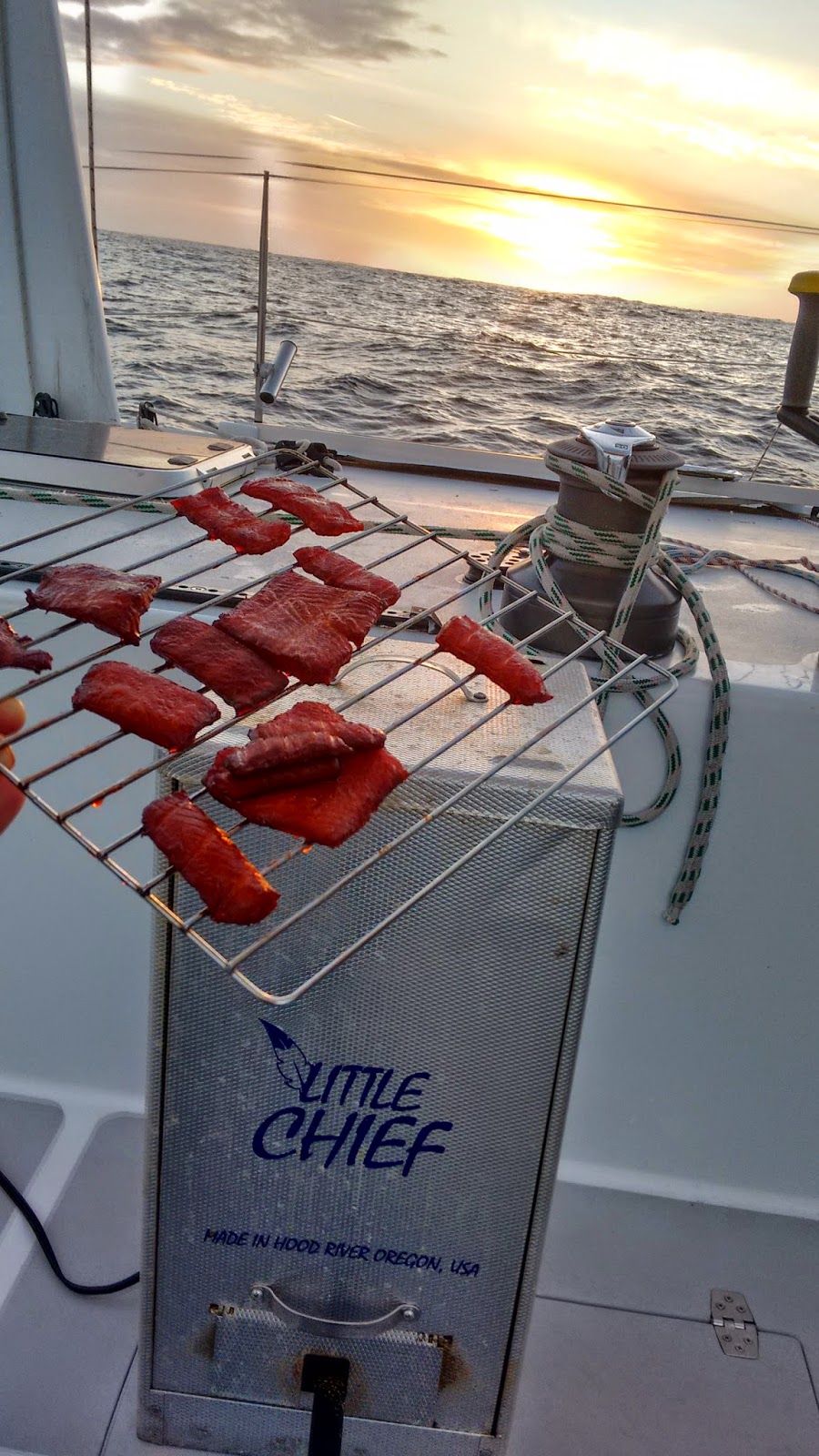 Approaching Fort Bragg in the dark is not fun.  Running over a crab trap float in the dark close to the enterence channel is even less fun.  Luckily it came free pretty easy.

Glad to be safely tied to the dock.
Posted by David Kane at 9:22 PM