August 4, 2006.
Mauipiti Island (S16 29 W152 15)
Having just sailed 26 miles from Bora Bora we arrive at Maupiti which looks to be a miniature Bora Bora, but in stark contrast to the other Society Islands is lightly inhabited and has no tourists. Approaching the lagoon pass we find the south swell is sending huge waves crashing on either side of the narrow pass where a 5 knot + ebb is causing 10-12’ standing waves just outside the entrance. Observing this through the binoculars gives us considerable pause as a slight navigation error or engine failure would most likely mean the loss of the boat. Our favorite guide book Charlie’s Charts of Polynesia advised that a moderate south swell could be dangerous and that “many boats had come to grief… entering this pass.” We don’t know what they mean by “grief” but it doesn’t sound good. We were significantly intimidated and ready to sail on, skipping the island altogether, as it seemed too dicey to attempt to thread the needle of a pass. About this time another boat in close proximity was also considering the pass and after a brief radio conversation they told us they were going for it. We sat back to wait and see how these very experienced sailors would perform. Watching them successfully make the entrance gave us courage. The pass was later dubbed “brown shorts pass” by another cruiser and all agreed it was the scariest pass or river bar any had ever transited. Once inside the lagoon we were rewarded with friendly locals and an atmosphere reminiscent of the Marquesas Islands. We attended a dance practice, did some good snorkeling, attended a dance finale (where I got to dance with an authentic Polynesian dancer) and generally enjoyed waiting for the weather window to open for our passage to Penrhyn Island.
Once the trade winds began to resume their normal flow pattern after the passing influence of a distant high and low pressure systems we had the green light for a nice fast passage to Penrhyn. The one obstacle remaining was safely exiting the pass which now had even larger breakers. We had subsequently heard stories of yachts being trapped in the lagoon for up to two weeks due to the dangerous pass and thus our departure promised excitement far in excess of my interests. A quick look at the pass via the dinghy confirmed it would be a wild ride much like the entrance with huge breaking waves on both sides, foaming white water everywhere, strong currents, whirlpools and mountainous standing waves. We were “clipped in” with our safety harnesses attached to the boat, all the hatches battened down as precautions as we were safely shot out the pass with 5 knots of current behind us. Our well earned reward was a pod of spinner dolphins that were surfing and jumping out of the faces of the standing 12’ waves just as the boat was nearly catching air off the same waves, making for quite an exhilarating show and ride. 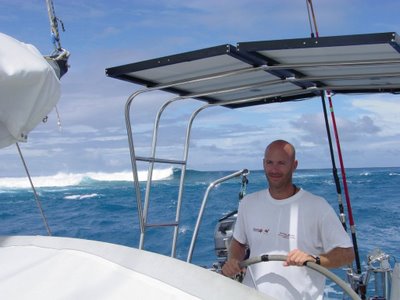