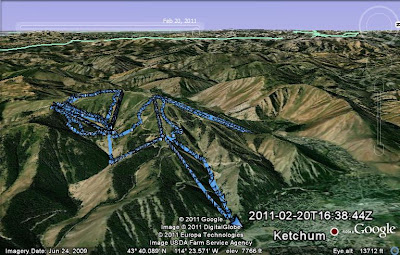 We've been skiing in Sun Valley, Idaho for the last few weeks. This past weekend we enjoyed skiing with my sister Laura, brother in law Jim and nephews Bruce and Andrew. Ski conditions were awesome with about 16" of new snow. Bruce captured our ski runs using a tiny Garmin GPS from which we uploaded the tracks to Google Earth. Pretty cool!
Posted by David Kane at 10:51 AM

What about the dangers of Piracy and Pirate attacks?

Usually, we try to avoid writing about risks of our cruising lifestyle as statistically it is extremely safe. However, recent events bring the piracy to the forefront of our minds. Several of the most recent attacks aren't just statistics these are real people we've met in our travels.

Our hearts go out to the families of Jean and Scott Adam of s/v Quest and their crew whom were tragically killed by pirates whom hijacked their yacht off the coast of Oman. We made the acquaintance of Jean and Scott while docked in Opua, NZ for cyclone season in 2006-2007.

Less understood is the apparent murder of American Don North of the Morgan 385 Windancer and Frenchman Jean Pierre Bouahard of the 50-ft aluminum catamaran Levante in Panama by a fellow cruiser? Javier Martín from Spain is being held in Panama on suspicion of murder. We met Jean Pierre in the Isla Linton Anchorage in 2009. Again, our condolences go out to the families.