Rounding Cape Cook on Brooks Peninsula today so we made an early start as winds off the peninsula can build to gale force in the afternoon. Winds were light at the start and even so the swell and waves built noticeably in the vicinity of Solander Island off Cape Cook. Once abeam of the peninsula winds were only 5 knots and I was tempted to drop a line briefly. Surprisingly, based on recent experiences, I didn't immediately catch a salmon so we decided to move along. Winds by 11AM have built to North West at 25 knots steady and we are making way nicely toward Kyuuot (pronounced Ky-you-kit) with following winds and seas. In these conditions the boat sails effortlessly, flat and fast. No rocking, rolling and cork screwing along like our old mono a Beneteau First 40 that we sailed extensively downwind from Seattle to Australia from 2005-2008 covering over 15,000 nautical miles. She was a good boat and super well outfitted, but a entirely different beast than the Chris White Atlantic 42 which is simply dreamy to sail down wind and for that mater on all other points of wind as well. As I type sitting on a bar stool, and not in any jeopardy of tipping over, I notice my half full coffee cup sitting on the counter. I haven't the least concern that it will spill... not even if we get gale force winds later today. Properly designed catamaran are so comfortable. No more securing everything for a passage, white knuckle bracing, falling, bruises otherwise know as 'boat bites'. Everything is a trade-off, but we sure love this boat.

Rising a little earlier than my eyelids would have liked we set out to explore the intertidal zone at the nearby East Creek. Kathy brewed a pot of coffee to take along on the adventure and our timing was perfect to arrive at the beach at low tide. Lots of clams and geoducks (pronounced gooey ducks) on the beach would make great meals if not for the concern with Paralytic Seafood poisoning (PSP) or colloquially know as 'Red Tide'. We did dig up a few for the purpose of baiting our crab trap which had produced nothing overnight and was being relocated to deeper water in the inlet off lying East Creek. 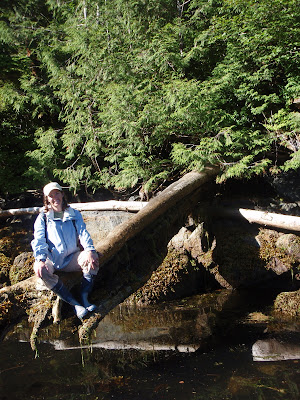 Next was a bonified bush wack in search of berries. We're talking full on pushing through brush and stumbling over logs as the brush was so thick you couldn't really see your feet. Climbing up a steep hill in the pursuit of huckleberries we crested a ridge and spotted a small lake below. Hoping for berries along the lake we crashed down through the brush in more or less a controlled slip and fall routine. The lake was more of a pond and full of pollywog, frogs and even some lily pads. 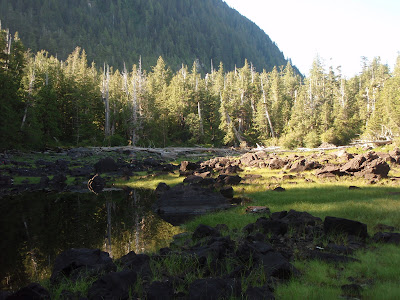 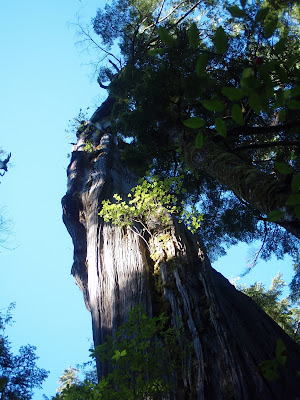 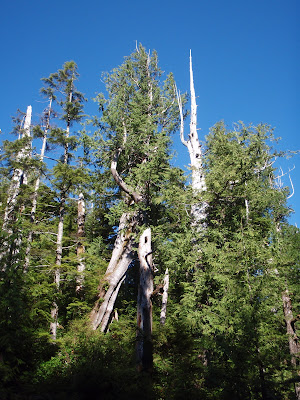 A bald eagle even swooped by the lake to check out these strange visitors. After our extensive exploration we were something beyond famished and returned to the boat for a big breakfast and even bigger plans to explore East Creek on the rising tide.

Near high tide we zoomed up East creek looking to explore and try again at some berry picking. Before long a wind fallen tree appeared to block the entire width of the river. Managing to squeeze through the branches under the main trunk we were showered with pine needles and a few small limbs. 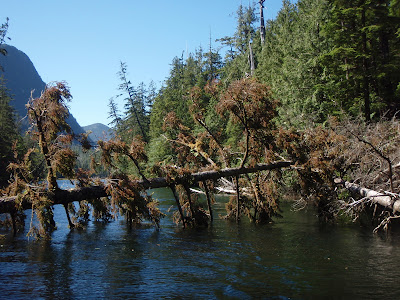 Heading up the river we were in awe of the virgin old growth trees that lined the Creek. Super size trees that are so rare you pretty much need to be in a National Park to find them of this size. Around the next bend was another wind fallen pile, but this time comprised of massive super old growth trees all piled in a jumble across the creek. 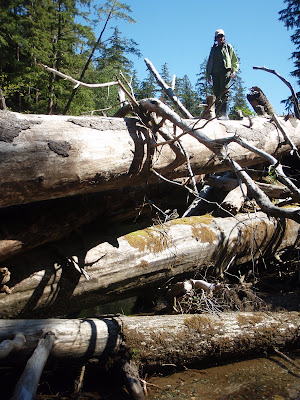 It looked impassable, and was except the river had charted a new course around the behemoth trees of which we followed to yet another blow down. 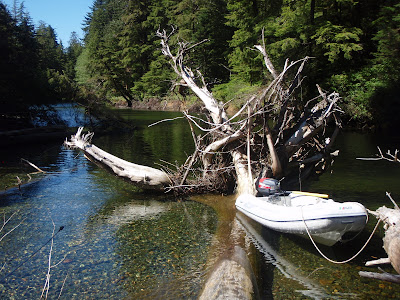 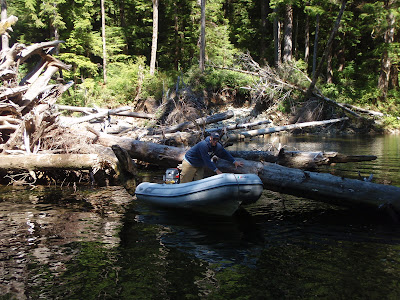 This log was so low to the water I had to stand on the outboard engine and then climb over the log as we squeezed the dinghy under.

We definitely would need to be very cognizant of the tide level as it would be easy to get trapped up the river by either rising or falling waters. Not far after we approached a fully impassable log jam. Maybe with an axe and a short portage we could have explored more, but with time being of the essence to get back out of the river before the tide fell we headed downstream. From here we explored the flooded inter tidal marsh 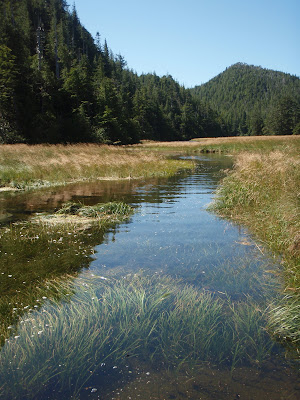 and then headed out to check out some beaches for more berries. We finally collected some yet to be determined red berries, sort of like salmon berries and quite tart. Back on the boat Kathy used the Berries to whip up a blended smoothy of fresh bananas with the mystery red berries. Delicious and apparently fine as we are still alive.

Rising early to a brilliant blue sky day we hoisted anchor and an empty crab trap. I suspect the reintroduction of Sea Otters along the West Coast of Vancouver island and now their abundance likely is related to the apparent lack of crabs. As I understand about 80 Sea Otters were reintroduced between 1969 and 1972 and have since grown in population nearly twenty percent per year since with numbers now approaching 2000 sea urchin, clam and crab eating critters.

Sailed down Sea Otter Cove to Winter Harbor to fuel up and reprovision. We did succeed in filling up the tanks and ironically with Biodiesel which can be hard to find in other regions, but is prolific along Vancouver Island. Our cruising guide is over ten years old and the brilliant store described in the guide carried only a nice assortment of staples, but what do you expect for such a remote location. The helpful gas dock jockey slash grocery store attendant was kind enough and even donated a bunch of mostly brown bananas to our cause. Looking forward to some banana bread. However, the proliferation of big biting horse flies had us on the move in no time. We roared out of the inlet at full steam ahead swatting at the flies and trying to blow them off the boat. Sadly I can report that even with a headwind of 9 knots and boat speed of the same the huge buggers were still able to keep up with us in the 18 knots of apparent breeze. We resorted to heavy handed swatting and merciless killing with the swatter. Glad to be rid of the flies we then scrambled to plot a course to somewhere and quick. Prior to the horse flies it was our intent to overnight in Winter Harbor. Feeling ambitious we headed for Klaskish Inlet as it seemed the most interesting of the many choices and with sunny skies and a nice Northwest wind to sail we had little druthers about another 22 nautical miles of sailing before dropping the anchor. Along the way the fish were jumping and despite having some nice Halibut fillets in the fridge I felt obliged to try my hand at a fresh bright silver Coho salmon or maybe even a Chinook. It wasn't long before we had a whopper of a Coho on the line, but it was a wild fish and I think I can only keep hatchery marked fish so we released him after ensuring he'd recovered his strength. The best way to revive a fish is to gently hold him by the tail in the water and slowly move him back and forth to get water flowing through the gills. He'll let you know when he's revived and ready to swim away. 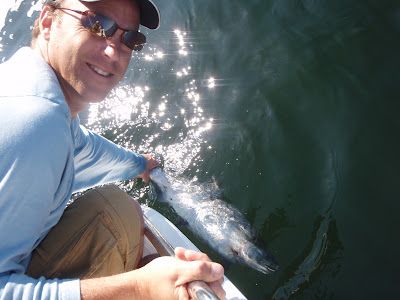 Pulled into the super cool anchorage at Klaskish Basin and dropped the crab trap. However, having seen a few Sea Otters I was not too hopeful of finding any crabs in the bay. Enjoyed a great Halibut dinner and peaceful nights sleep. 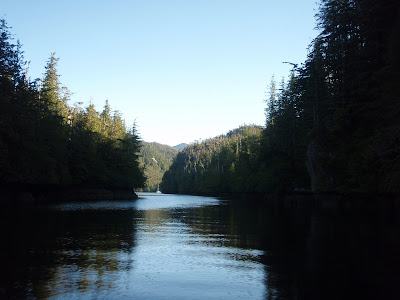 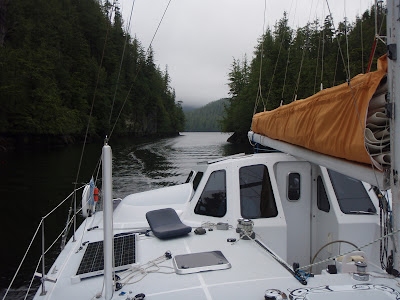 Narrows at Klaskish Basin are a piece of cake. 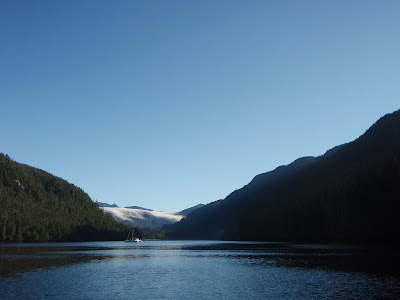 Wrapping up our day of beach combing and dinghy exploration at Sea Otter Cove, we were just back on the boat when s/v Madchen hailing from Bellingham, Washington pulled in and tied up to a mooring buoy. I ran the dinghy over to make the acquaintance of Kara & Craig whom were circumnavigating Vancouver Island and looking to do some surfing in San Josef Bay. Not soon after another vessel made it's way into Sea Otter Cove under jury rigged outboard power. The outboard was suspended from the stern davit via some 2x4's and plywood, quite an ingenious solution to a blown auxiliary diesel. The boat was an older over 40' of ferocement construction and steered via tiller to a barn door rudder, I'm sure quite the handful to navigate with the jury rigged outboard. 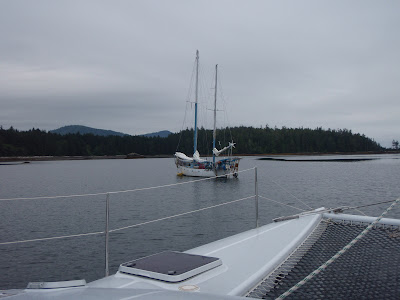 So I launched the dinghy and zipped over to ask if I might be of assistance in 'lassoing the mooring' the skipper was grateful for the help and we quickly got the boat secured. A not so short discussion ensued and truth be told this fellow was as interesting as one might expect to be found along these shores. He told me of the fated voyage from Bull Harbor that had him drifting aimlessly all through the night when the winds died. He was also very Eco-friendly and very into Waste Vegetable Oil(WVO)powered vehicles and vessels. Could a slap dash conversion to WVO have something to do with the blown diesel engine in the sailboat? Needless to say a good chat. Back on the boat we retired early to catch up on post overnight passage sleep.