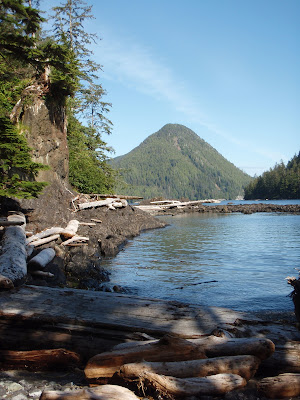 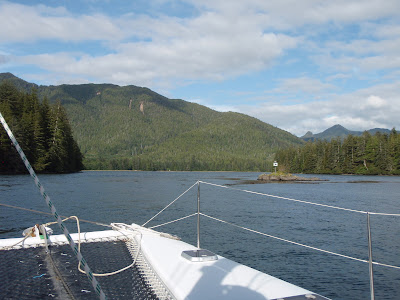 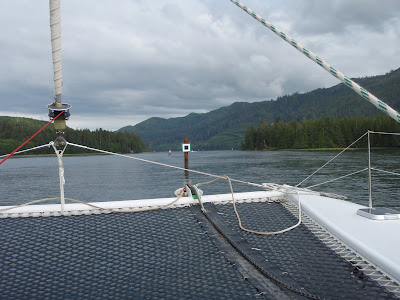 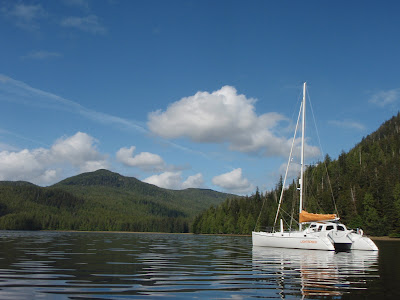 LightSpeed anchored in Security Inlet which is the NE arm of Englefield Bay. Anchorage can be found in 5-12 meters near the head of the bay with excellent holding in stiff mud near the creek. Anchorage location near 053 03.4594 N 132 16.0183 W 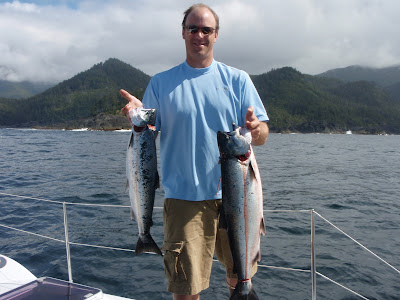 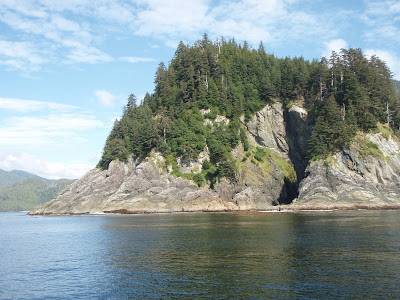 Carswell Island in the Northern portion of Englefield Bay. The substantial amount of clean rock shows the battering these islets must take during winter storms 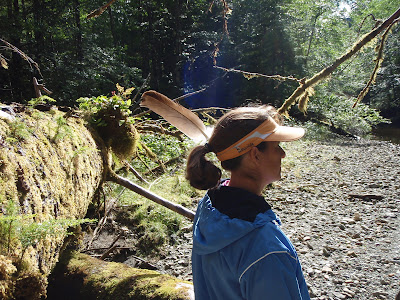 Kathy sports a Eagle feather found on the forest floor as we explore the creek at the head of Security Cove. 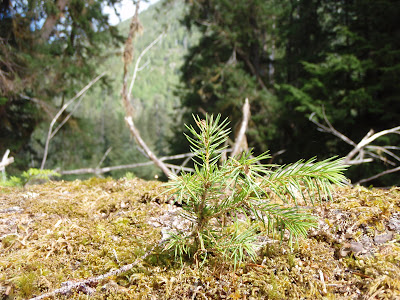 New growth springs forth in the lush rainforest of West Coast Haida Gawii. 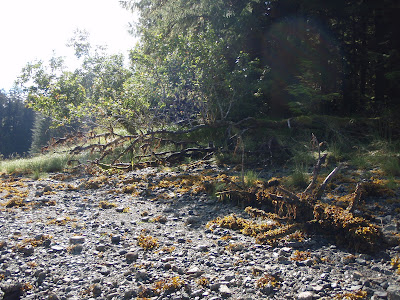 A curious raccoon peers out of the middle of this photo. Can you spot him? 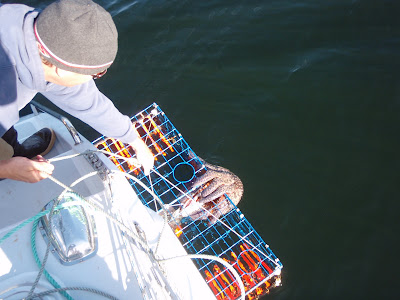 Checking the crab trap in Kaisun Harbor where we temporily anchored to do a bit of beach combing. 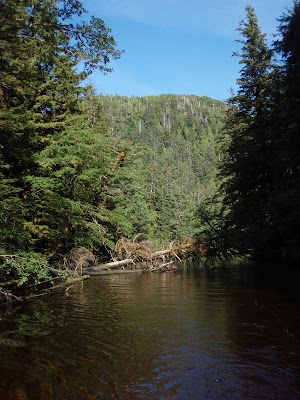 Exploring a creek near Kaisun Harbor at high water. Spotted a few black tail deer, but no fish in the river which we though odd. 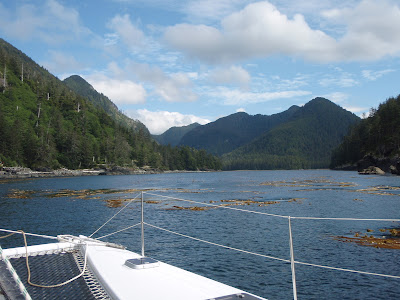 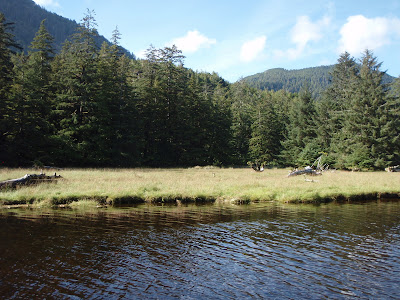 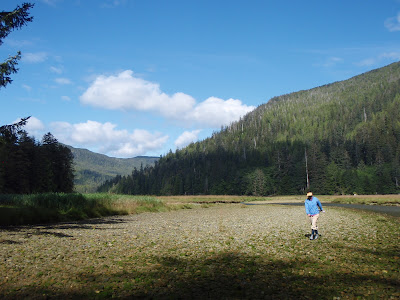 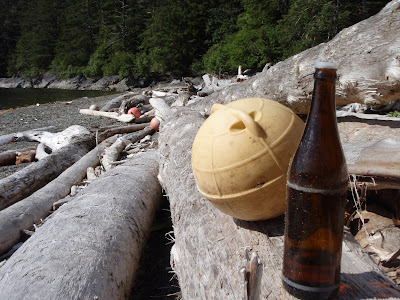 Kaisun Harbor beach combing. A bottle of mostly drunk saki and one of many Japaneese floats that litter the beaches. 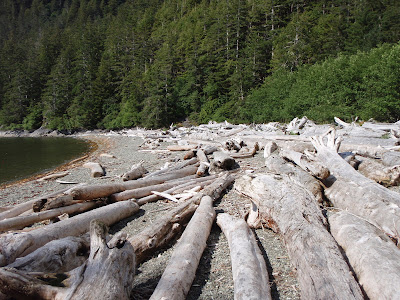 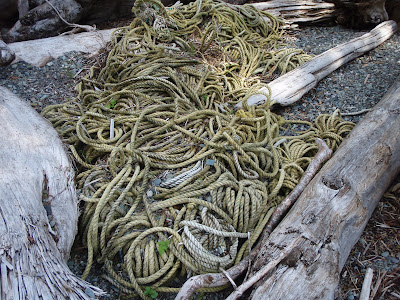 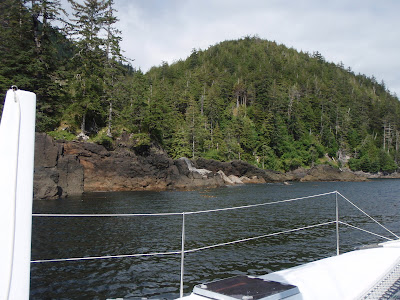 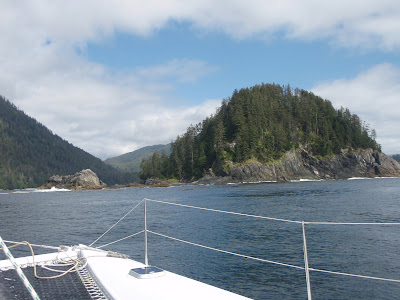 Kaisun Harbor taking the inside route North of the Islets that line the top of Englefield Bay. 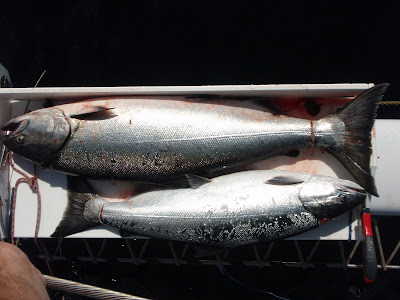 Same fish, different view. The Chinnook was 15 pounds and the coho about 6 pounds. 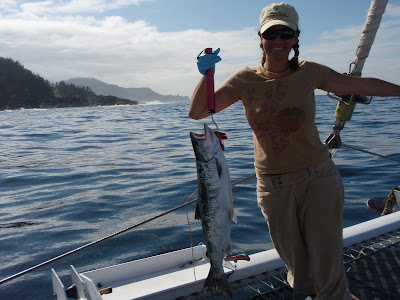 Kathy shows off her catch. 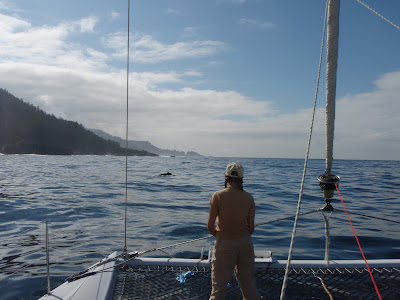 Kathy watching a Humpback whale as he crosses our bow. Do you see the hump? 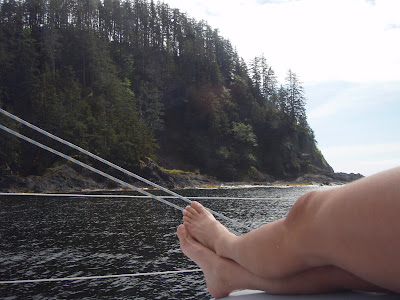 Yes, some days do warrant shorts... even on the West Coast of Haida Gawii.

Pulled anchor and started rigging poles for some fishing. Trolled through a bunch of boats and saw a few fish caught, but no real action worth battling with the other boats. We headed out around Tcenakun Point leaving everyone else to battle it out and trolled South under mostly clear skies. Before long the fishing started to pick up and we landed a few nice Coho Salmon, then a pink, then a Coho then, a beautiful Chinook. Well under our daily bag limit we needed to call it quits as the fridge was full. I can only imagine the productivity of having a downrigger and the big brute like 'Springs' (Chinook Salmon) we could haul from the deep if we could get the hooks down to the normal fishing depth of 80-120 feet. With my deep six set up I think I'm lucky to get down 40'. Breaking our normal First In First Out FIFO system we enjoyed a nice fillet of Chinook for lunch. Sure would be nice to have a huge freezer to lay in some fish, but I'll have to eat myself out of this mess of fish before Kathy will ok another fishing venture. Spotted a few humpback whales, one of which crossed our bow at close quarters.

Dave's 40th birthday. Kathy decorated the boat with streamers and balloons and made a great breakfast of blueberry pancakes, sausage patties, eggs over easy and even a side of raspberries. Not long after we topped of the huge breakfast with a yellow cake with white icing. Later in the morning as we deliberated the weather forecast and our proposed plans, Norman and Lori of s/v Falcor a 35' Victory sailing catamaran hailing from Haida Gwaii swung by the boat to say hi and swap cruising plans. Perhaps we'll see them on our journey South along the West side of Vancouver Island. Having spent three nights in the same place we were getting a serious itch to get off the dock and gave the lines a heave-ho as we headed out for the West side of Haida Gwaii. Transit of Skidegate Narrows is best accomplished at the tail end tide and much easier a journey than one would have thought after reading the cruising guide. Skidegate narrows is well-marked with navigational aids the only caveat being that when heading West Red is on the right. This is odd as most often the old limerick "red right returning (to major ports)" holds true. Keep the reds on starboard as you head West and all is good. On this particular day the high tide in Queen Charlotte City was 6.3 meters while the high tide at West Skidegate Narrows was only 3.6 meters. So once you get to Eastern entrance to the narrows it's a down hill ride. West setting currents gradually increased from nil to nearly 3 knots, a nice boost to speed over ground. Along the way we spotted many black-tailed deer and two black bears. Once through the East Narrows things open up for a bit then neck down tightly as the channel hooks sharply to the South as you transit the West narrows. Just a few miles past the narrows excellent anchorage can be found in Armentieres Channel

Inspired by our new commercial crab fishermen we set out in the dingy to set our crab trap. Later we headed to town for a cheese burger then took LightSpeed out to pull the trap and swing by the fuel dock to top up the tanks. The fuel dock is just to the West of the Public Floats and is both busy and tight for bigger boats. We needed to make a landing on our port side and back the boat into the dock just feet from the nose of a very expensive looking seaplane. Later we ventured out for yet another cheese burger and beers at the Howler pub. This is the only pub in town.

Sunday we braved the loneliest most decrepit Laundromat located a few long blocks east from the Public Floats, past the Liquor Store (closed on Sunday), past the grocery store (open from 1-4 Sundays) to this tiny mostly out-of-order laundromat. No surprise to find the door locked as maybe it was Sunday? Heading back to the boat a guy came out of the Grocery store and offered to let us in the Laundromat as he said 'he likes to keep it locked while he's doing his laundry, or he tends to see his clothes around town on someone else's body'! After getting advice on which of the four top load machines worked best we decided to stick around while our laundry went through the cycles, lest we find something missing. Washed, dried and folded we headed back to the boat with our laundry in tow, yes we do look strange walking down the street pulling a roller bag more commonly found in airports, but hey it does the job and is easy on the back. If it breaks, you can pick up a new to you model at the local Salvation Army for around ten bucks. diddled around the docks for the remainder of the day then hung out with the crews of two commercial crab boats based out of Prince Rupert. The commercial boats were sitting out some nasty weather in Hecate Strait. The mostly ethnic Vietnamese Canadian crew were super friendly and eager to entertain us and shared their Vietnamese style crab. We hung out for a few hours on the back deck of the crab boat and learned much about crabbing, immigration to Canada and Vietnam. A good time and great cultural experience with fine people.

A required administrative stop to attend a mandatory one hour orientation prior to obtaining a permit to enter the 'Park'. Now take a deep breath if you want to read the name of the 'Park' aloud, here it goes "Gwaii Haanas National Park Reserve, National Marine Conservation Area Reserve, and Haida Heritage Site". Orientation is only available Monday-Friday at 9AM. So, we were a day early for orientation which was fine as we wanted to check out the Haida Heritage Center at KAAY LLNAGAAY. We took a walk around town our first evening in Queen Charlotte City, peeked in the one and only pub which was empty and then retired to the boat to enjoy a salmon dinner.