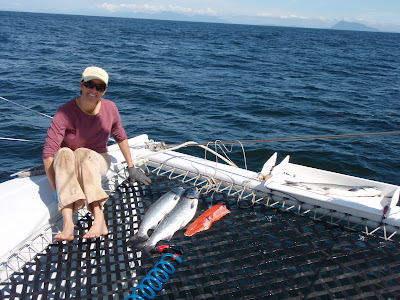 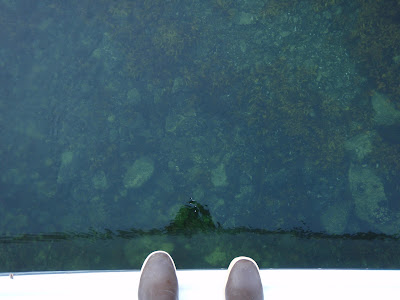 Salmon swim under the boat in Gardner Bay Prince of Whales Island (POW). 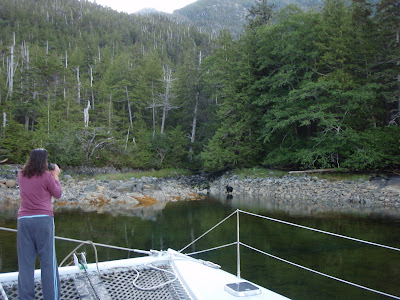 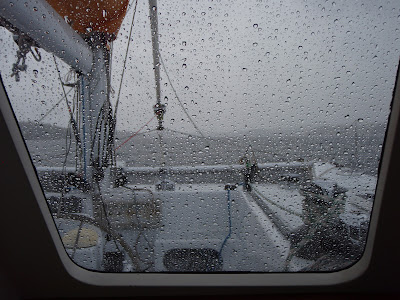 An ugly day as we beat in to Southerly winds on our way to Prince Rupert. 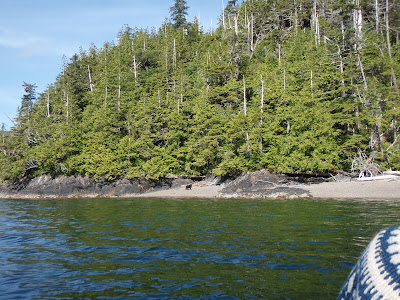 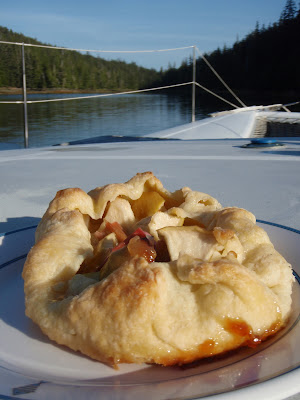 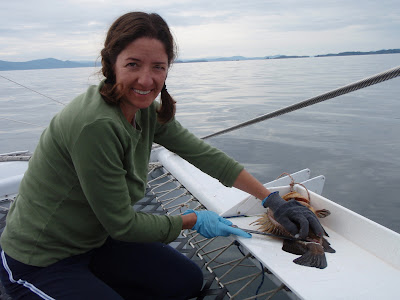 Nice Rockfish goes under the knife. 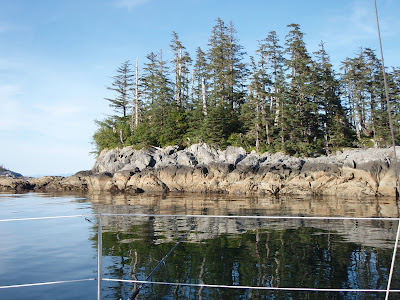 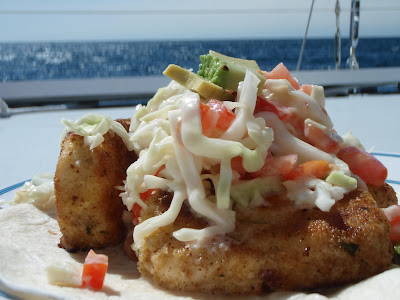 Just cleared Canadian Customs at Prince Rupert. Preparing for our journey early next week to Gwaii Haanas National Park Reserve and Haida Heritage Site on the islands formerly know as the Queen Charlottes.

Setting out with the intent to head to Prince Rupert we began the journey by skirting the treacherous waters of Dixon entrance as we moved easterly across Clarence Strait heading for Revillagigedo Channel thence south into Chatham Sound. We enjoyed lots of whale watching to the point that seeing whales became routine throughout the day. It wasn't long before I was ready to go fishing on a likely shoal in the middle of Clarence Strait still in Alaskan waters. Within minutes of getting the Deep six divers rigged with Fish flash flashers and smaller whole herring in clips deployed a reel began to sing with the sound of the line running off. We landed a beautiful Silver salmon then another then a Pink which was released then two more Silvers, a double hook up! We were in the fish to be sure. What a blast. By the time we were done fishing, filleting, cleaning and getting cleaned up we'd fallen behind on our schedule to Prince Rupert. We considered our options and decided to call the Canadian Coast Guard on the VHF to see if we could obtain permission to anchor at Dundas Island overnight. Although, the Coast Guard was super responsive and friendly they could not grant us that sort of permission and advised us to call Canadian Customs and even offered a phone patch through the VHF radio. Considering the difficulty of talking to someone via a phone patch to VHF radio we decided to continue on until we could get a cell signal. It might be hard for some of you to imagine not having a cell signal for several days, but that sort of defines our off the beaten path travels. Ok, so it's exactly 4:29PM when we finally get enough bars to get the call through and guess what no answer in Prince Rupert. Trying several more numbers for Canadian Customs we finally get connected to a friendly agent based in Victoria. Our simple request to anchor for the night before clearing into customs takes on a distinct bureaucratic nature when the person you are talking to has no local knowledge of the geography, weather, tides or distances a sail boat can travel. Traveling parallel to the international border we were just asking for permission to dip a little South and anchor at the nearest island. Should our request be denied we could have diverted to the nearest US island to the North. Our friendly Canadian Customs Agent wanted to know why we couldn't make it to Rupert and I said we could, but wouldn't be in until the wee hours of the morning and would prefer to get a little sleep instead of sailing all night. Checking with a supervisor we got the 'OK' to anchor out. Despite going through the entire line of questioning about what we have on board, passport numbers, dates of birth, etc... we still need to complete the process at the dock in Rupert. No complaints, it's just funny as while we were on the South end of Prince of Whales Island several Canadian fishing boats called the US coast Guard and obtained permission to anchor for the night in US waters. I would have expected Canada to be more lax, but at the end of the day I have no complaints since I did get a good night sleep.


August 9, 2011
Nichols Bay on the South end of Prince of Whales Island to Gardner Bay, Alaska.

Bright blue sunny skies and little wind for the second day in a row seems almost too good to be true. After coffee and breakfast of fresh fruit and granola we set out to further explore the estuary and creek. The tide was on the rise as we landed on the rocky shore, where upon finding lots of signs of bears we started in on some funny songs as Kathy rang her bear bell to let any bears know we'd be intruding for a bit. Poked around the small falls concealed by the overhanging cedar trees Kathy spotted some overlooked salmon roe scraps from a recently eaten fish. I made a few casts, but only succeeded in snagging rocks and trees on the opposite bank. With a stubborn thrifty attitude I repeatedly went to great length to free my hooks, repeatedly crossing the stream and at one point leaving my snagged hooks and fishing rod until the tide had risen to the point I could take the dingy in and free my gear. Out in the main bay we explored more of the nooks and crannies. Cruising near a nice beach we spotted some bear prints in the sand and then a black bear who checked us out then slowly continued on his way down the beach. Cool! The first black bear we've seen as all the others were brown grizzlies. A little beach combing revealed lots of commercial fishing gear such as floats, nets of various mesh size and innumerable quantities of rope of all description. I even found a salmon trollers fishing plug which was still serviceable and I'll be sure to try it out. Kathy got water in one of her boots and was ready to head home to change socks so back at the boat we raised LightSpeeds' anchor to go check the prawn trap set the previous evening. It seemed a good spot in 240 feet of water, but all that pulling only yielded three prawns! Curious to what might be around the next corner we headed out of the bay without a plan, stopped to do a little whale watching and fishing on our way toward Cape Chacon. At the Cape were several whales and hundreds of various sea birds noisily clamoring to feeding in the churning waters. Inspired by the birds I set out some lines, but again found no takers. More interesting was a school of several pound Grey Cod? that were engaged in a vigorous feeding frenzy. Cod pierced the surface going skyward with mouths agape then with a flip of the tail pierced the sea head first with timed precision. Now imagine this happening hundreds of times per minute. A cool show that we caught partially on video.

Meandering along the coast we still had yet to decide where we were headed for the day. Several bays a few miles to the North were worthy candidates, but with exquisite weather conditions we opted for a jaunt into Stone Rock Bay, if not for the super benign conditions would be inhospitable. Anchoring in the NW bight we made a foray to shore to explore yet another creek and do a little beach combing. Beach combing wise we hit the mother lode of flotsam. Foreign floats such as the large round orange 'Japanese Floats' lie about in pairs, crab floats, net floats, seine floats and even a metal ball float. Made me think we could start a boutique micro-business selling unique floats for decoration. With the benign weather we could have plunked the anchor down for the night, but the unquenchable pull to know what's around the next headland moved us further up the coast to Gardner Bay. Within the bay we headed toward the jumping fish anchoring in the SW corner near the stream. Gardner Bay is know for warm waters at the peak of summer so Kathy was keen to do a 'Nature Bath', it was a bit of a competition as I cast for fish swimming around the boat as Kathy washed her hair in the 61 degree 'warm' water. The brightly striped Chum salmon were not in the mood for dinner, but seemed unpreturbed by Kathy's splashing. It wasn't before we spotted a lone bear at the waters edge lusting after the frolicking salmon just out of reach in the deeper waters.

August 8, 2011
Arriving in Nichols Bay under sunny skies we set our prawn trap in the deep spot near the narrows at the middle of the bay. Making our way another two miles to the head of the inlet on a rising tide we nosed LightSpeed into the shallows towards the junction of the tannic tea colored creek where it gurgled into the bay. Salmon leapt and splashed with vigor as they prepared for their final journey up stream to complete the circle of life. I too contemplated aging as my overfished right elbow burned with tendonitis from reel induced repetitive use injury. I guess hauling shrimp and crab traps from the deep by hand and endless hours of casting for salmon is catching up with me on the eve of my 40th birthday (August 16th). Just another three weeks or so and we'll be on the tail end of summer in Northern waters and out of the land of plentiful fishing heading South. Perhaps then I can rest my aching elbow.

We explored the estuary in the fading light of a perfect high latitude summers day as I cast my lure towards leaping fish for the pure pleasure of fishing.