Midnight update: more or less half way to Vancouver Island. Lots of fishing vessels to dodge... keeps one alert in the wee hours of a overnight passage. Tuna boats and longliners? working the continental shelf.

After a fitful nights sleep we sailed over to Hotspring Island. Closing on Hotspring Island I have to say I was disappointed to see at least six buildings on the tiny island. Here we are at the edge of the earth and now in a National Park and we find six buildings at the 'natural' hotsprings? I almost tacked away for want of more pristine settings. But, we were there so we hailed the Haida Watchmen on VHF channel six to ask permission to land on the island. They said to call back when we were there to ensure that there was space for us! To the credit of the Park Service they limit visitor to a maximum of 12 at a time. What this translated to was a very short visit for us once ashore as we were informed we could stay 1 hour then needed to go to make room for a boat load of tourists arriving via high speed skiff. Really? So much for edge of the earth we were now mired in commercial tourism replete with schedules and dual layers of bureaucracy (i.e. Haida Watchmen / Parks Canada).

OK, so this side trip to the hotsprings wasn't the experience we hoped for and no sooner had our dinghy hit the beach two Haida Watchmen greeted us and escorted us across the island. Call me independent, but I would have preferred to walk across the island alone instead of being marched along and being set immediately to a time table. At the springs we found three nice pools and exactly ten other guests for an exact total of twelve persons. We did meet some nice sea kayakers 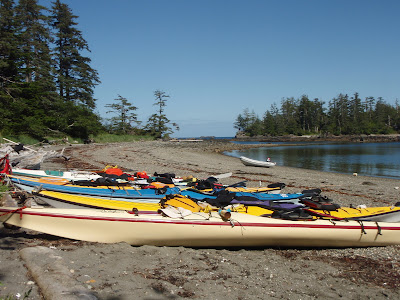 who were on a 16 day paddle and whom were also getting the boot to accommodate the new guests. These guys really needed the warm up and therapeutic benefits of the springs after all that paddling. But, tough luck we all had to go to make room for those whom did nothing to earn their visit other than present a VISA card to a travel agent. 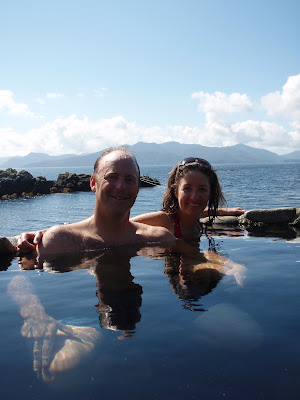 A short time into our soak the Haida Watchman dropped by to remind us we were on the clock and had 30 minutes remaining. Oh, thanks for reminding us that we just sailed several thousand miles to get to one of the gems in the Pacific Northwest and now we need to get moving because a bunch of 'tourists' arriving by high speed skiff or seaplane. Ohh great! Thanks for reminding us of the commercial tourism operation you have going here. Ok, the rant is over. 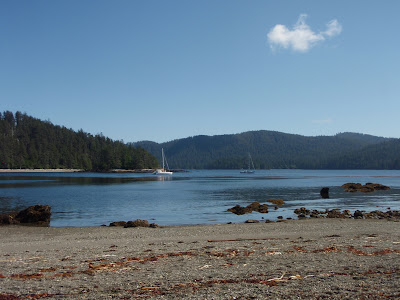 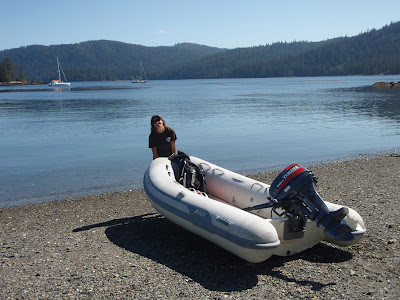 So off we went back to the boat and pulled anchor and sailed South and through Burnaby Narrows on about a 8' tide which was cutting it close. The narrows dries at low water and the channel is a convoluted narrow and requires the boat operator to perform a zig zag from shore to shore passing very close to dangerous rocks and shoal waters. We went a little long on one of the zigs and found ourselves with about 2' of water under the boat. Burnaby Narrows is renowned for it's abundance of marine life and Kathy as bow watch was getting a first class show as passes colorful sea stars a little too closely for comfort. Making it though the narrows we continued South another 12 nautical miles to Ikeda Cove to anchor for the night. 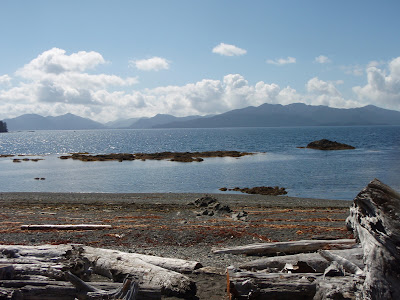 August 24, 2011
Rising around 6AM we got underway to pull our prawn trap to discover a small octopus had taken up residence. Needless to say there were no prawns to be found in the Octopuses new lair. 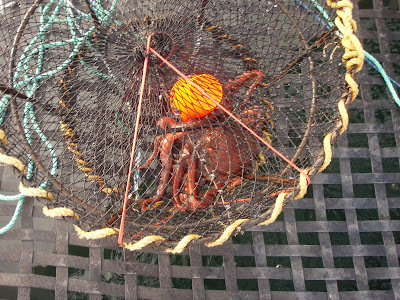 I opened the trap and tipped it on edge and the Octopus slithered out onto the trampoline under his own motive power via the many suction cupped covered tentacle arms. We took a few photos and briefly discussed if we should eat the unlucky fellow. Deciding we really had no clue how to dispatch nor prepare the beast we proceeded to hasten his departure back to the deep. The industrious fellow already had a few arms through the trampoline mesh and despite our best efforts to pull him back up and throw him overboard he was just too slippery. The tentacles and suction cups were very cool and very powerful, immediately sucking onto a hand and fingers, but as soon as you gripped and tried to pull the suction cups would release and arms would retract leaving only a handful of slime. Much to our amazement the Octopus was able to squeeze through the square mesh opening which was just a bit larger than the end of a stick of butter. Given his head was the size of a volley ball this was a remarkable feat. Once in the water he let out a big squirt of ink leaving a big brownish cloud under the boat. Luckily he didn't give us a squirt while he was on deck. Kathy had on her last pair of clean pants and would have been greatly dismayed should they have been squirted with inky slime.

Sailing along the coastline towards Cape St. James under brilliant blue skies we did a little fishing, but since we are headed to the North Coast of Vancouver Island about 180 nautical miles distant we can't linger too long. Stopping on a bank in about 80 meters of water I tried for a halibut, but quickly had a huge Rockfish on the line. Dinner in hand we made the left turn towards Vancouver Island and a likely landfall in Winter Harbour. Spotted plenty of whales today as is usual and also a good size pod of dolphins and a sealion haulout. The more interesting creature besides the Octopus is the large number of albatross we find now that we are well out to sea beyond Cape St James. The amazing thing is that these same birds nest in New Zealand and make the annual trip to Haida Gwaii. Simply amazing! The birds must have no natural predators as they skim closely by the boat time and time again affording a wonderful opportunity to enjoy their majestic splendor.

The high pressure system has reestablished after the last nasty low passed and now we enjoy mostly clear skies and light winds out of the Northwest. It's been a day of mixed sailing sometimes going good to 8 knots and sometimes slowing to 4 knots as the wind evaporates and a combination of motor sailing when the wind totally disappears. 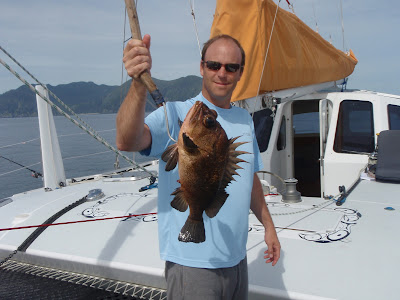 Enjoyed a nice sunset over a dinner of fresh rock fish. Downloaded an updated weather forecast for Queen Charlotte Sound and North Vancouver Island and things look good for our overnight voyage. It's nice to be underway and we are enjoying full fledged use of our sea legs. Mostly, we can do any task or read at leisure with no nasty lingering symptoms of seasickness. When we mention we get seasick most folks are a bit shocked. How could we sail so prolifically and 'gasp' feel seas sick. Well the trick is to stick with it. Almost every one is going to feel sea sick until they get acclimated to the motion of the sea then having gained their 'sea legs' they feel fine. We are the same. Too much time in the calm waters of a protected port and we loose our acclimation, then once back on the sea we might feel ill, have a headache and be a little grouchy for the first half a day. For me I just need a nap and then I'm good to go. The only trigger after that is if I have to go into a hot engine room when the seas are rough to work on the fuel system. The smell of hot diesel fumes in a confined space and vigorous motion from the sea will have me sweating and ready to vomit. Once out of the engine room I'll lie down for a few minutes closing my eyes and then I'm fine. Kathy sometimes needs a bit more time to acclimate, but she's tough and rarely influenced by 'mal de mar affect' for more than half a day.