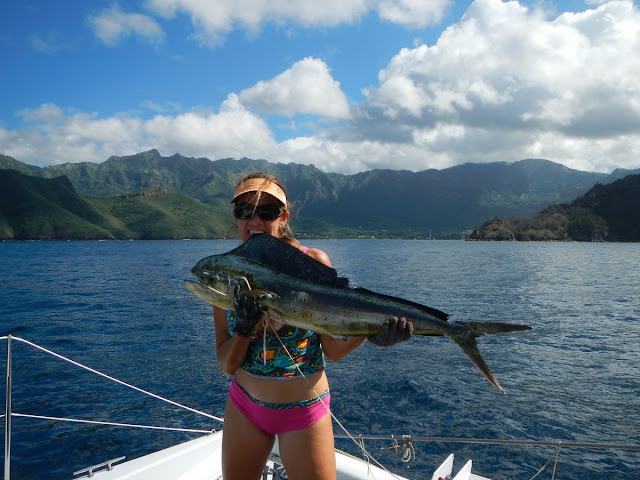 Kathy shows off one of three Mahi Mahi we caught on this day.  On our way out of Bahie Taiohae we rounded the rocky outcrop of Sentinelle de l'Est very closely and we were quickly rewarded with a nice Mahi Mahi on the line. Taiohae is located on the central South coast of Nuka Hiva and our goal for the day was Baie d'Anaho on the North side of Nuka Hiva necessitating a beat around the east end of the island into brisk ESE trade winds. For the initial easterly leg we decided to motor directly into the wind as it's much easier to fish under power than sail. In short order we had a second Mahi Mahi aboard then a double hook up with a third Mahi Mahi and a Bonita tuna. With our small refrigerator stuffed full of fish, we pulled in the lines and unfurled our sails. 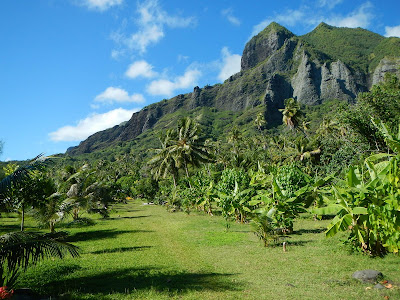 A walk at Anaho Bay. 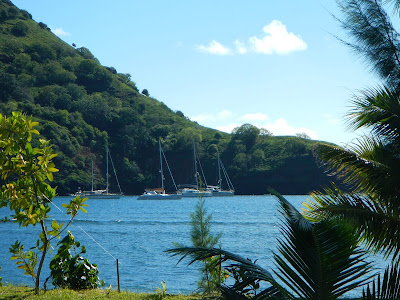 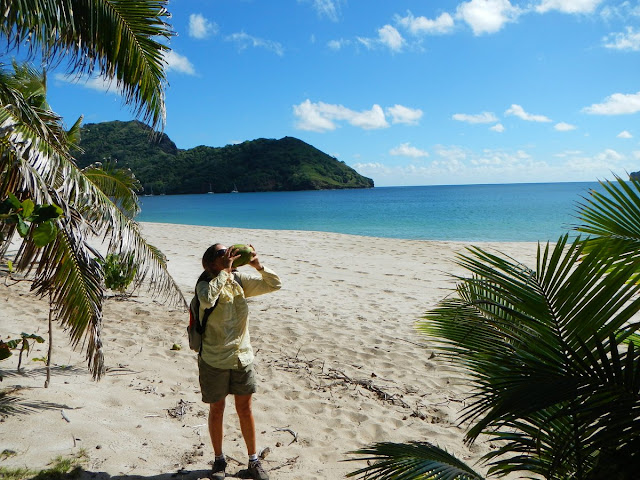 Stopping for a refreshing coconut water from a young green coconut. 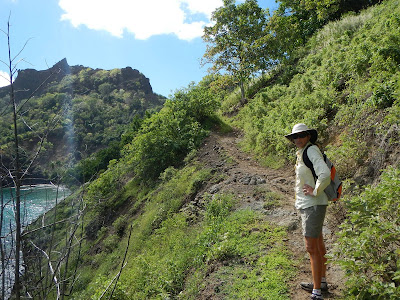 On the trail to Haatuatua 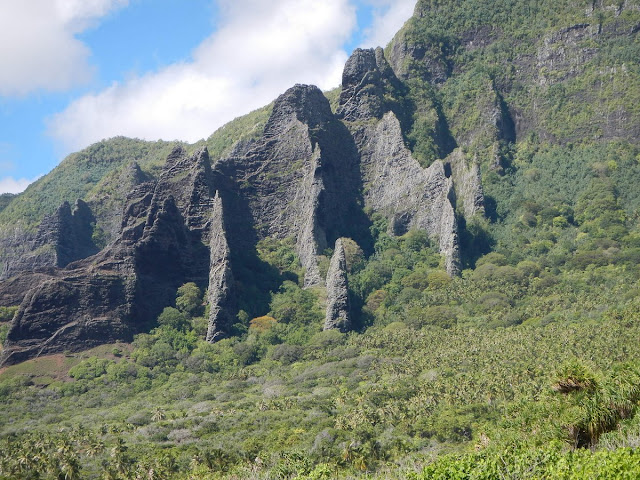 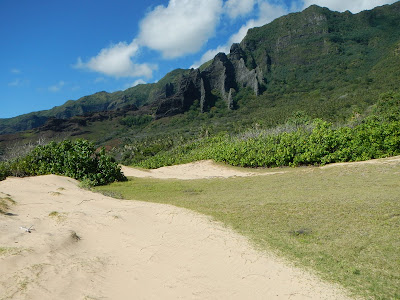 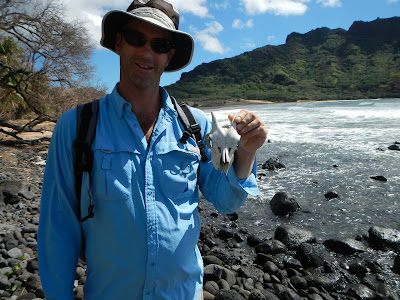 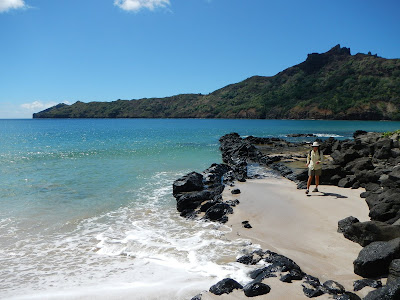 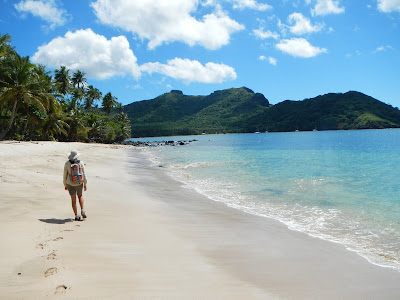 Taking a short cut along the beach in Anaho 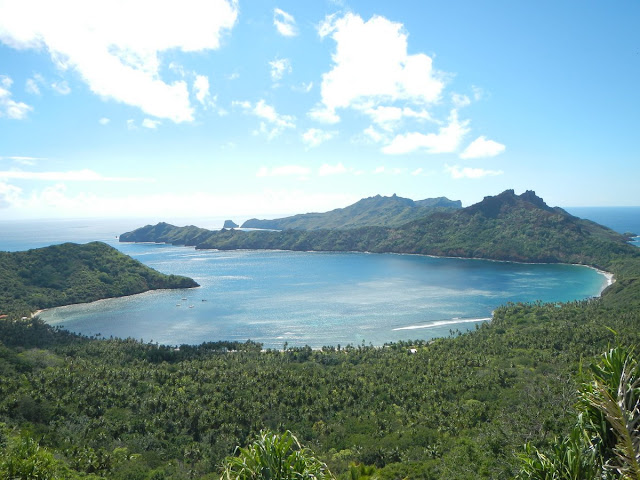 Anaho Bay from the 200 meter ridge looking NE.  Anchorage is bight on the left.


Arriving in Baie D' Anaho in the early afternoon we decided to mount an overland exploratory expedition to one of the oldest archeological sites in the Marquesas, the remote Bahia d' Haatuatua. To save some time in the dwindling afternoon hours, we ran our dinghy to the SE corner of Baie d' Anaho, landed on the beach, then made a scramble through the bush until we intersected a trail. Once on the trail we made quickly for the saddle, then dropped in to the verdant valley above Bahia d' Haatuatua and headed for the sand dunes. The dunes are quite remarkable as they are nearly flat on top and clad with a short cropping of golf course like grass. Beyond, powerful crashing surf and brisk trade winds continue to slowly sculpt the jagged spined cliffs that encircle the bay.

The silky white sand stretched for over a mile making for a beachcombers delight. Unfortunately, we found even one of the remotest beaches on the planet, nearly 3000 miles from land, still marked by the ubiquitous calling card of modern man... empty plastic water bottles.

With daylight hours ticking quickly away we headed for an eroding edge of the sand dunes where ancient history was slowly being exposed. With time short we vowed to return to Bahia d' Haatuatua another day to search for more archeological sites.

The next day we made an early start and headed to shore via the conventional route, through the pass in the coral reef on the West side of Baie d' Anaho. With one of our dinghy wheels flat we anchored our dinghy in thigh deep water off the beautiful white sand beach. On my last visit to Anaho we had an exceptional experience of making quick friends with the locals and even going on an all day goat hunt. I was keen to track down my old friends, but inquires revealed no one I knew was around. Our French is poor, but we understand several of the guys were off to Tahiti for a big arts festival. 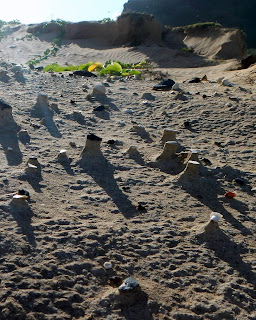 Heading down the beach front path we again made our way toward Bahia d' Haatuatua where we spent the day combing the entire beach and discovering one very cool archeological site where the wind was slowly whipping the sand away revealing ancient history. Despite the bugs bites, and incredible itching we suffer as a result, we found some ancient stone tools. One razor sharp knife like blade we borrowed to slice open our pompelmouse. The blade was so sharp that Kathy accidentally cut a finger. Not wanting to tempt fate I left some very cool stone blades I discovered right where I found them.

After a full day of adventuring we headed back to the boat for lunch and a well earned nap. The steady breeze and calm waters in Anaho make this one of our favorite stops in the Marquesas. After our nap we spent a few hours scrubbing the bottom of the boat and the waterline that had been quickly accumulating growth in the murky shark infested bays on the South side of the island. The presence of sharks doesn't bother us much, it's the murky waters that invite trouble. In the last month there had been two shark attacks on Nuka Hiva, so we patiently waited for the relatively clear waters of Anaho to swim and clean up the boat.

Today we're giving our feet a break, and instead mounting a substantial snorkeling expedition that will take us to the sentinel outcrop of rock we passed upon entering Baie d' Anaho a few days ago. Point Motuarahi bathed in clear oceanic waters should provide a chance to search for some lobsters.