Ingrid Stewart is doing great things as the principal of the Vaitau primary school here in Aitutaki.   As you might recall Ingrid's husband Greg recently sailed with us to Rarotonga, it's Ingrid and Greg that have really helped up make a connection here in the Cook Islands.

Arriving back in Aitutaki we invited Ingrid over for dinner since Greg is now off sailing on a boat named s/v TabbyCat which is currently underway for New Zealand.  But, mostly we wanted to catch up with Ingrid and share some of the wahoo we recently caught.  Over dinner Ingrid regaled us with stories of living in the Cook islands and taking over the role of Principal at Vaitau, one of the three primary schools here on Aitutaki.  Due to drought conditions and some sketchy plumbing Ingrid had to close the school on several occasions as they had no water to flush toilets. After describing the problems I offered to take a look.  So today Kathy and I headed up to Vaitau school to work on a few projects.

My first project of the day was to head up a team of future mechanics to tune up some bikes that had been donated from overseas, along with the flash new sunnies.  I brought the tools and in short order the boys were at it tightening handlebars and making all sorts of adjustments.  Nice work guys. 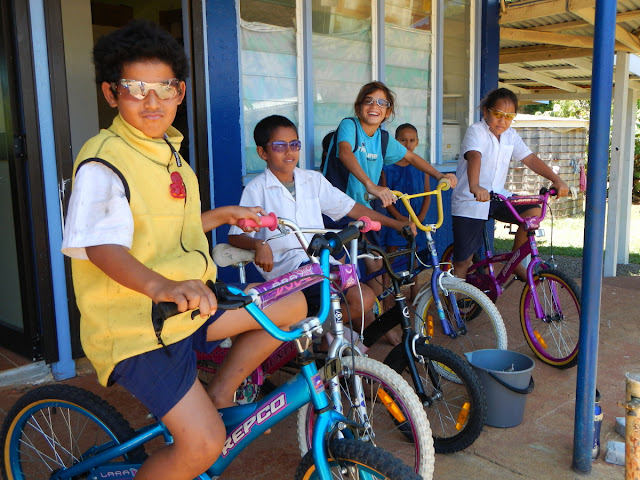 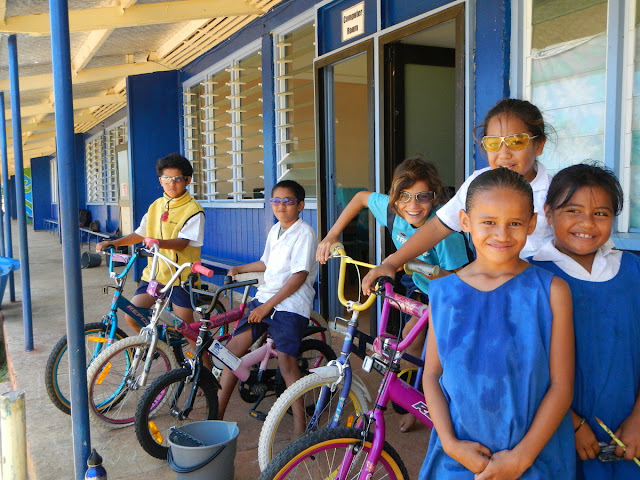 Next on Ingrids list was to assemble some new dry erase boards.  For this I enlisted some of the 'Mechanics' and before long we had plenty of hands on the job. 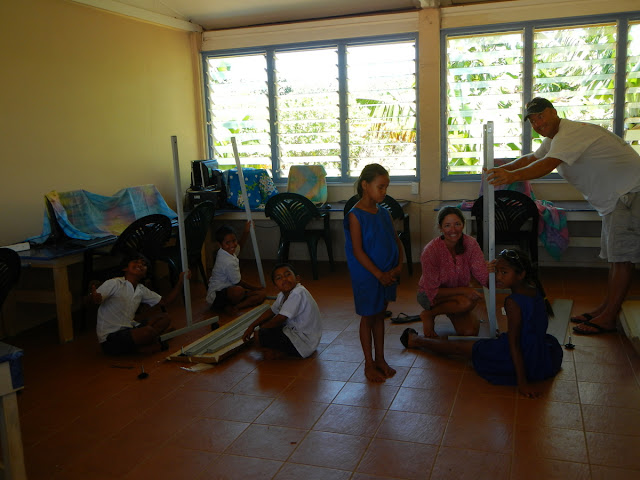 Next the kids jumped on computers and we pulled up our blog. 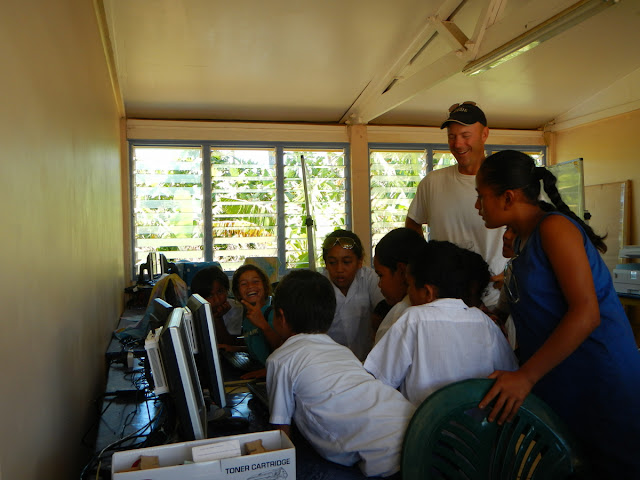 Then Ingrid and I got down to the dirty work of sorting out the plumbing for the toilet block.  Water supply on the island is unpredictable and the pressure is always low.  Most homes have a large header tank that fills as water is available and then by either gravity or pump is supplied to it's intended use.  The toilet block had a header tank, but it was in poor repair with a broken float switch and the pressure was so low it wasn't getting filled very often.  The good news is that a new pressure pump had just been installed to drive water from rain water collection tank through sediment filters and then made safe for drinking with a UV treatment.  So, looking at the system we decided to tap the toilet blocks plumbing into the new pressue system and then run the island water supply to the rain water tank which was twenty times bigger than the exisiting header tank.  The beauty of the modification was it only required one 'T' fitting and just a few minutes to retrofit.  The bigger battle was hunting down tools from Greg's work shop then finding the local plumber to buy a fitting.  In the end it worked great. 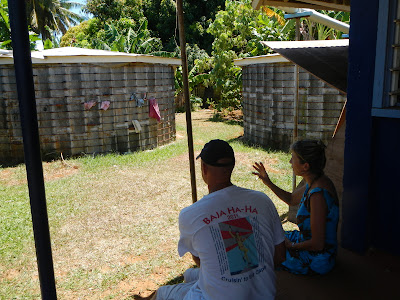 Dave and Ingrid discuss the merits of several possible water soulutions.  The large tanks in the back ground are rain water catchment. 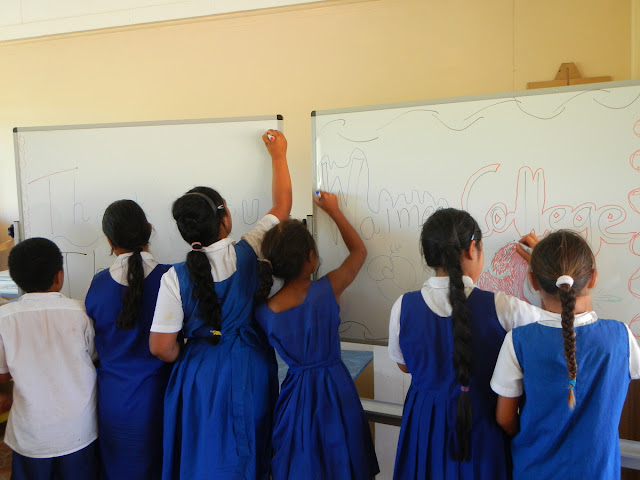 A special message from the class on the new dry erase boards. 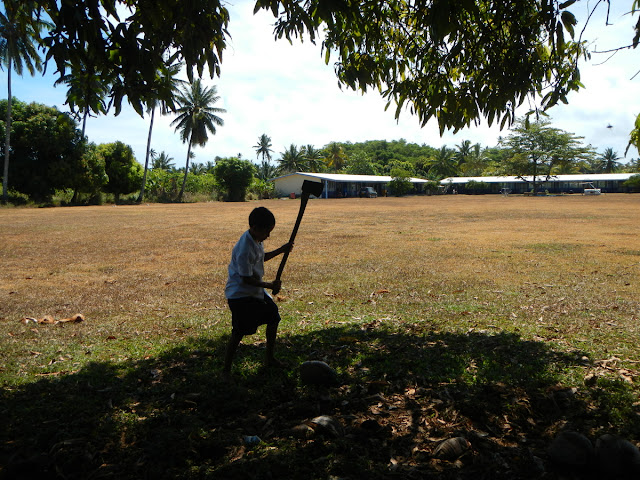 After school Kathy got a tour of the schools' fruit and vegetable garden with Driver; the young man from Puka Puka, who showed how to chop a coconut to feed the schools two prize pigs. 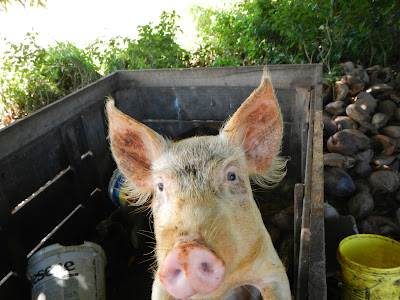 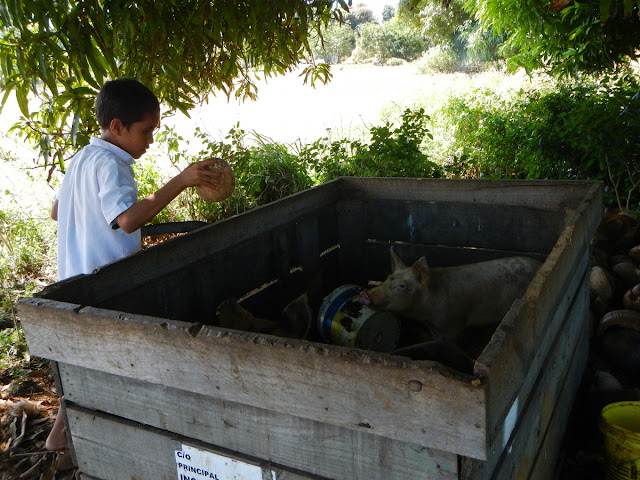 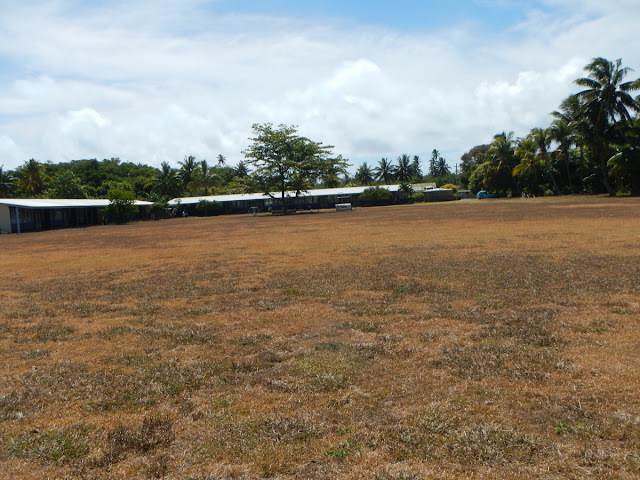 Due to this significant dry spell the grass is looking pretty parched for a tropical island. 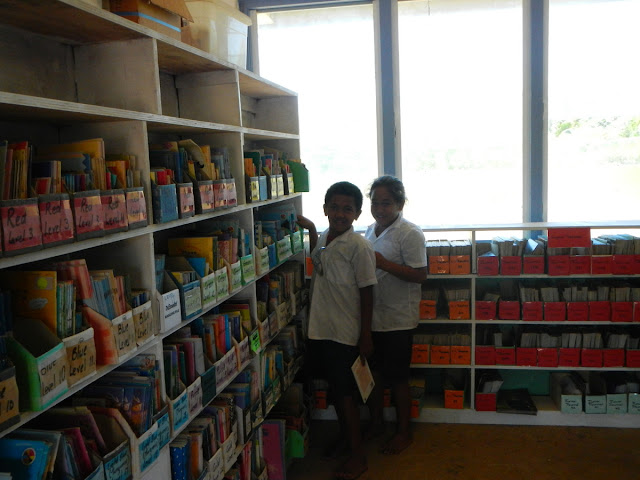 Kathy gets a tour of the resource room as the boys pick out some books for Kathy's hour of reading tutoring.