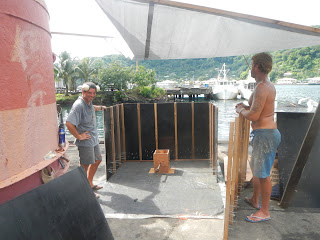 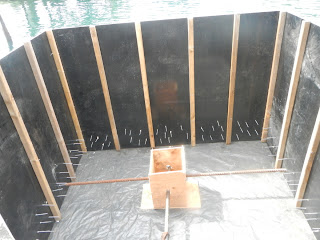 The actual concrete mooring will be 4'x6'x14" thick.  The plywood box in the middle creates a space to shackle a chain to a 3/4' piece of rebar and a 1" stainless steel propeller shaft. 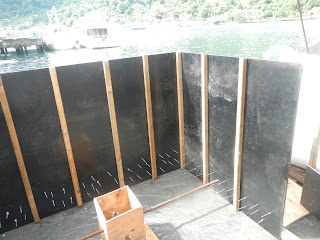 3-1/2" nails driven through the walls of the 1/2" plywood forms will embed in the concrete to secure the forms to the concrete while the form act as the side of a boat with concrete bottom.  The idea is the flotation of the formwork will support the concrete until the mooring is positioned and scuttled. 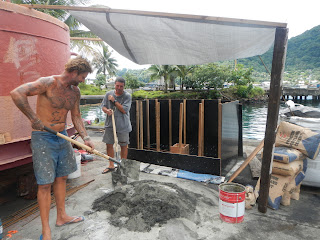 Mixing a cubic yard of concrete requires lots of hard work, especially in these hot humid conditions   Shane and Fred were instrumental to getting all the concrete mixed in one day.  It took the three of us about 7 hours total to construct the forms, cut rebar and mix the concrete. 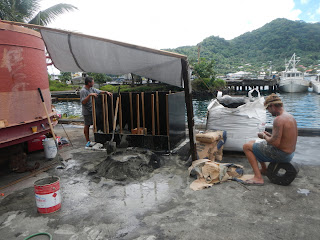 Taking a break while the water soaks into the 'volcano' of sand and cement.   We aimed for a ratio  84 pound bag of  TypeII cement to 32-36 shovels of sand to around 6 gallons of water.   Mixing this much concrete by hand is rough.  We'd have preferred to use gravel as well as it make the final result stronger, but the sand was free and should yield a healthy 3000psi which is more than enough for this project.

Some of the concrete placed in the forms with a few pieces of 1/2" rebar in place.  Lots more rebar was added to yield a one foot on center layout with a minimum cover of 3"

1" stainless steel propeller shaft  will take the load and wear while a second piece of 3/4" rebar is there to share the strain.  10"x10" block out provides access to the attachment point from the top or bottom side of the slab as a hedge against the worst case scenario that the mooring lands upside down. 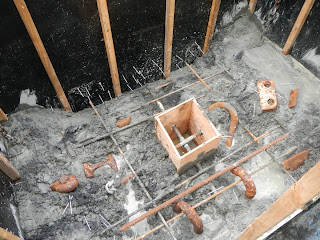 Lots of bits of random steel were added to the mix to increase the deadweight.

Only one more bag of cement to mix as we pose for a picture before lunch. 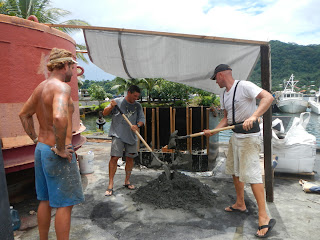