Cyclone Evan update.. We're not out of the woods yet.

Cyclone Evan seems to have slowed and now seems to be tracking away from American Samoa.  We're not out of the woods yet, but this is VERY good news.  Last night we were really worried, as Category 3 cyclone Evan was predicted to pass within 8 miles.

Yesterday afternoon, when the NOAA forecast mentioned 100+ knots of wind...

Five boats elected to drop their moorings and move to the wharf.
Six boats all ill prepared for the blow were abandon by their owners.
Five well prepared boats with dedicated crews decided to ride it out.

The biggest fear among the 'storm riders' was the abandon boats.  As these boats showed numerous signs of   owner neglect and utter lack of storm preparation. I have no problem with folks running for shore, but they have a responsibility to prepare their boats before they leave, so their boats don't endanger the lives and property of others.

Since we had our boat squared away, I offered several days in a row to provide free help in striking and securing roller furler head sails, canvas, blue tarps and cluttered decks. But, still these individuals refused help and failed to make any preparations.  Case history shows that a boat must be stripped of all gear and mooring pennants must be doubled up or the boat will most likely break free becoming a lethal weapon in 100+ knot winds. Moorings also need to be correctly sized and inspected regularly.  These imprudent mariners choice of inaction was inexcusable. 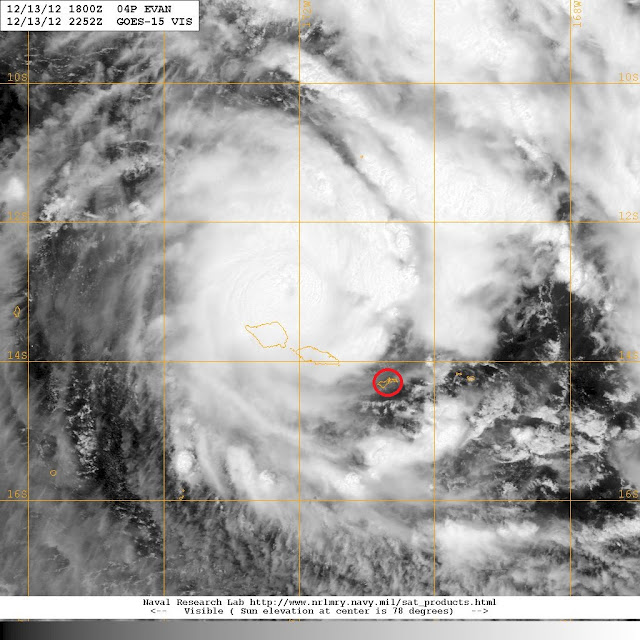 American Samoa is indicated by the red circle.  Luckily, the storm center appears to be moving away from our anchorage in Pago Pago Harbor, American Samoa.
Image Source: http://www.nrlmry.navy.mil/tc_pages/tc_home.html

Fiji Met show Evan as a Category 3 and building to Category 4 with the next land fall in Fiji.  Our thoughts are with our cruising friends in Fiji as they prepare for the storm.
Source: http://www.met.gov.fj/