I'll keep this report brief as I've been feeling way too seasick to sit at the computer so far this voyage.

We really enjoyed out visit to Penrhyn atoll over the last two weeks, but more on that later.

We're currently blasting along at 8 knots, about 65nm East of Penrhyn atoll and aiming for landfall somewhere in the Tuamotu archipelago of French Polynesia some 650nm distant. The wind and seas are out of the NE, so we're 'sailing to weather' or at least the apparent wind is around 60 degrees on Port as we hump and bump along blasting into, over and through the 3 meter short period wind waves.

Not my idea of fun. Kathy has been racked out for the last 6 hours and even our cat Shell is struggling with the boat motion despite having 4 legs on which to try to stand.

A tropical depression to the South of us is blocking the SE trade winds and as wind rushes into the depression it's creating a huge area of Northerly winds on it's North side. We're using these North component winds to move East. We've been studying the weather and decided today was the day to head out, especially if we wanted to stay East of a huge band of the South Pacific Convergence that looked particularly nasty with lots of perception, heavy squalls and strong winds. 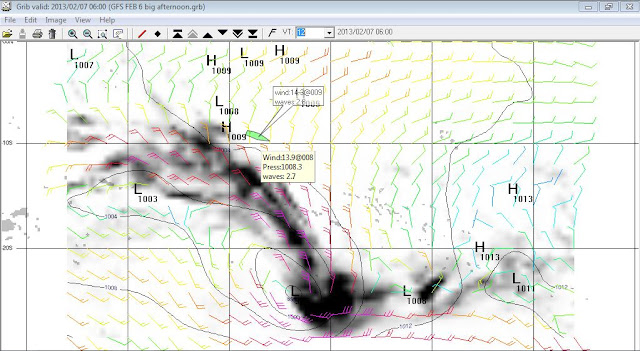