Sailing strategy for Tuamotu to Marquises

We got underway from Fakarava around 1pm yesterday, the SE trades had gone light so we motored out Passe Garuae and set a easterly course. Motoring on one engine at 2500 RPM we've been making between 4-6 knots of headway depending on sea state and the strength of the headwinds which have been up to 16 knots out of the SE. At present we have 1 knot of wind and the voyage plan is to make as much easting as possible before the trade winds fill back in and head us to the north. So far so good, we are now 195nm from our anchorage at Fakarava and we're hoping to snag another 100nm before starting the 300nm tack to the north with a planned landfall at Nuku Hiva.

Around 5PM yesterday Kathy and I were snacking on our last jar of wild Alaska caught smoked salmon mixed with cream cheese and served up on some Ritz crackers. Yeah, it's a rough life out here on the high seas :) In all actuality, opening our last jar of our coveted smoked salmon (that we caught and canned in Alaska in 2010) shows just how thin we are getting on food due to all the poor fishing results. Just after the last bite of cracker, we hooked up with a nice fish. We went through the drill to get the boat stopped, but within minutes lost the fish to yet another gear failure. For those keeping score this would be the fourth fish in a row that we've lost to broken fishing gear. Simply unbelievable! The tough part about all these loses is we were starting to get hungry as we rely on fish as our primary source for the dinner table. 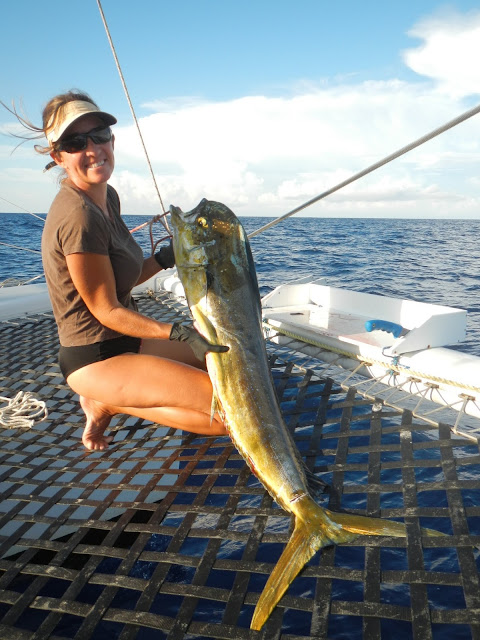 Redoubling our efforts Kathy pulled out a second fishing rod and I got busy cobbling together two more fishing lures. Within 10 minutes we were trailing two lines and it wasn't long before both reels started to sing the "fish on song". A double hook up! We stopped the boat and battled cris-crossed lines as 2 nice Mahi Mahi tail walked and jumped behind the boat. We joined efforts to land the first beautiful 50" Mahi and then despite or best effort to loose the second fish he remained patiently on the unattended fishing line until we could bring him alongside to be released. We get something like 10 big meals out a of a 50" Mahi, so better to release the second fish to swim another day. We'll hope to catch a fresh one just before we arrive in the Marquesas.

A pretty low key trip so far aside from the lightning rich squalls that we've been carefully tracking visually and on radar and avoiding. The forecast promises strong winds for the last few days inbound to the Marquises.