Friday Snorkeling, lunch in the bush and a school fund raising grog session at Tovu village.

Risi guided us on an amazing snorkelling trip to a spectacular section of shallow water reef inside the lagoon near the SE corner of Totoya. All five of us piled into the dinghy, so it was a slow ride the three miles to the reef, but better for going slow as we could ply Risi with questions about Fiji and life on Totoya island. Once we neared the snorkel spot we headed toward a sandy beach where Risi's mother Vuli was camping out harvesting and boiling pandanus leaves for weaving mats and husking coconuts for Copra. Vuli was on her third day of camping out at the remote beach with another of the village women. Vuli's son and Risi's brother who lives in Suva is getting married, so Vuli is busy weaving 20 mats as wedding gifts to her son. 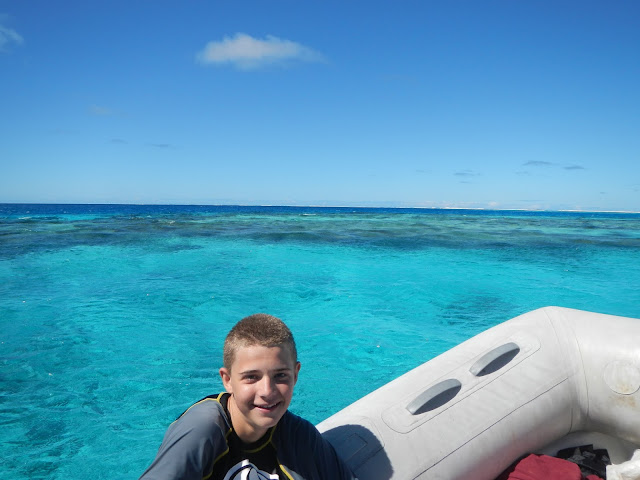 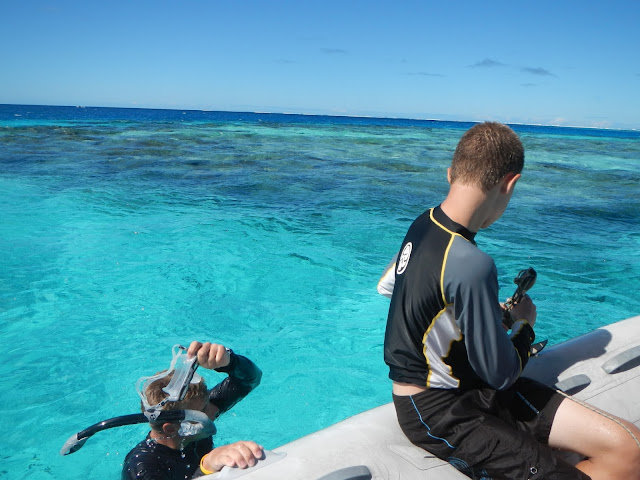 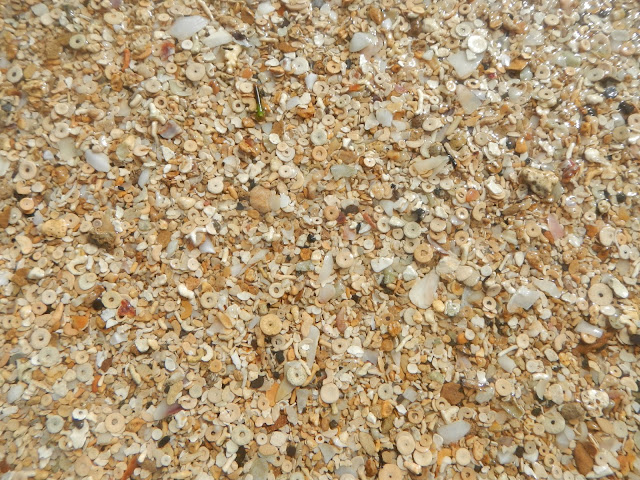 Cool shells on this beach are round with holes in the middle. 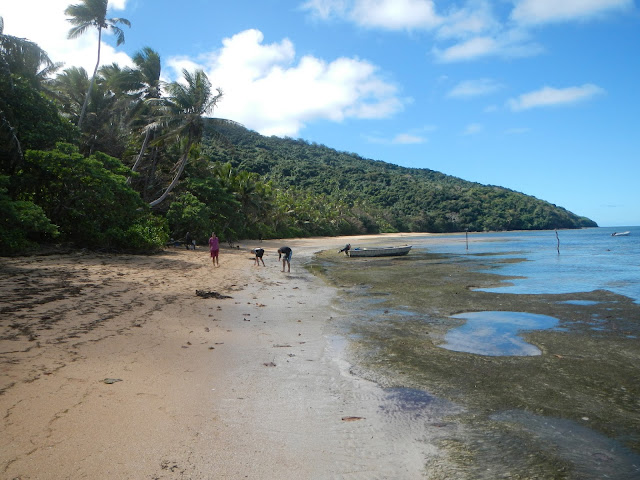 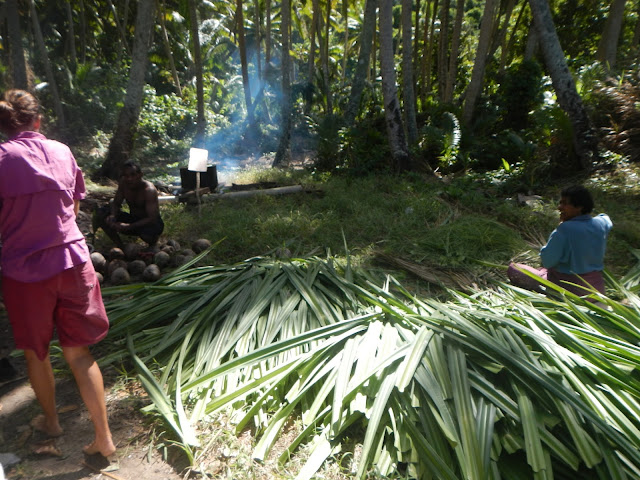 Pandanus leaves being prepared for boiling by cutting off the sharp barbs. 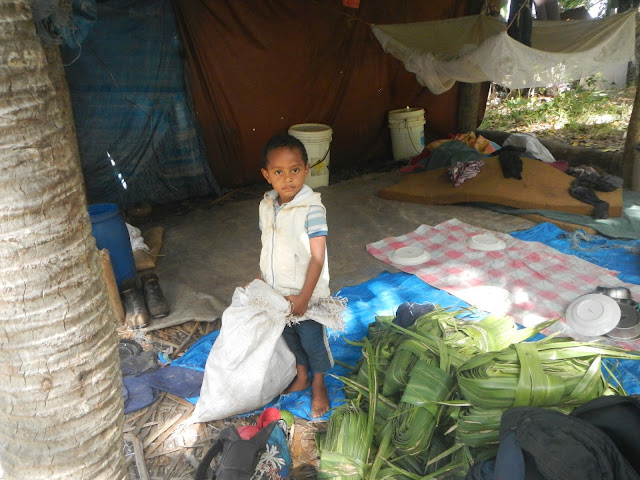 Cute little girl standing next to bundles of pandanum leaves that are ready to be boiled. 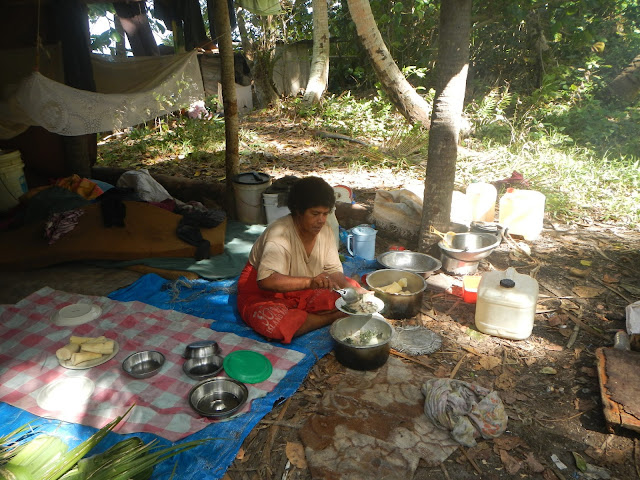 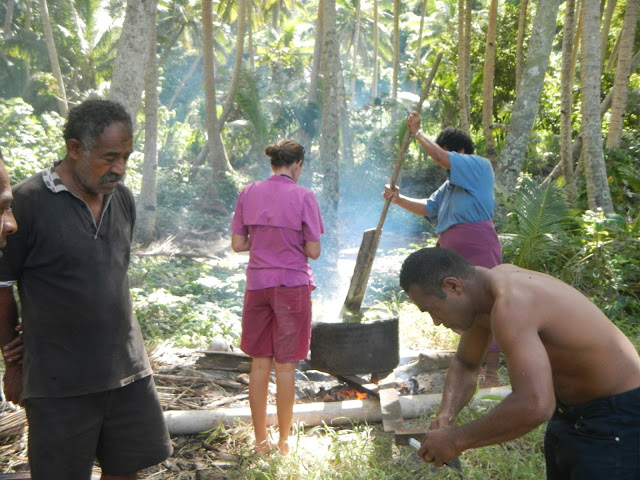 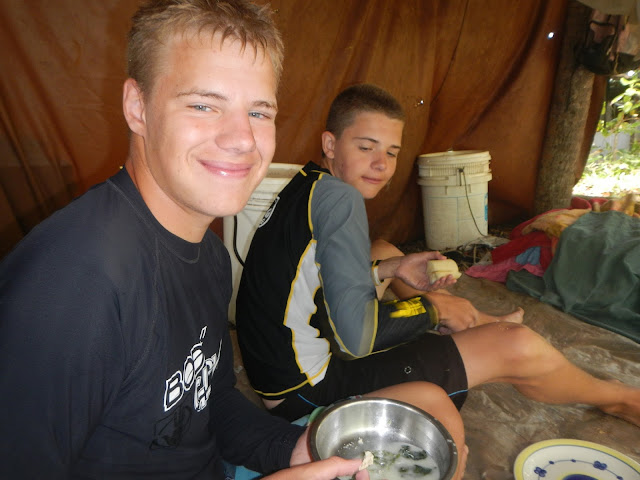 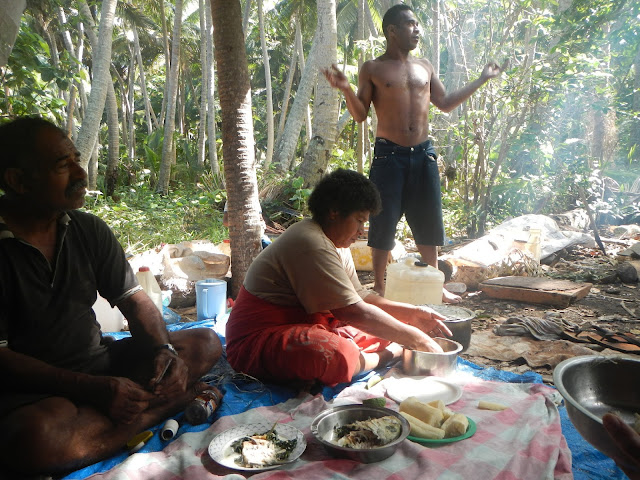 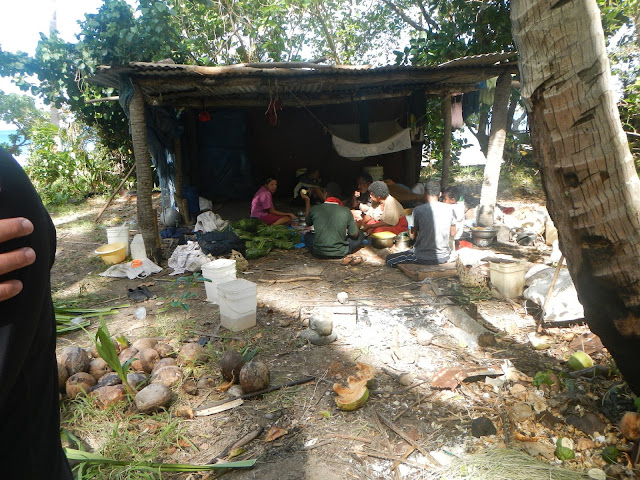 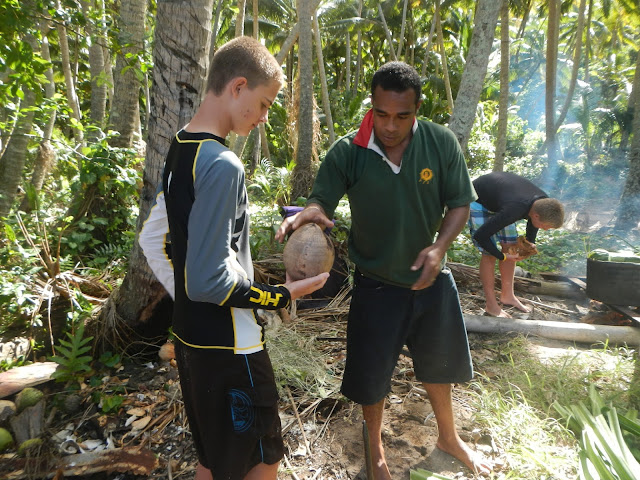 Tim getting coached on how to husk a coconut 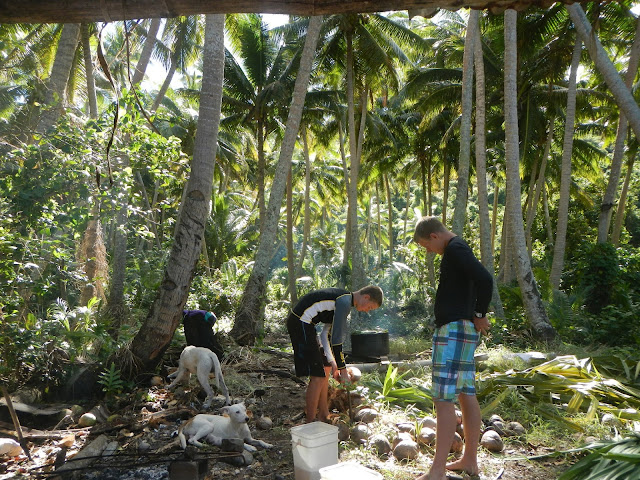 
Bruce learns to husk a coconut

On a scale of one to ten the coral was an 8.5 to 9 with huge table top corals, stag horn corals, green branch corals with amazingly long limbs, bright orange soft corals, soft spongy green lettuce leaf corals. Fish wise it was a 3 as Risi was busy spear-fishing while we ogled at the coral gardens and any fish within sight darted to safety. Perhaps, in other locations around the island one might find more fish life that wasn't running for its life. Recently, three marine reserves were established as no take zones and perhaps in the future these will not only provide breading grounds for fish and invertebrates, but provide some spectacular snorkeling to future visitors.

Heading back to the village we joined an evening fund raising event for the local school. A kava bowl 30 inches in diameter was placed in the center of the large community building with the elders sitting on one side and the fund raising supporters seated on a huge mat on the other. Near the door four or five younger men prepared the kava from Yaqona root by pounding it with a 1-1/4" bronze rod 30" long into a hollowed out log crucible. The crushed roots were then placed in a cloth bag and kneaded into a bucket of water until a latte colored fluid was produced. At certain intervals the pastor of the village would call for more kava and 3 gallons at a time were poured into the tanoa bowl where one mixer agitated the kava with a large coconut shell and filled the cups of half coconut shells to two servers who then passed the brimming cups of kava from hand to hand to each and everyone in the room. As an honored guest I received the kava shortly after the Vaka or #2 chief. After drinking the kava in one pull I clapped my hands three times to signify my liking of the kava. Maybe 40 people were in attendance at any given time and usually each 3 gallon batch of kava provided 2 coconut shells per person. We stayed for three rounds ~6 coconut shells full at which point the slightly medicinal nature of the kava started to take effect. The boys mixing the kava said they might make 15-20 3 gallon buckets before the grog drinking session ended that night! Throughout the evening a sub group played a card game similar to Hearts and four guys played guitar and Ukele and everyone joined in singing. An authentic off the beaten path experience to be sure.