At 8:30 this morning we met Temo and Risi on the beach. Kathy, Bruce and Tim headed for the hill with the local youth to tend to Kava plantations high above the village. I wanted to go for the hike as well, but had agreed to take a look at the school generator which hadn't run in more than a month. Temo and I walked up to the school where we met the headmaster and school administrator who guided us to the generator shack. Inside the tin shack was a 2 year old 17kW genset built by China Yangdong Co., LTD that was already looking worse for wear. The generator wouldn't start or even make a click. Apparently, another yacht that recently visited and determined it was a starter issue and had attempted to start the genset with a fresh battery from their yacht to no avail. 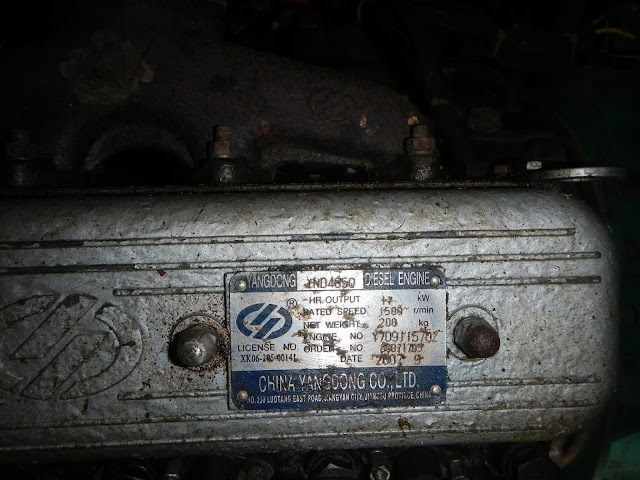 Since being installed several years ago this generator has yet to receive a oil change.  Even the initial 50 hour change was skipped.  Brillaint planning to purchase the generator and install all the wiring infrastrucutre, but fail to budget or consider even the most basic maintenance.   I strongly advised that the engine oil and filter be replaced and stressed that the generator would not last much longer being abused and advised that it not be run until properly serviced.  If you are headed to Totoya be a hero and take 4-6 liters of 30 wt oil, oil filter, final fuel filter and air filter for a Yangdong IND465Q Diesel engine.  See ID plate in photo above to confirm particulars. 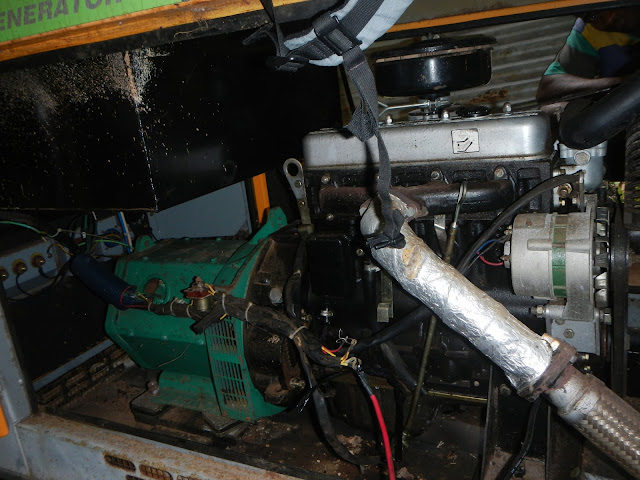 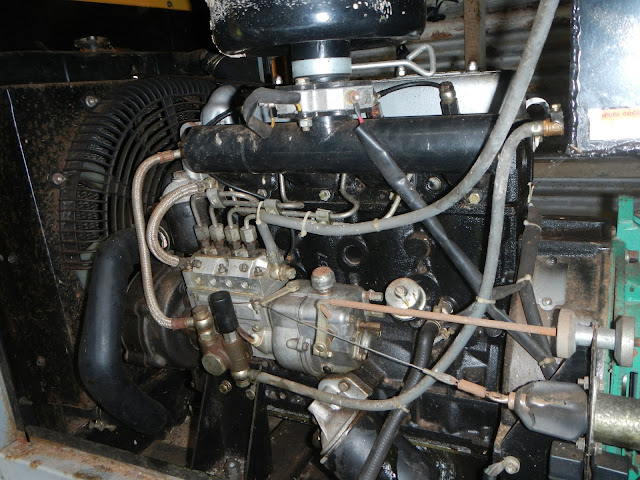 This photo shows the locations of the oil filter (bottom center) and final fuel filter just left of the injection pump piping.   Be a real hero and bring some engine coolant and new hoses as these are already getting crunchy from internal corrosion.

Armed with an electrical multi-meter and a set of tools I removed the starter and disassembled all the parts. We then took the generator battery down to the nursing station where they have a solar panel to charge the battery. Next on the list was a Chinese knock off of a Yamaha 950 watt generator. Before I started to trouble shoot the generator I advised the owner to save himself future trouble and purchase a solar panel. The generator had a component inside that was literally blown and melted so we swapped the part with another non functional unit and it was still not producing more than 40 volts. I again advised that solar panels were the future.

Next was a Yamaha Enduro 40 outboard that had a faulty gear box. I checked out the engine and found the transmission and gears to be working fine. Perhaps, the performance deficit had to do with the severe damage to the three bladed prop which was more like a two and a half bladed propeller. The ignition system was also suspect despite the engine running on either of the two cylinders at low speed. The owner was intending to take the boat 44 miles to the neighboring island of Moala. There is no amount of money that would have put me in a boat powered by this engine for that long journey as it's almost asking to be lost at sea. Tomorrow, we will take the guy who needs to get to Moala aboard LightSpeed and sail him up there.

Later in the afternoon, Kathy and the boys returned with Risi, 9 children and two women in tow who wanted to check out LightSpeed. The kids all had a blast and enjoyed a big bag of cookies we shared. Kathy's gardening adventure to the Kava fields high in the hills ran from 8:30 to 2:30PM, so they were hungry when they returned, but despite the fatigue they had already scheduled volleyball for the remaining hours of light. So, we all headed to shore and the boys instead joined the evening rugby game. After hauling the schools generator battery to LightSpeed to charge, I headed back to the school generator and Kathy headed to take a shower at a village home. The generator repair was a success and I guess the wasps nest that was inside the starter was the cause of the non start issue. Combined with a freshly charged battery it started right up. I then headed to Temo's home where a Kava session was under way and enjoyed a few bowls of Kava.  Everyone in the village could hear the generator running and it was sort of my 15 minutes of fame.   Eventually, Kathy and the boys tracked me down and we all hung out for a while. Temo's wife and Risi's mother Vuli was working on a new custom woven mat for LightSpeed. It's the perfect size for the main salon and tonight she was adding 'LightSpeed' to the mat in high contrast black pandanamus.

Tomorrow, we are sailing Risi and Risi's cousin to Moala 44 miles distant and then the cousin will catch a flight to Suva and Risi will do some shopping for the village and return with us to Totoya after a few days.

Totoya is experiencing a shortage of sugar, flour and rice and we've gifted all of our supplies, so we'll be doing some shopping while at Moala as well.