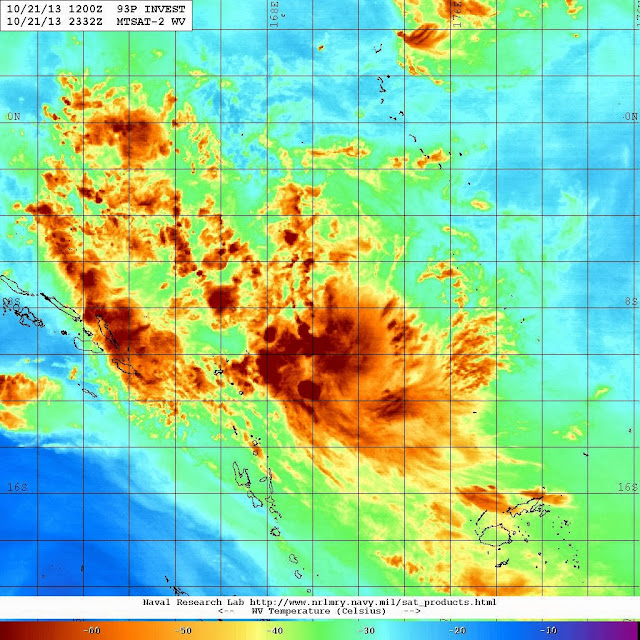 We're waiting on '93P Invest' pictured above to move out of the area or disperse and then we'll get underway for Rotuma, but it could be a week or two before we find the right wind.
Image courtesy of http://www.nrlmry.navy.mil/TC.html 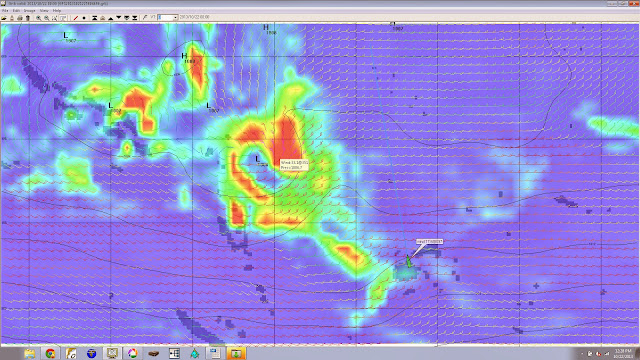 A screen shot shows the GFS GRIB agreeing nicely with the satellite image above, the problem is the various weather models disagree on exactly where this small low pressure might move next.

Our friend Philip sailing Blue Bie, an Outremer 43 catamaran uses European and Canadian GRIB models supplied by Predict Wind.  Philip was confident that the low would move W or S and is left today for Rotuma which lies just to the east of this weather (see blue line and tiny speck of land).  We'd love to be in Rotuma in a few days, but don't like the idea of  even a small chance of running into this weather at sea.  So, we might be here a few more weeks waiting for our window.  We're still near Safari Lodge on Nananu-I-Ra island and will resume kiting lessons as soon as the constant rain abates.

Update:  We spoke with Philip after his successful voyage to Rotuma and now wish we would have gone as well.  The Predict Wind models are pretty sweet, but at $500'ish a year we make do with our tax payer funded GFS model.