Light winds under 15 knots today, so no kiting and we decided to host an Ailuk adventure day aboard LightSpeed. Mark and Laurence of s/v Radiance and Philip and Teri of s/v Blue Bie joined us for 28nm of sailing, a pass snorkel and plenty of fishing and lots of fun.

Ailuk has 4 lagoon passes, 3 on the west side and one on the south west side. Our journey began at the north end of Ailuk atoll as we sailed off the anchor with a full suit of sails flying. We towed Blue Bie's dinghy as back up for our pass snorkels, which was a pain in the general, but nice back up for our high current ebbing tide pass snorkel. We sailed inside the lagoon past the northerly most pass on the west side then out the second most northerly pass to troll some lures along the ocean side reef. Then we sailed in the third pass and anchored in a sandy patch by a huge coral head, just to the north east of the pass. From here we launched dinghy's and explored the huge coral head, before being pulled with the ebb tide out of the lagoon. Lots of nice big reef fish and plenty of colorful giant clams amongst the healthy reef. We drifted along the north wall of the reef pass of which the coral was healthy, but no spectacular fans or anything too colorful compared to Fiji. The highlight was the fish, lots of fish and all big and mature. Only a few sharks, mostly small grey reefs and a few skittish bigger grey sharks that bailed out of the pass into shallow water on top of the reef. 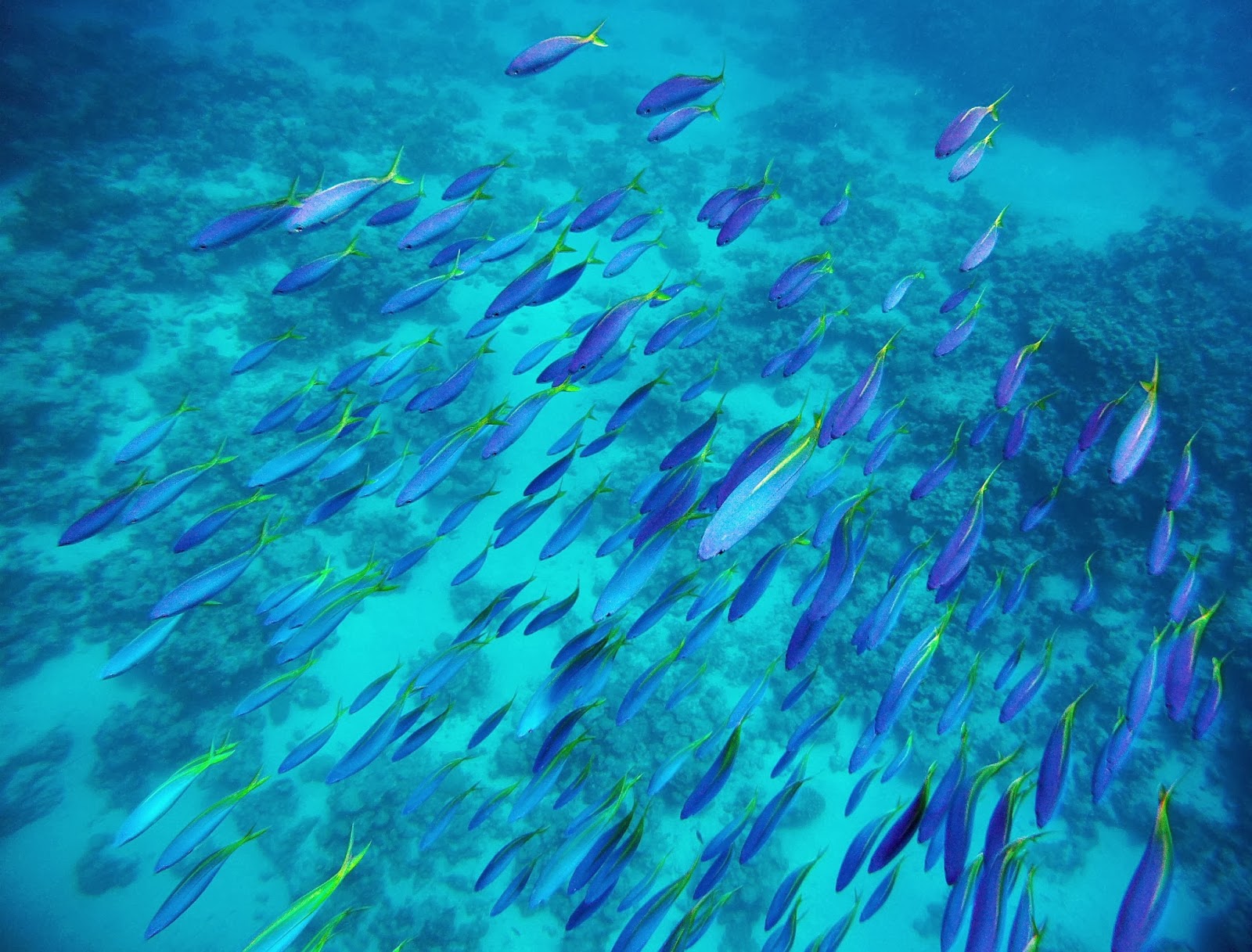 After a long drift snorkel we ended up on the ocean side of the reef and then crossed to the south side of the pass. WOW! Lots of fish on the southerly most ocean portion of the reef pass. Schools of Trevali, Baracuda, Big Eye tuna, and lots of other unidentified schools of fish, plus turtles and a few more sharks. Overall a 8 on the 1-10 scale.

Back at LightSpeed we raised anchor and made our way out the pass toward the island on the south west corner of Ailuk for some fishing. This is the spot where we landed the 52 pound Yellow fin tuna about a week ago. Running low on fish we put out the lines and and within minutes had a large Barracuda on the line. When the barracuda was reeled close to the boat we saw lots of splashing as we saw a pack of sharks ate all but the head. In all we had 5 sharks swirling under the boat waiting to fight over the Barracuda head we would soon unhook from our line.

Next, it was another Barracuda that was a short distance release. Then a nice big eye tuna that we managed to land followed by a few more unidentified lost fish, one of which was certainly eaten by a shark based on the chomped main line well upstream from the 5' stainless leader. Then a double hook up and landing of Rainbow Runners. With a few fish onboard we reeled in and started the 14nm sail for home. Within 20 minutes we had Rainbow Runners and Mahi jumping ahead of the boat, so out went the lines again, but it was another 10 minutes before the reel started to sing as a Wahoo stripped out line.

Mark played the fish well and we landed the 25 pound Wahoo efficiently and it was back to cleaning fish after we had just cleaned up the galley. Can't complain about a nice Wahoo and a nice fast sail back to the north end of Aiulk. Despite good winds the drag of Blue Bie's 10.5' dingy full of dive gear and a 15hp engine prevented boat speed much above 8 knots. We divided up the fish and sent a huge bag into the locals whom live in front of our anchorage. Then after everyone headed home it was time to clean up all the fish blood.