Ailuk island on Ailik Atoll has a population of around 300 and the primary school is comprised of 80 students grades K-8. Like most of it's neighbors in the South Pacific the Marshall islands are experiencing a population boom and droves of children are everywhere. Mid-term education week was wrapping up here on Ailuk and Friday night we were invited to a banquet dinner and theatrical and singing performances. We arrived at 6PM and for our second time in two days were greeted with beautiful flower leis for the boys and fragrant frangipani tiaras for the girls. Preparations were underway on the school basketball court with a MC testing out a static laden PA system and a few school desks were beginning to fill in with food. According to a large placard on each light post the People Republic of China (Taiwan) had donated the lights that cast an icy blue light on the court. A large sea turtle was being butchered on one corner of the court and a young boy was charged with shooing away flies from the pile of freshly cut meat and bright green turtle fat. 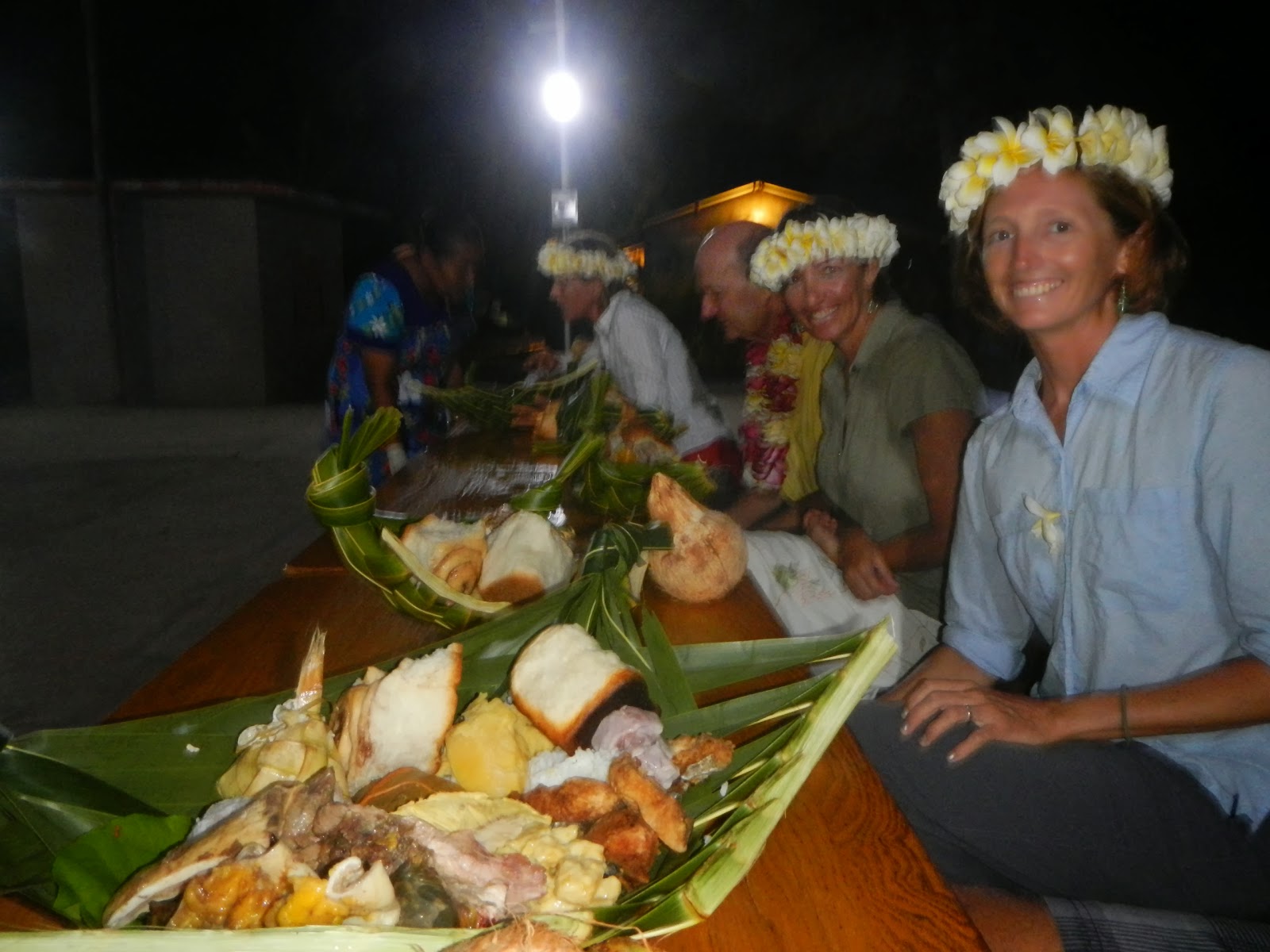 Laurance and Kathy at the Ailuk school feast. 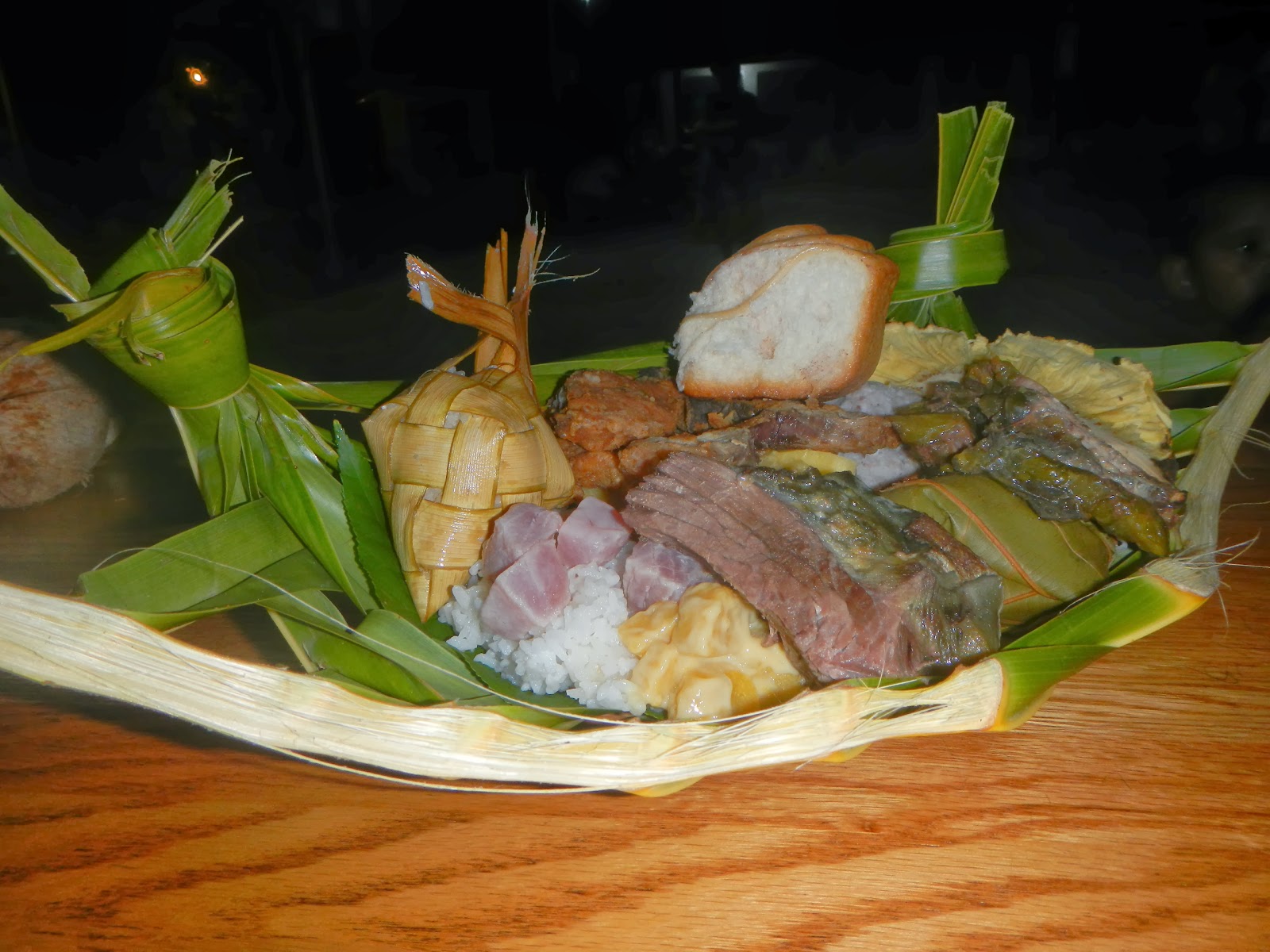 So here's a question: Does a school feast of endangered sea turtle underscore a clear educational opportunity? Or is this feast an example of perfect blend of tradition and sustainability? I'm not judging but, the remoteness, size of a population, and the use of traditional sailing canoes suggest a place in balance. A notable absence of outboard engines, consumer goods and a disposable mentality contribute to this view.

For several hours the food continued to pile up, the crowd grew as did our anticipation. The head table was set on the basketball free-throw line, an irony I would contemplate as I considered the dilemma before me. Around 9PM we took our places at the head table, the only table on the basketball court, besides the food table at the other end of the court, we sat alone under the glare of the Taiwanese lights. Soon, woven palm frond serving platters heaped with fried fish, breadfruit, pumpkin, several types of rice, bwiro (mashed up, cooked, liquefied, then solidified breadfruit wrapped in a leaf) and sea turtle were placed before us, the honored guests. Each platter could feed a hungry family of four, yet we each had our own. I dove into the fried fish with a flourish and scooped up pumpkin and breadfruit with my fingers making a good show to the hundreds of on lookers. Two huge turtle steaks stared up from my plate, imparting a feeling of ill ease. I tasted everything else on my plate twice under close observation of the crowd who had not yet been served their food. Then I took a tentative bite of the chewy sea turtle, a bit like an over cooked lean steak with an initial flavor of steamer clams blended with beef. Next came a server with a heaping bowl of boiled turtle eggs which are very similar in appearance to that of an individual chicken egg yolk. At this point I'd crossed the philosophical line and quickly popped the egg in my mouth and was surprised with the creamy smooth consistency and delicious flavor. My social duty completed and after confering with Ready, the acting mayor, I passed my still heaping palm frond platter to a group of hungry eyed children who devoured every bit with flourish and abandon.

Did I squander an opportunity to lead by example and abstain from eating turtle? If I spoke Marshallese perhaps I would have pursued a more righteous path and shared a perspective on moderation. Or was I wise to embrace the warm friendship and traditional fare of this isolated community?

After eating we enjoyed a lovely 2 hours of singing, a play, conversation, and the constant entertainment of at least 20 under 5 year old kids rough housing on the basketball court.


It was Valentines day evening and Kathy and I were planning to celebrate our wedding anniversary with a bottle of Champagne, but by the time we finally got back to the boat at 11PM we decided to save it for another special day soon.

Snorkeling on the outside of the reef just south of Ailuk island is possible at high tide, but securing the dinghy against potentially breaking waves is tricky. We hand set our anchor on a dead coral ledge and explored a grotto filled with 40+ large bump head parrot fish, wrasse and even a curious shark (Location near: 10 12.87 N 169 58.61 E). On the way back to the boat we snorkeled on an isolated coral head in the lagoon with thousands of small fish and healthy corals (Location near: 10 13.45 N 169 58.51 E).


The next day we made the 14nm sail up the lagoon to anchor in the most delightful spot behind Enijabro Island. From here we took our dinghy south to Enejelar Island for some kiting (launching beach near 10 26.4 N 169 57.6 E). Philip helped Kathy with some coaching and I felt I made good progress switching from my 12m kite to a 10m kite and doing a pretty good job of edging and staying upwind despite a current over the reef. 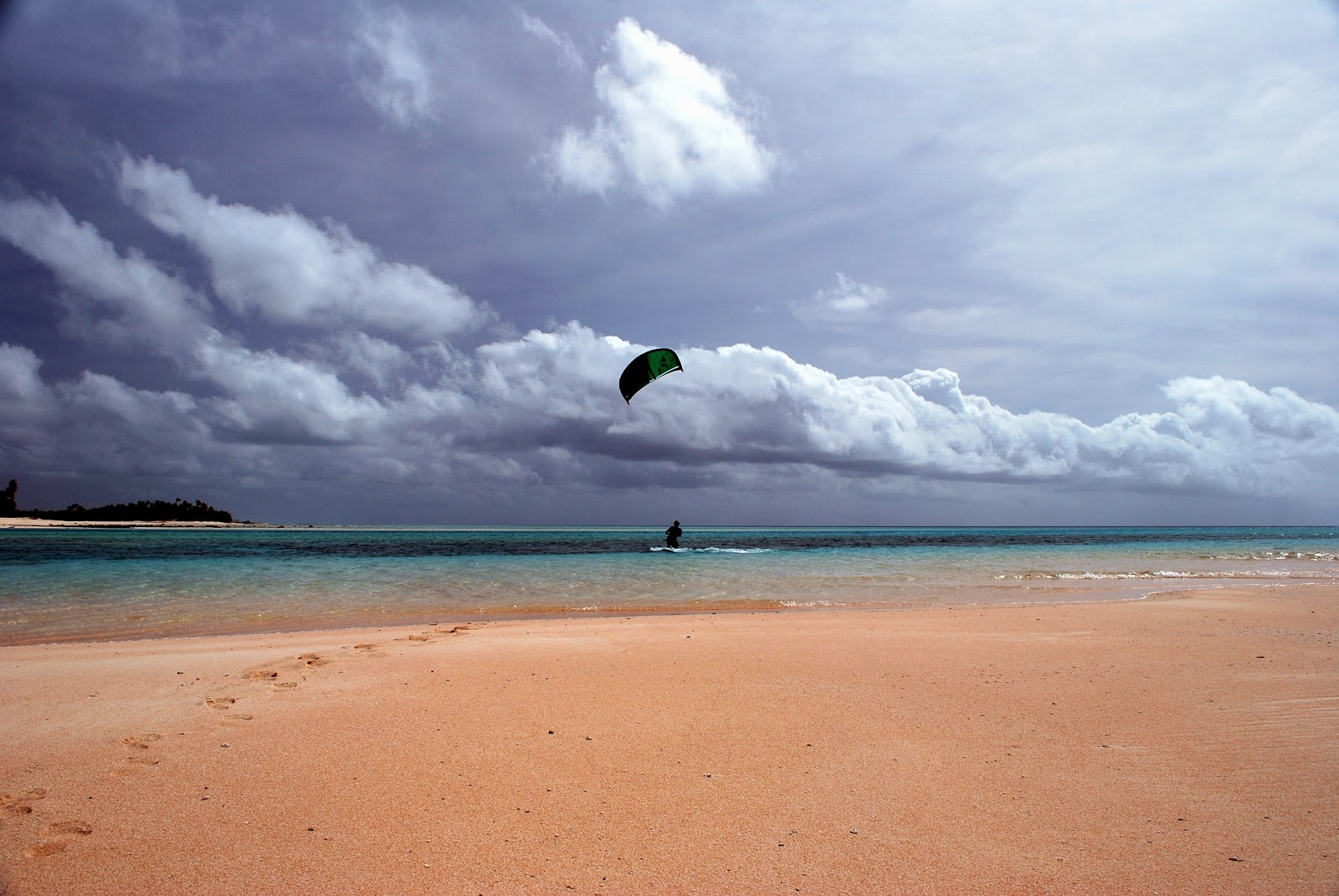 The Enijabro Island anchorage is near perfect in every respect. A long white sand beach, coral gardens to snorkel, excellent easterly wind and wave protection, proximity to a good kiting spot and a large coral free sand patch in which to anchor.

Last night we had a sushi party aboard LightSpeed and enjoyed a nice evening with Teri and Philip (s/v Blue Bie - Outremer 43) and Laurance and Mark (s/v Radiance - Beneteau First 45). We had ceviche, sashimi and several huge plates of sushi rolls complemented with a nice Asian cabbage salad by Teri and a delectable apple pastry by Laurance. 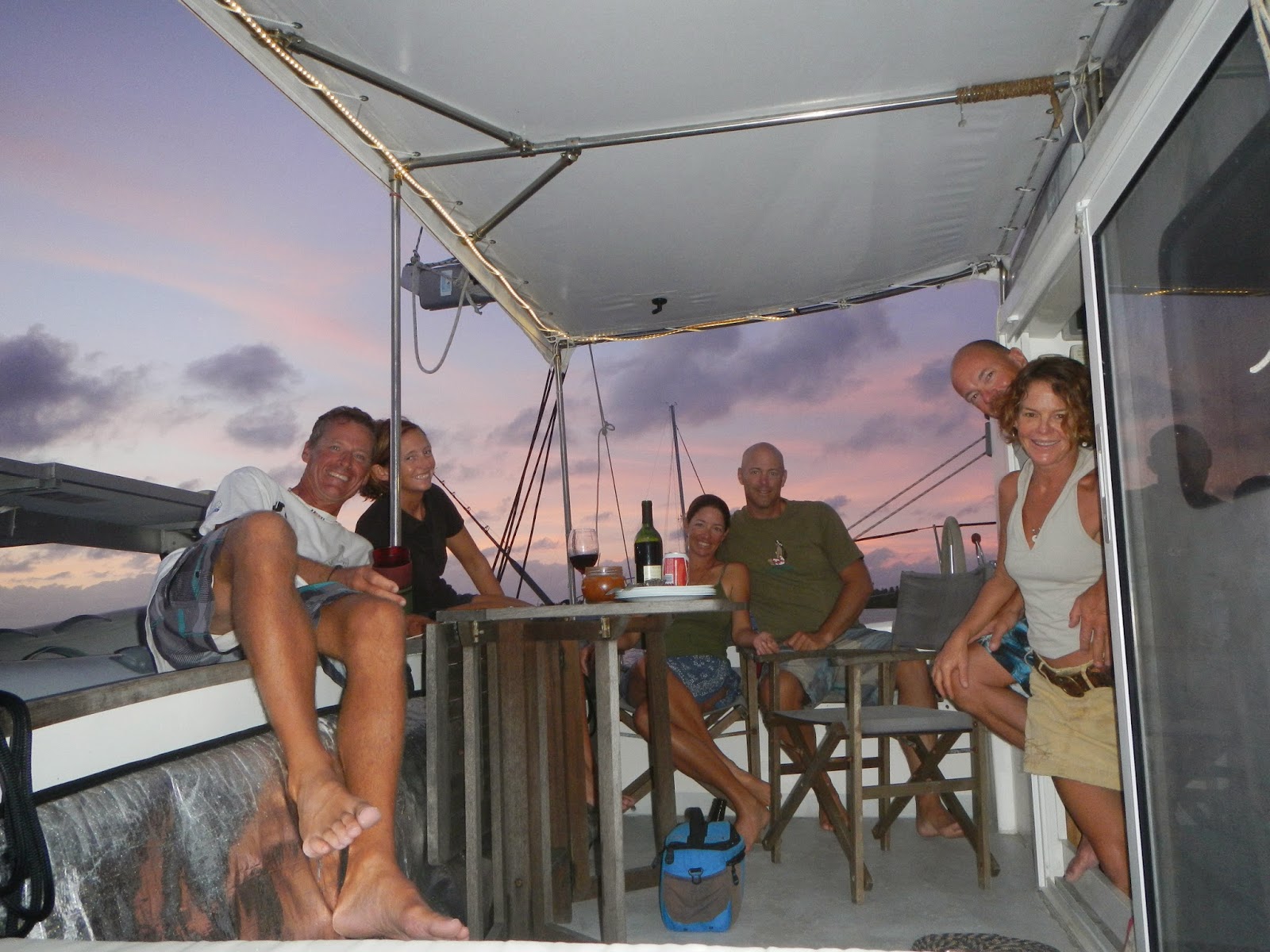 Today more kiting, snorkeling and hopefully some beach combing. Cruising is not all palm trees in paradise. Isolation from family and friends, living in a tiny space 24/7/365 for 8+ years, enduring stormy weather are but a few of the sacrifices of traveling the world by boat. However, sometimes you get those true mountain top experiences and right now I'm really enjoying the view.