On the 11th we made an overnight sail from Majuro Lagoon to Ailuk Atoll about 200nm NNW of Majuro. Sailing conditions were superb with NE 12-14 knots of wind and boat speeds averaging over 8 knots. In the first 12 hours we made over 100nm! Sailing alongside our friends Phillip and Teri on s/v Blue Bie added a bit more motivation to trim the sails a few times. Blue Bie is an Outremer 43 and a nice match speed-wise for LightSpeed. I'm not sure how hard Phillip was sailing, but despite them getting a head start out of Majuro we slowly overtook them in the morning. It was a little bumpy sailing fast to weather and Kathy was a little sea sick. I was having great fun as we rarely sail within sight of another boat. Part of this was they sailed a more direct course while we added extra miles by heading more north to get in the lee of Aur and Maloelap atolls for dinner time. Overnight winds built and we double reefed the main and then the jib. Eventually, when a squall hit we furled the jib entirely for most of the night. Apparently, Phillip kept things moving to beat us to Ailuk by an hour!

When we neared Ailuk we put out the fishing lines as we sailed by the south pass toward the SW motu. Fishing was good with a Skip Jack, Spanish Mackerel, double hook up of Mahi Mahi, we lost both near the boat, double hook up of Rainbow Runners of which we also lost both near the boat and then a big hook up of a 52 pound Yellow Fin Tuna. The Tuna was a real fight, but we kept the hook in him and after a long battle with our old crappy Penn Senator fishing rod and reel we got him aboard. I think this is the biggest Yellow fin we've landed aboard LightSpeed. However, last year I landed a 54 pound yellow fin in the dinghy while fishing at Nuku Hiva island in the Marquesas.

After the Yellow fin we headed into the lagoon with another sailboat close behind. It was s/v Radiance with Mark and Laurance aboard. We advised them to let out some fishing lines and then we headed in the south pass at Ailuk. The pass starts out at 45 feet then shoals on the inside to ~14 feet. We sailed through and came back out and then headed back in so we could give Mark accurate info on the depth of the pass. Radiance is a 45' Beneteau First with a deep 8' draft? The boat is very similar to our old s/v La Vie a Beneteau First 405. Once in the lagoon the conditions had built to a brisk 25 true and the seas were choppy as we motored toward the anchorage in the SE corner.

Upon arrival a traditional Marshallese canoe ripped past at 10+ knots with lots of smiling faces aboard. Soon after, an outrigger canoe paddled up and offered us some coconuts. True island hospitality. Next, Anious (AKA Pumpkin on the HAM radio net) and his wife Emily invited us in to the island for a visit. We headed in and were warmly welcomed with flower leis and more drinking coconuts. After a nice visit we headed to the acting Mayors home to check-in, obtain permissions and pay our visitors fee of $50. We had a troupe of 20+ very young kids leading the way. Ages ranged from 3 and up to maybe 12 years old. The kids were super cute and mesmerized with our every move. One time I clapped and everyone spontaneously clapped back. Then we just as spontaneously started a round of ...If you're happy and you know it clap your hands, If you happy and you know clap your hands... 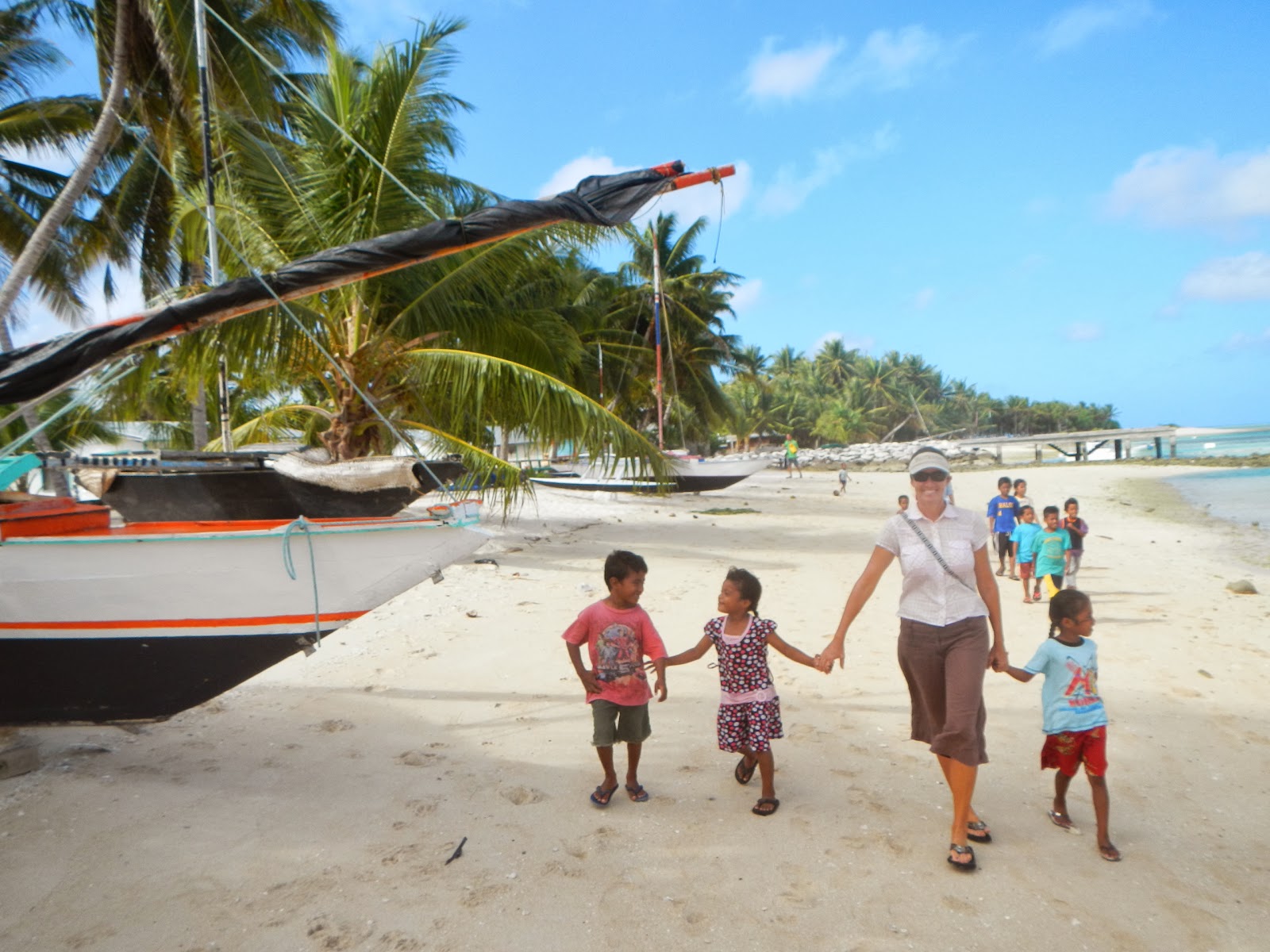 Kathy walking back to the boat escorted by a few friendly Ailuk atoll kids . 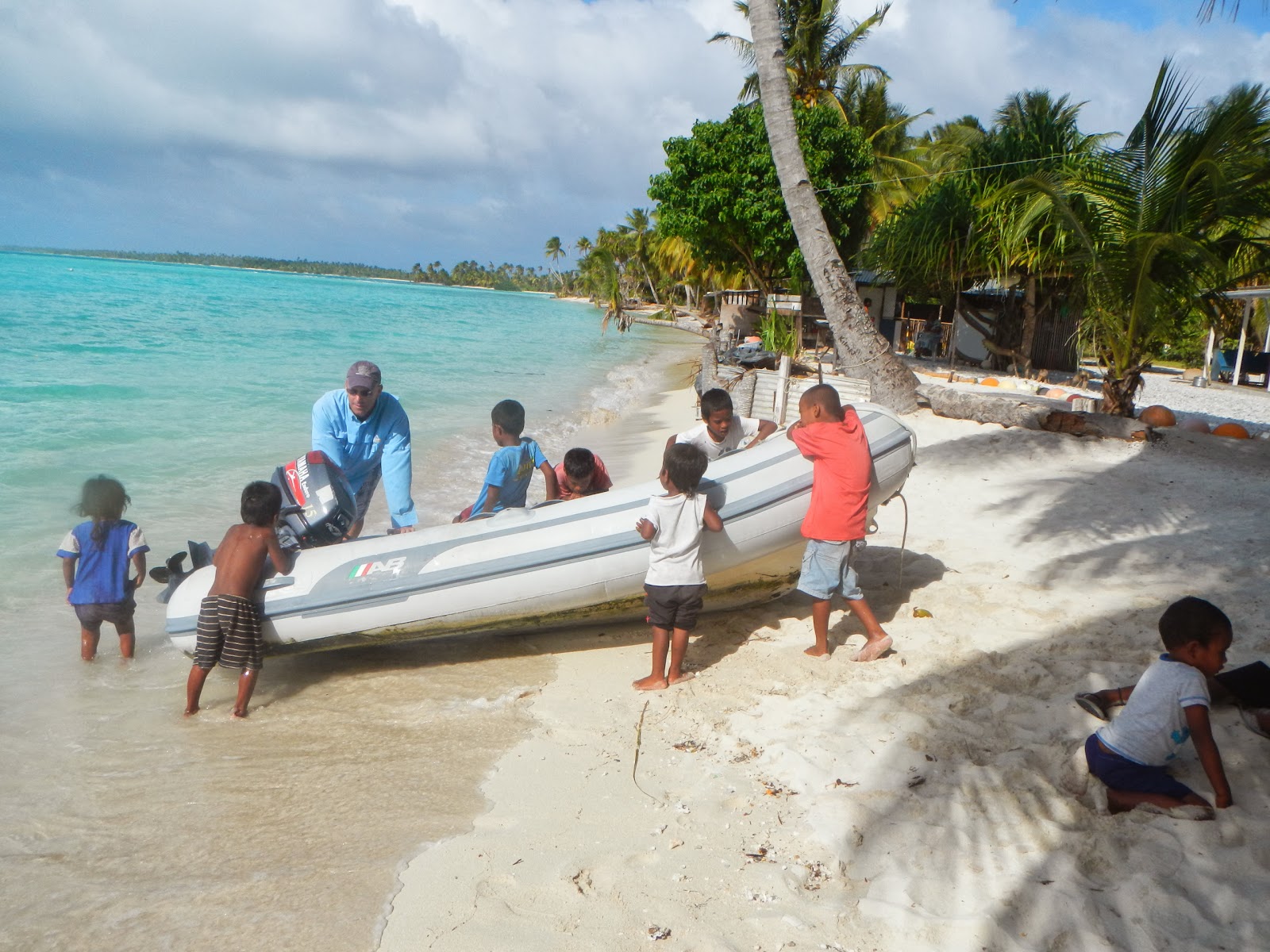 Dave and a few Ailuk atoll boys are ready to help launch the dinghy.

Soon the kids were really warmed up to us strangers and having lots of fun. Soon all the kids were competing to hold our hands as we walked the 5 minutes to the Mayors home. At times we'd have up to three kids on each hand and they'd string out to the sides from there. I'm not sure what drives the customs of a place, but this is a friendly one. We soon greeted the acting Mayor, a nice woman by the name of 'Ready', whom held on to a handshake for as long as you felt comfortable. We soon found that holding hands on Ailuk is common and prolonged and a little uncomfortable for strangers at first. Ready was headed to church, so we agreed to return the next morning at 9AM to complete our paperwork and payments.

As before, Anious and Emily greeted us warmly and we enjoyed a chat and some fresh green drinking coconuts. We also had an offer to buy some freshly caught lobsters. We split the 10 live lobsters between 3 boats. Total cost for all 10 was $40 or $4 each. Not too bad! 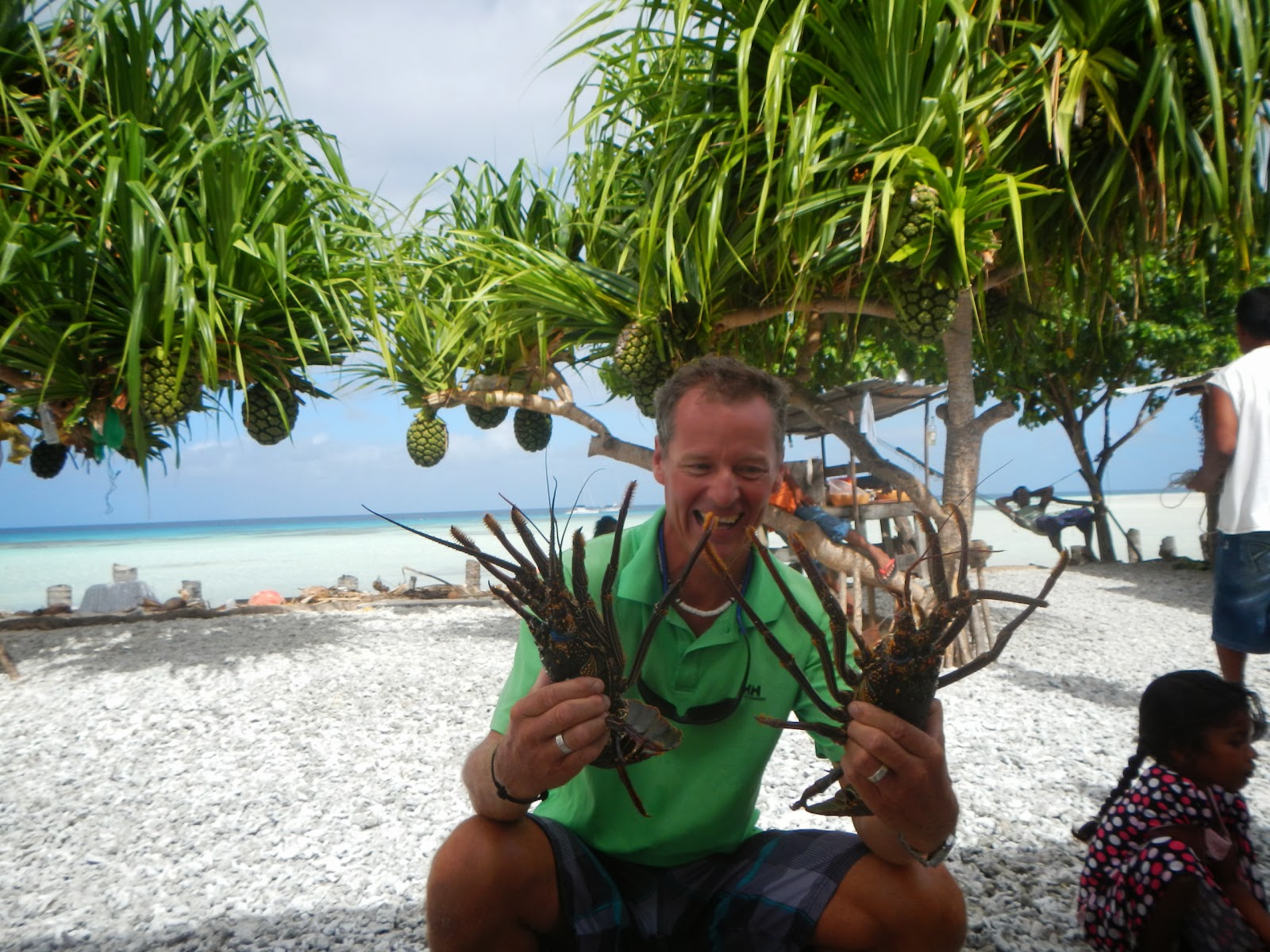 Mark from s/v Radiance picks out a few nice lobsters on Ailuk. 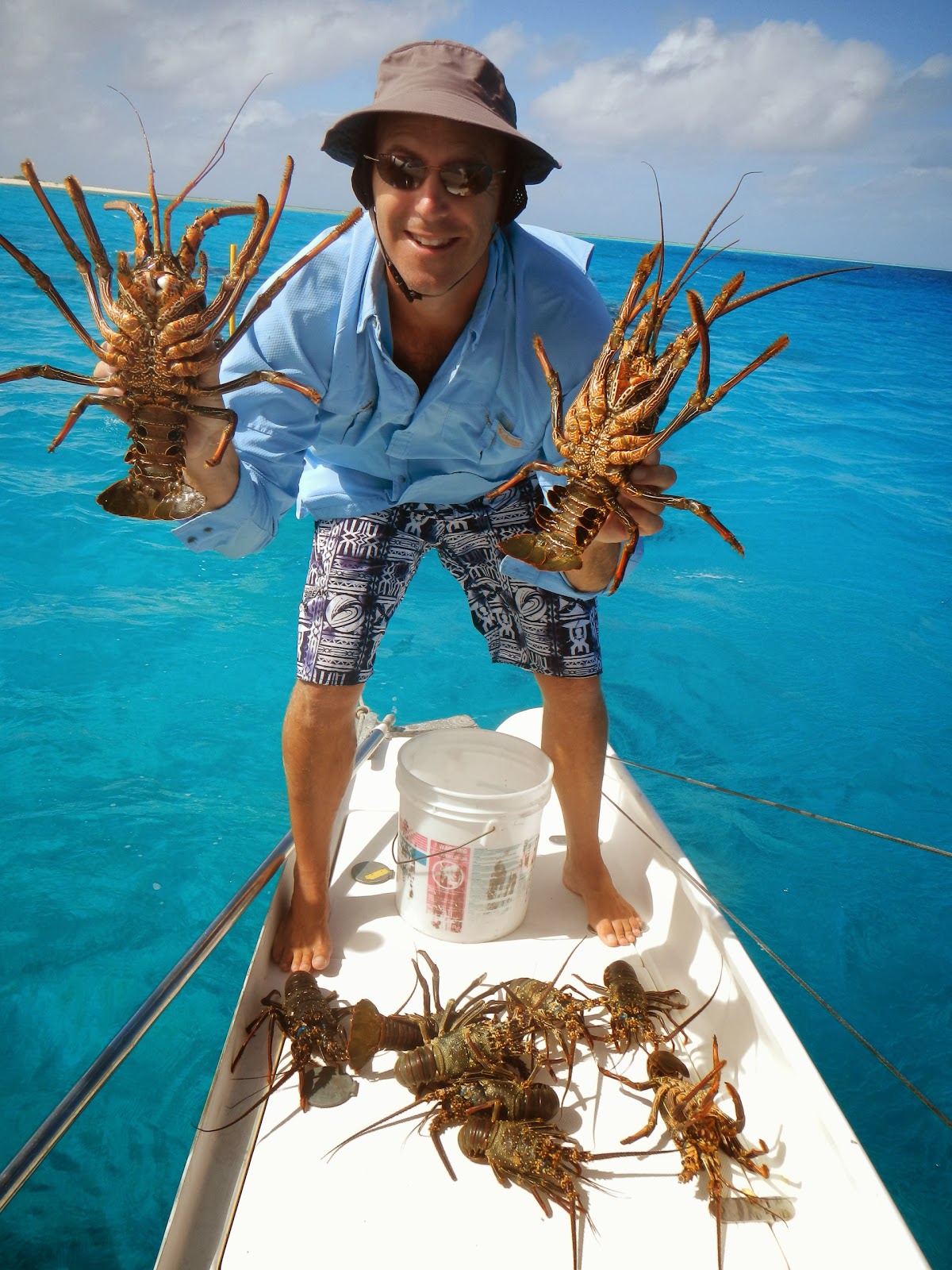 Dave sorting the lobsters on the back of s/v Blue Bie.


On our second trip to acting Mayor Ready's home we had even more kids and all holding hands and giggling. Ailuk is a happy place.

Around 11AM we went kiting with Blue Bie and I was support boat while Kathy practised, later Teri had a hard crash and sprained her knee so I helped get her back to s/v Blue Bie.

Then we headed ashore for some festivities at the school. Kathy organized a three legged race with kids ranging from 3 years old up to 7th graders. 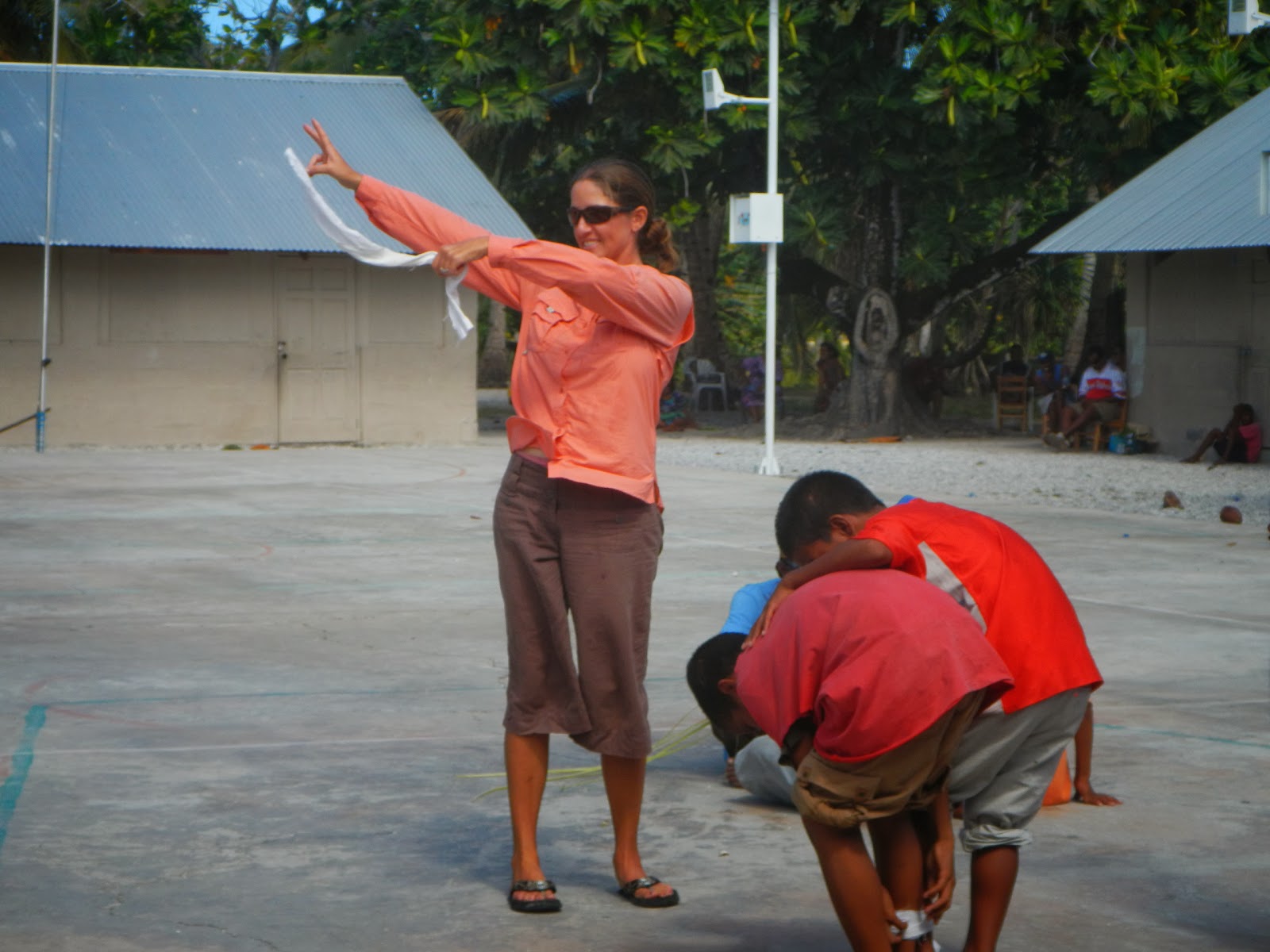 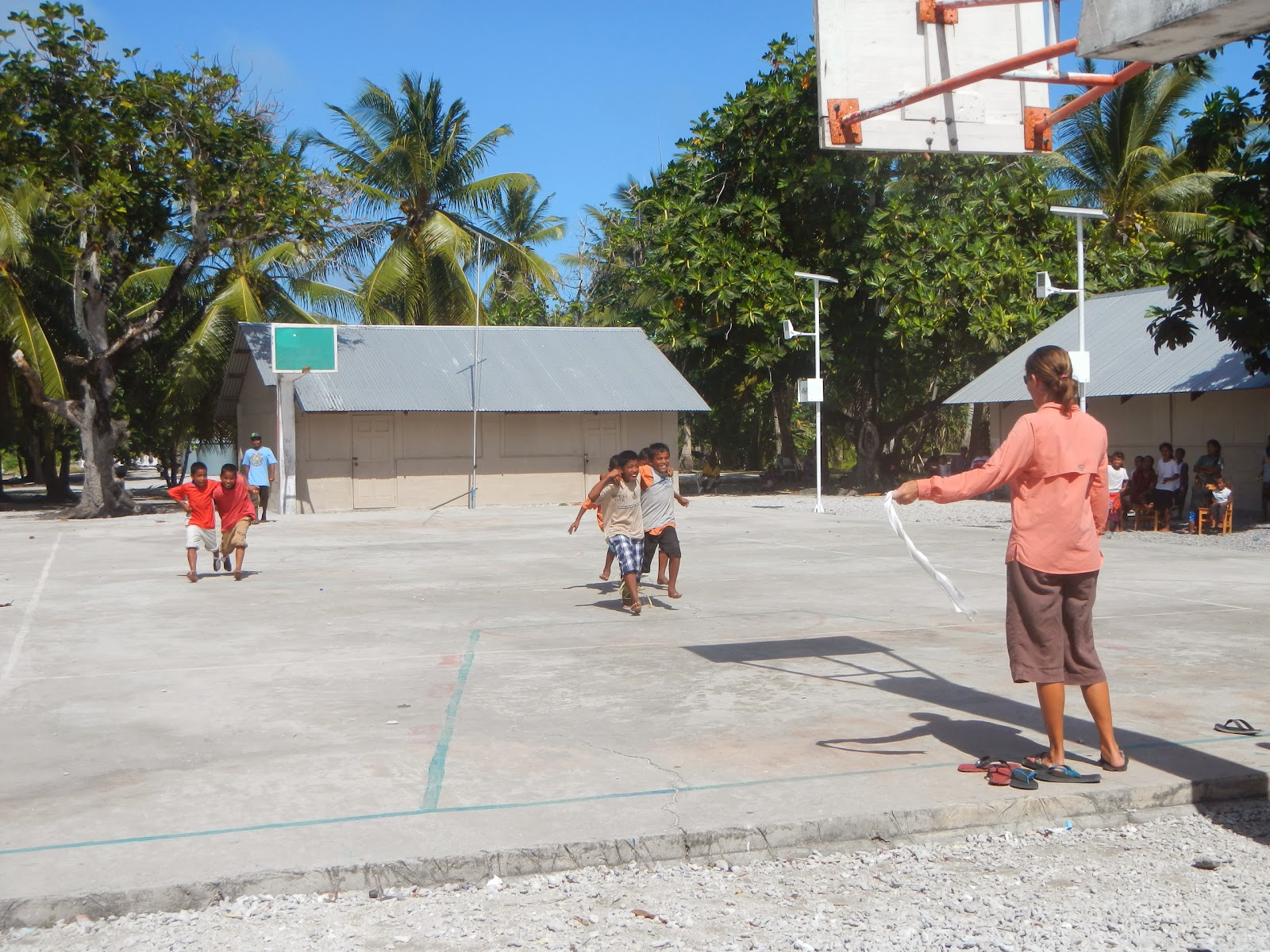 I organized a teamwork game where 5 teams of 5 persons had to pass handfuls of coral sand along the line and the winner was the team who filled their bucket first. 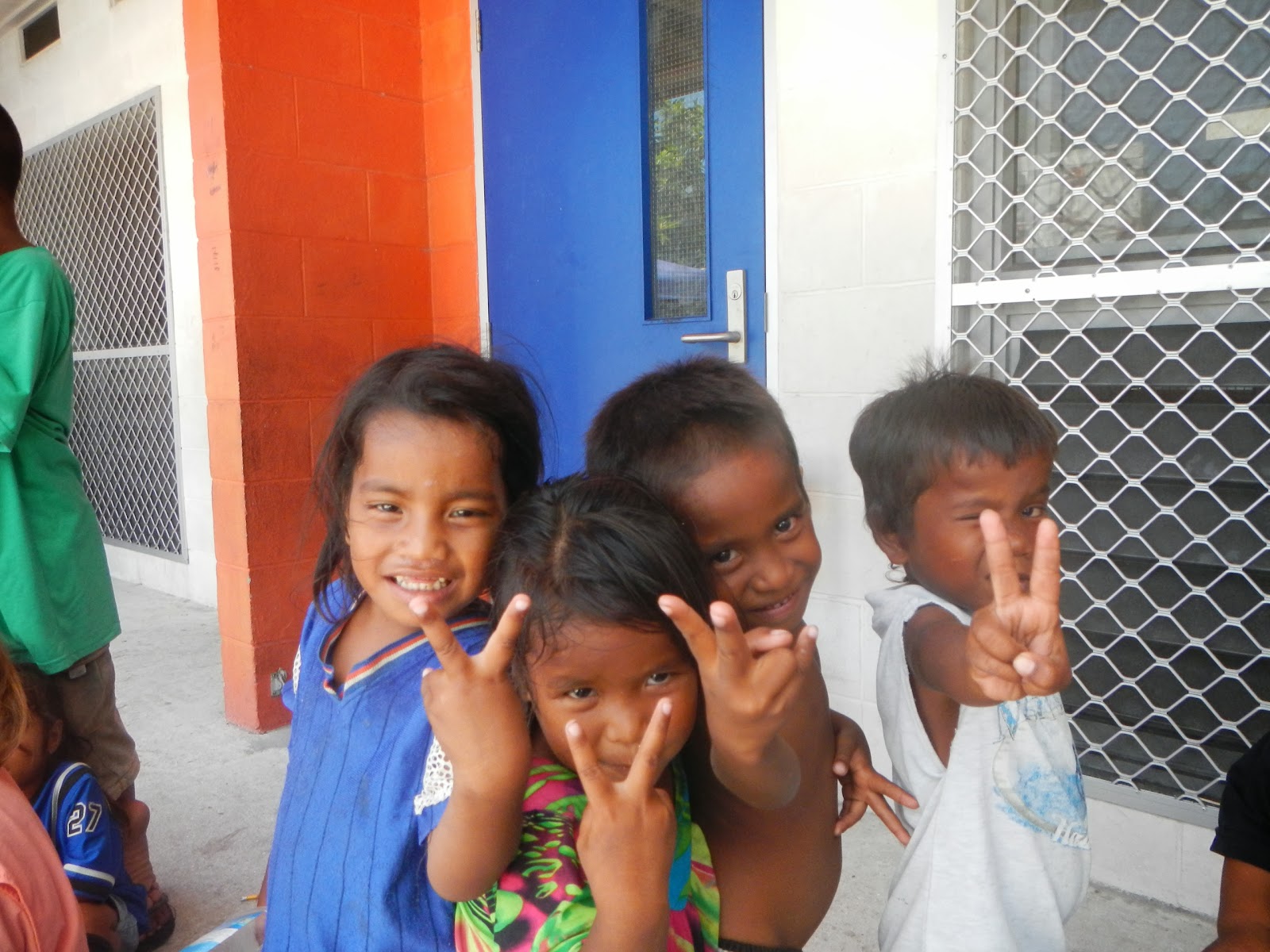 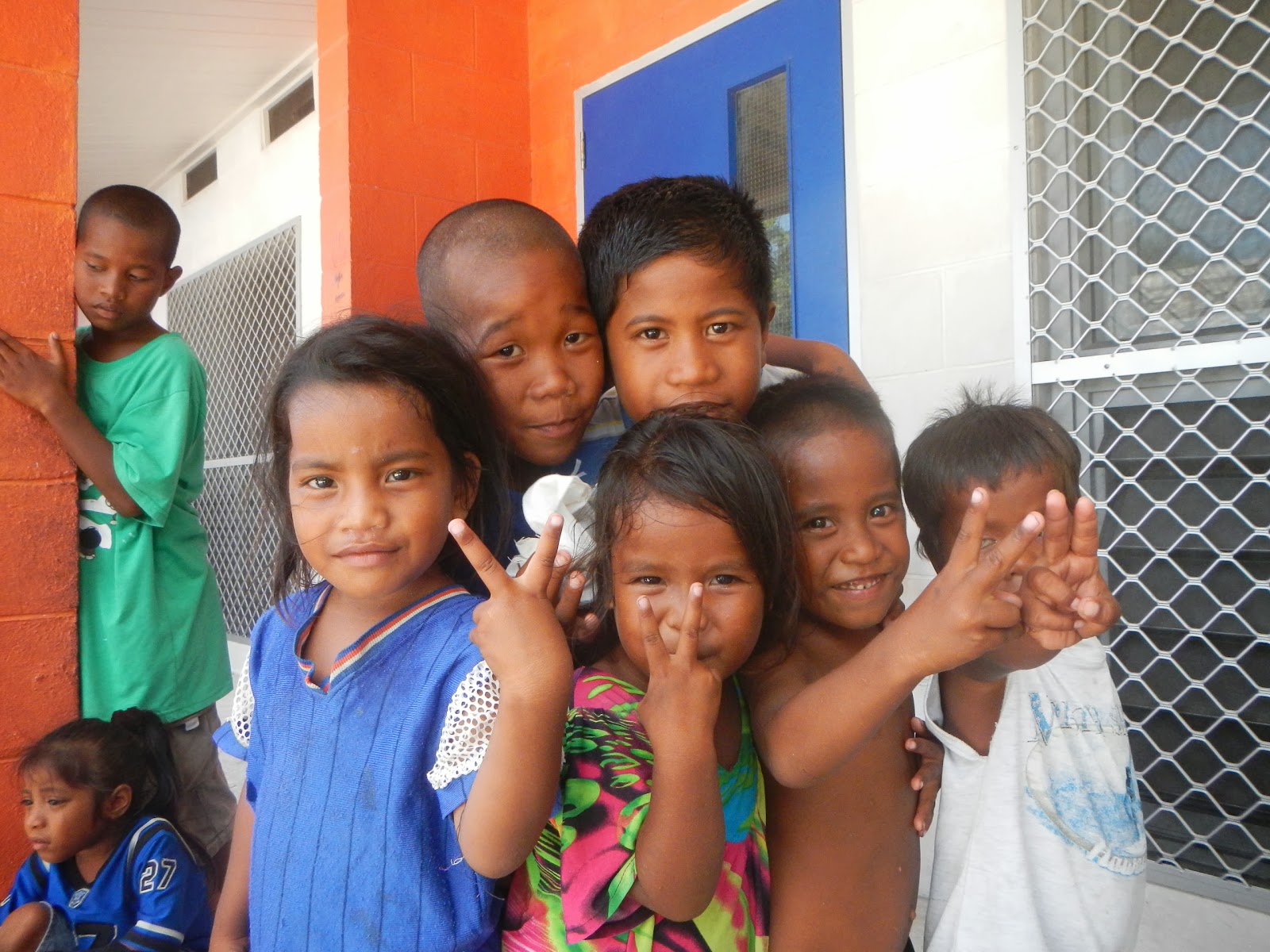 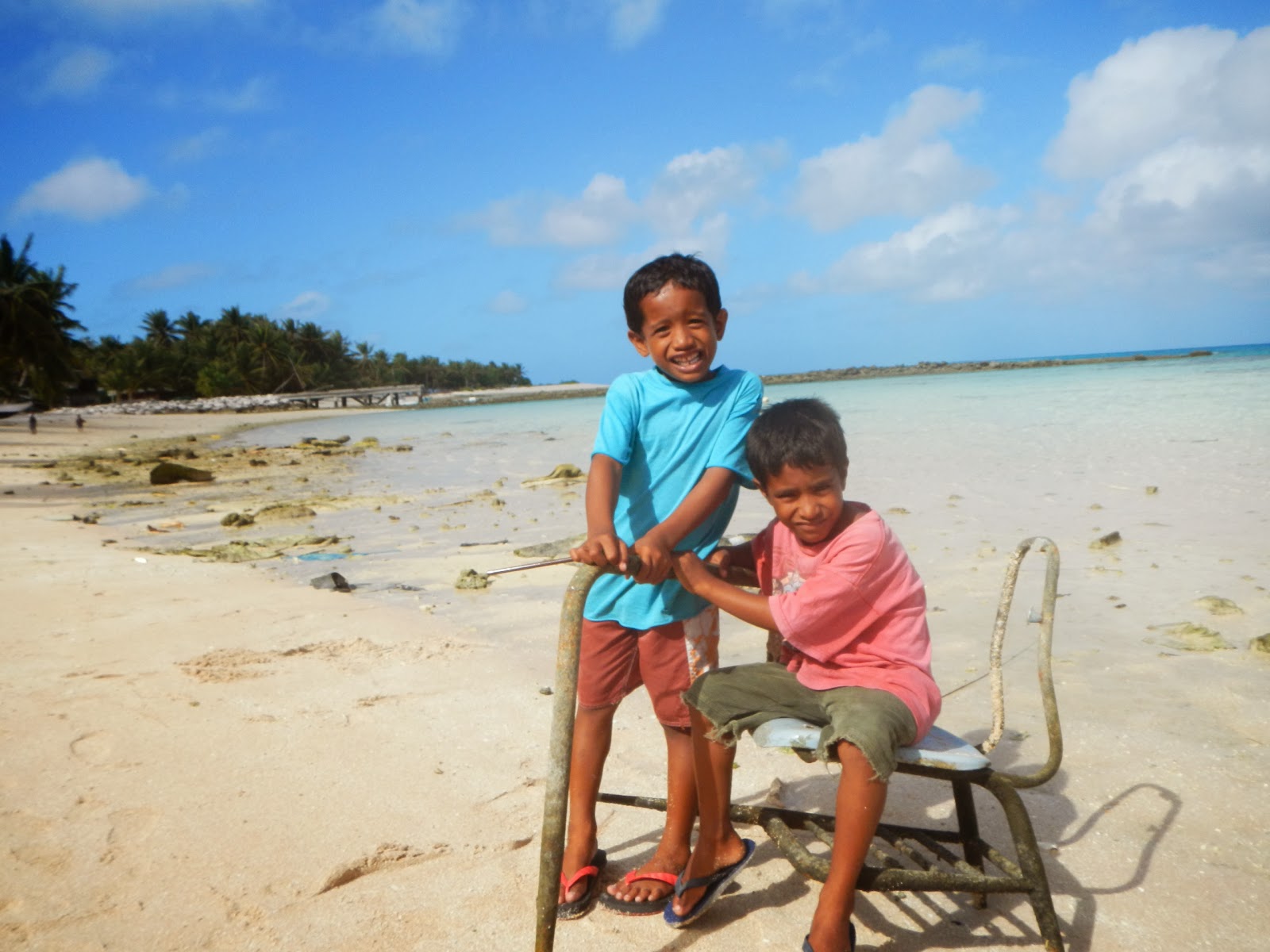 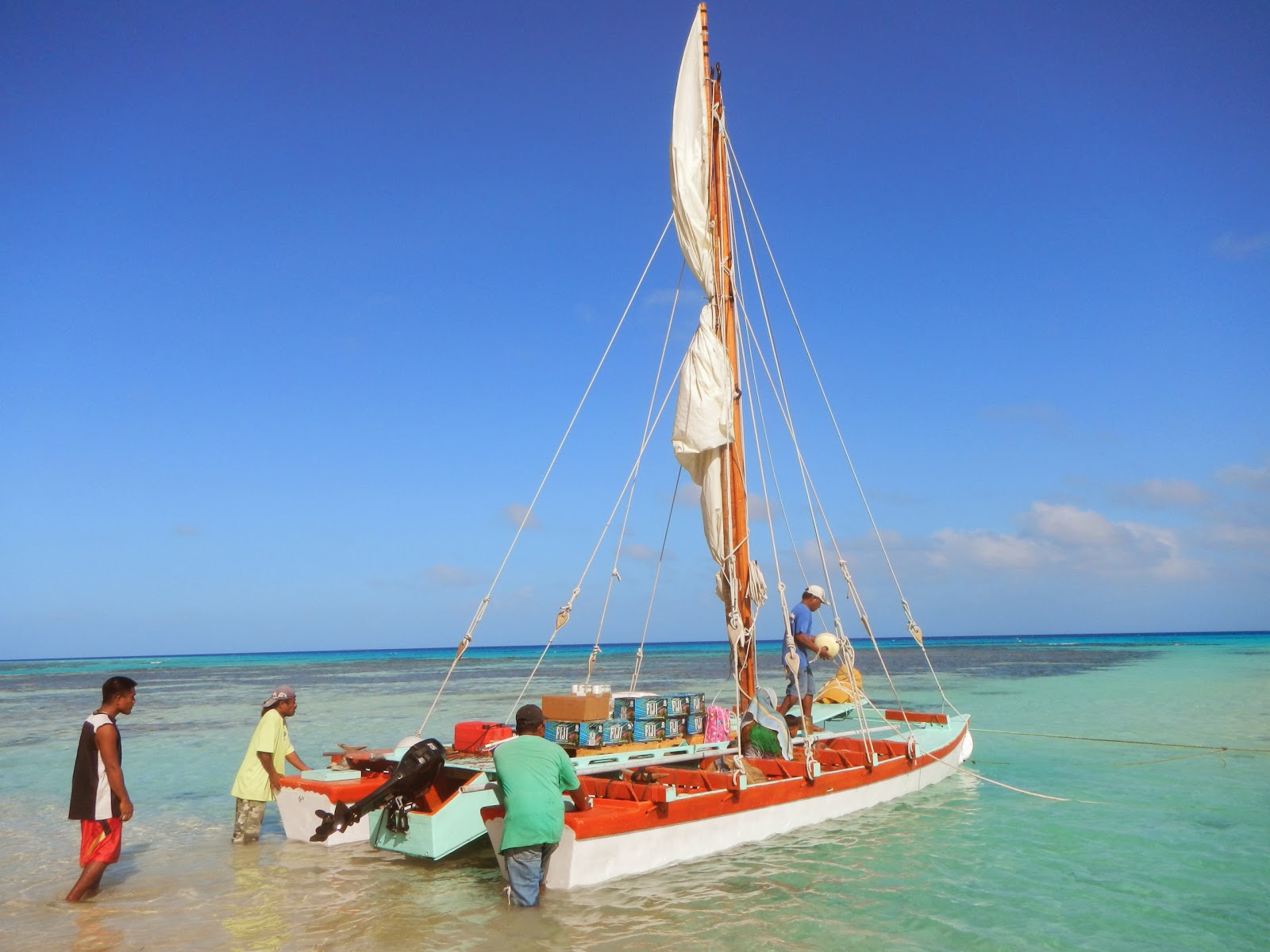 
Tomorrow more kiting and then a big festival at the school where we've been promised food, singing and dancing. It should be great.