Last night we anchored in Nichols Bay on the most southerly end of Prince of Whales Island 54 44.4 N 132 09.58 W.  We pretty much anchored at the last possible moment before total darkness,  not ideal with a broken sounder and very little detail on the chart.  No screens involved... mostly squinting in the near darkness to make sure we weren't too close to shore or some crypticly denoted rocks on the chart. When the anchor hit the bottom, it was a little deeper than we'd like, but the holding was good and the weather settled, so a good nights sleep. 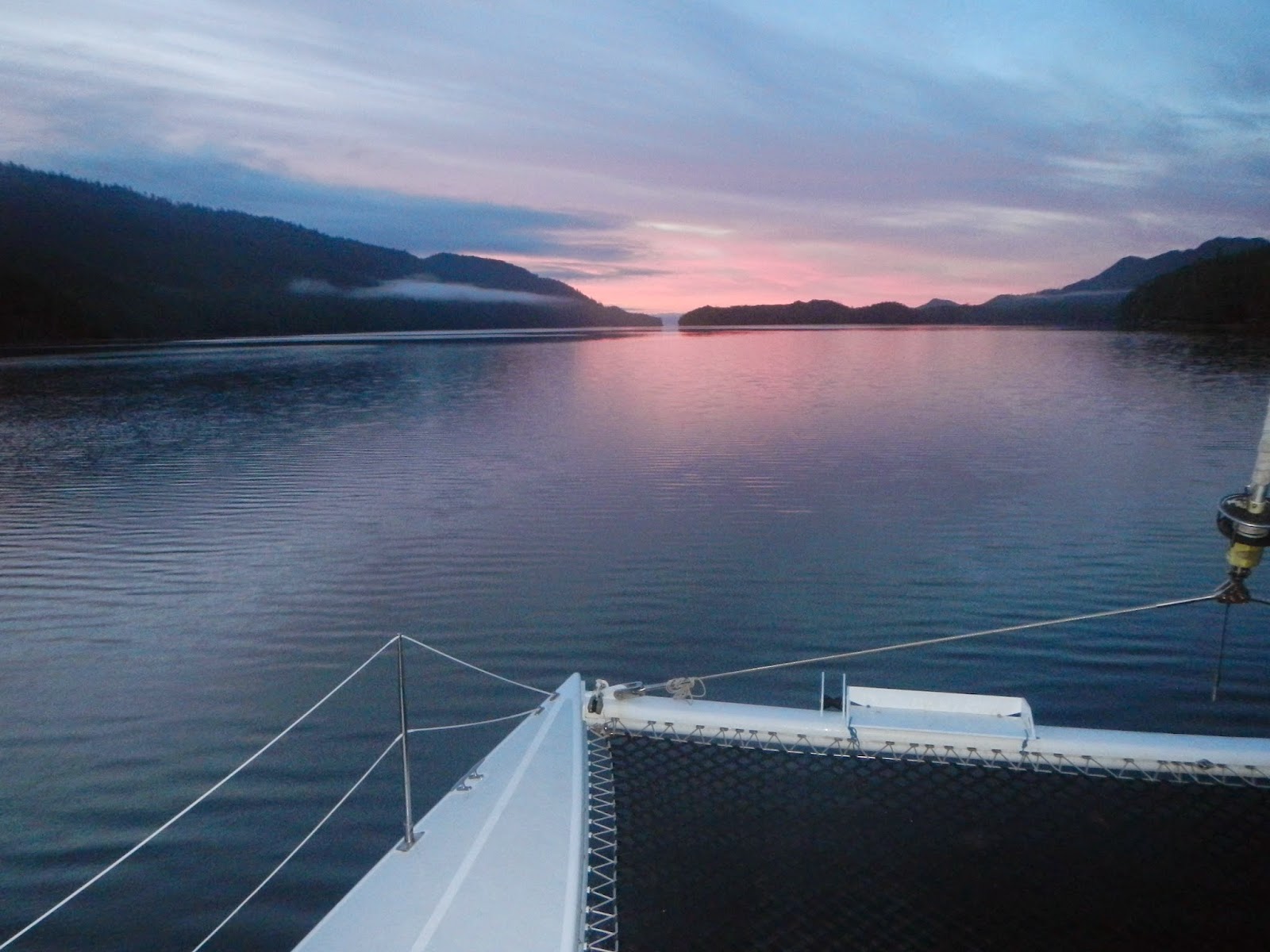 Heading out of Nichols Bay in the early morning.

Before entering Canada I wanted to clear all the fish out of the fridge and thus had a late night smoking the last of a huge Chinook Salmon we were gifted while in Port Alexander by the f/v Float On.  I never got the skippers name, but thanks man as we had some really nice meals with enough left over to fill 8 half pints with smoked salmon.

I rolled out of bed before 6 to tend to my smoking salmon, get things stowed, start the pressure canning operation and to get us underway.  In a deeper spot half way out of Nichols bay I had a prawn trap soaking overnight in 288 feet of water and hauling it pulled in only a dozen 'keeper' spot prawns as I sent as many females bearing eggs unharmed and back to the deep.

Fog was thick for our ~75nm run toward Prince Rupert and plenty of logs and kelp to dodge.  One huge log jacked my blood pressure as it loomed out of the fog with precious little reaction time.  It was 24-30" in diameter and fully 40' long, just the sort of log that busts up your propeller or rudder or both.

Nearing Price Rupert we couldn't raise the Prince Rupert Yacht Club on VHF channel 73 and instead hailed Coastguard Prince Rupert for advice on clearing customs.  We were given coordinates to the Lightering Dock at 54 18.824N 130 19.931W where we found a nice dock for temporary tie up for clearance.  Just pick up the phone on the dock and within minutes you' re cleared in.  Gotta love Canada!

Next we moved to the PRYC and tied up in an open spot, no small feat for our 24 foot beam.

Rodger from the neighboring yacht Kama Hele Kai greeted us at the dock to take lines and help get us secured, Rodger was kind enough to offer his phone to call the yacht club staff who was off site and soon after we were in an even better slip and good to go for a walk around town.

We ended up at Breakers, the go to restaurant on the Rupert waterfront for dinner and not before long Rodger and Arlene from m/v Kama Hele Kai arrived and we enjoyed great company and conversation for dinner.  Thanks for treating Rodger!  We hope to share an anchorage with them soon.

Tomorrow laundry, fuel and weather analysis for the trip south.