We'll be driving down the Baja this weekend.  Best contact is via email.  Destination La Paz.  It will be our first time on the Baja via car!

LightSpeed is back in the water. 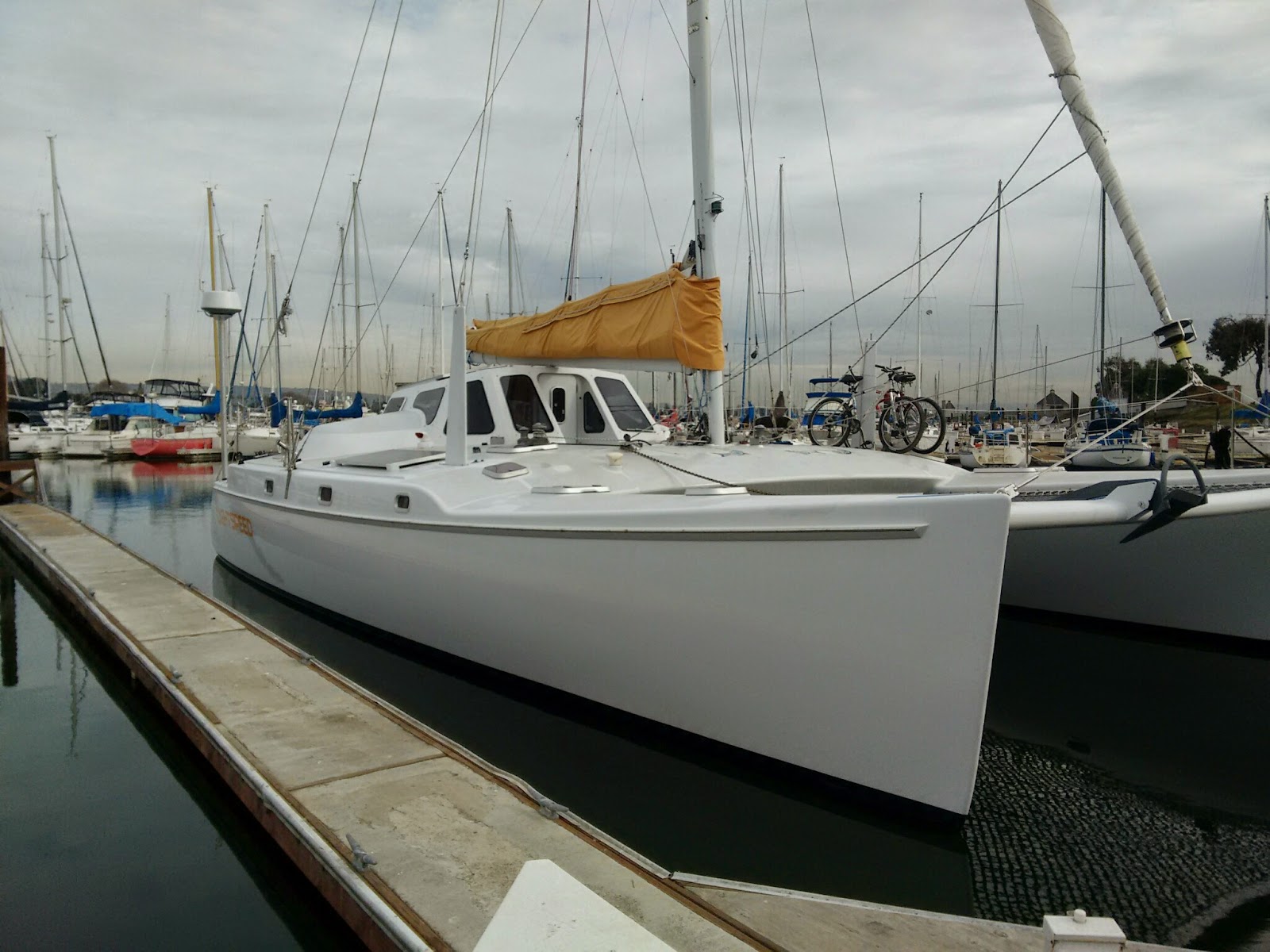 Back in the water at last.   After 45 days in the boat yard, coined as 'Hard Time' by cruising friend Paddy, we really need a vacation from our boat.

Kathy drove our 'Craigslist' cruiser car down to Alameda and I sailed LightSpeed the 40 or so miles in under 5 hours.

The next morning we jumped in the car for a road trip down Baja.

It's going to be a quick trip as Kathy has a job starting in about a week.

OpenCPN, the go to PC or MAC software for cruisers sailing both on and off the beaten tack.

Charts for most USA waters can be found here: http://www.nauticalcharts.noaa.gov/mcd/enc/download_agreement.htm

Charts of the ENTIRE world are a litte harder to aquire, just walk the docks and ask a salty looking cruiser for a copy of their CM93 v2 charts.  Note:  USE CM93's with caution as not everywhere is accurately charted (i.e. Tonga, Fiji, Vanuatu and many other remote locations).   No fault of the charts, it's just the accuracy of the underlying survey of some very old surveys on which the charts are based.

Supplement and compare the above charts with super accurate Google earth images that you can custom create using GE2KAP found here: http://www.gdayii.ca/

OpenCPN is a great planning tool, that can also be used for live navigation, weather analysis and much more.

All morning I've been humming Sting's Do Do Do song.  The boat yard is getting pretty boring, especially when we have foggy mornings that keep the decks covered with dew.  Today is extra Dew Dew Dewy. Dew on a deck winch this morning.

Every night we get some dew.  However, when we have heavy dew and foggy conditions it either ruins the previous days work or delays any new work until the fog has lifted and the decks have warmed and dried.  Today it's already 9:30 AM and the fog is still super thick with no indication that it intends to burn off.  Last week we had an entire day where the fog never abated.

The ongoing BIG GIGANTIC MASSIVE project is repainting the decks.  Progress is going slow due to the Dew Dew Dew.

Here is a break down of the steps involved.

Paint areas to remain white
Sand in between coats
Pray for no rain or heavy dew
Final paint areas to remain white
IF paint is still shinny in the morning Hurrah.  Move to next step.  If not, repeat sanding and painting step.
Let paint dry for a few days
Tape off newly painted white areas
Wipe areas to be painted with solvent to clean any contaminants
Paint a section of Awlgrip Whisper Grey
Let it dry overnight
Paint areas again with Gray paint.
Sprinkle in non-skip while paint is still wet.
Let dry overnight
Pray for light dew and no rain.
Paint again
Remove masking
Clean deck hardware
Purchase new bolts
Trim new bolts to length
Install new bolts with sealant
Whew.  One area is now done and you can move to the next.

Yep, LightSpeed is still on the hard.  We had a buyer before the holiday, he flew out to inspect LightSpeed and after a full days inspection, we put a deal together. Unfortunately, the buyer could not arrange financing within the agreed time frame and the terms expired.   A real bummer as we liked his plans for LightSpeed

The good news is we have many interested parties and expect something to happen quickly.

In the interim, we've been wrapping up projects.  We're proceeding as if we're prepping LightSpeed for another huge multi-year adventure far from any support services in the wilds of the Pacific. Yes, there's a little wishful thinking going into decisions on preparations, on the wild chance we didn't need to sell.  We truly wish we could afford to keep on sailing LightSpeed instead of selling.

This last week it was new Yanmar SD20 diaphragm kits.  This requires the engines be unbolted and moved forward off their mounts,  then the saildrives can be removed from the boat for service and new diaphragms installed.

With the engines unbolted we installed new motor mounts, not because they were broken, just because it was the thing to do, ensuring trouble free operations for thousands of engine hours down the line.  Plus, plenty more of that 'just because' thinking we installed new alternators.  Then routine maintenance such as new coolant, oil and filter.  Yep, the engine and engine rooms are looking really good, spic and span after a deep clean when the saildrives, exhaust system and engines were out of the way.

There are four Atlantic 42's currently for sale.  Two on the East coast and two on the West coast.  I've personally seen two of the other boats which lends conviction to our firm price near the top.

Boats require constant attention and updates to maintain a high level of reliability.   It's not just about 'maintenance' or just fixing what's broken, it's about preemptive replacement and upgrade of gear, so the vessel improves with age.  It's also about what spares to have aboard.  LightSpeed's systems are continuously refined for reliability and optimized for ease of use, then of course tested with thousands of ocean miles!

Currently, we're pulling deck hardware, inspecting each deck penetration, fixing any problems, priming, renewing non-skid and painting the decks.  It's a monumental project that will take probably 3 more weeks of solid labor.   The main traveler has 62 bolts alone!  Did I mention this is an epic huge project!!!

We're also pulling the tracks that secure the trampoline to the under wing.  Tons more bolts nuts and washers.  However, these fasteners are going to be eliminated and replaced with a really cool detail for lashing the trampoline like that found on the ORMA 70 trimarans.   Another massive project, but the new detail will have a super clean modern aesthetic, be super strong, lighter and eliminate all those potentially leaky bolts.  Look for progress pictures soon.

Inventorying upgrades since July 2010...all this stuff has been replaced:

The list of new or upgrades continues on and on.