Dock lines are off, heading south to San Diego.

Yikes!  It's been a while since we've seen such intense lightning.  Dark clouds, heavy rain and lightning bolts on the rhumb line are pretty much my least favorite things.   I tried to sail around the melee by going well offshore, but gnarly lighting was cracking out of clear blue skies on the periphery and the hair on the back of my neck was starting to stand on end.  These crashing strikes were way to close for comfort!  The periphery of the storm seemed to have just as much lightning as the center.  Last time we were in this situation we were sailing our old catamaran 'Pacifica' and a near strike blew-out the radar and depth sounder and nearly scared something else out of the skipper.
Electromagnetic Pulse (EMP) from nearby lightning can be nearly as bad as a direct strike as electrical current flow is induced to surge through the boats' systems frying everything in an instant.

https://en.wikipedia.org/wiki/Lightning
With the skies cracking with flashes and booms, I decided to reverse plans and go toward the beach. About this time I was gathering up all the small electronic devices and hiding them in the oven. For the uninitiated, this is a sailors version of a Hail Mary.  It's a last ditch effort to hope that the galley oven will do double duty as a make shift Faraday cage,  EMP energy will in THEORY flow around the oven and with luck spare the electronic souls inside.  In the end I headed to the fridge grabbed a cold beer and sat as far away from all metal as possible, sipped my beer and tried to think positive thoughts as the lightning lit the sky and thunder rattled the boat.  I snapped this screen shot as I was nearly in the middle of the squall cell.  Then back to the couch to nurse my beer and cross my fingers. 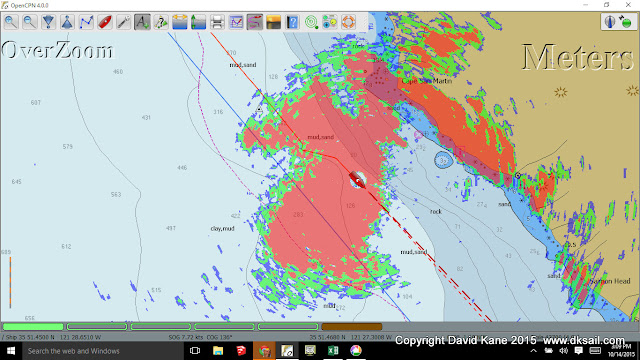 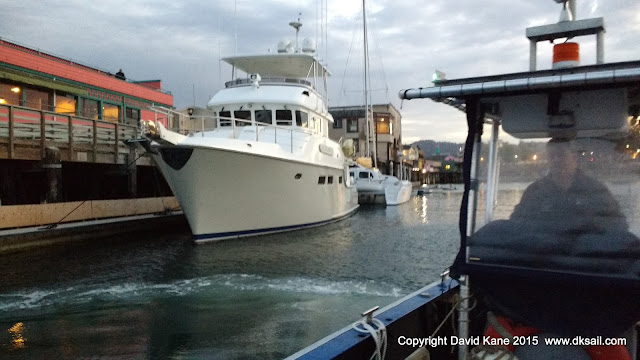 LightSpeed at the 2 hour dock in Monterey, this picture snapped from the Harbor Patrol boat as we finished up a jerry jug fuel run that included a run in the harbor patrol truck to the gas station and then a labor saving ride in the patrol boat to deliver the jugs.  Very Cool. Thanks Bif!  It reminds me of the super cool harbor guy in Dutch Harbor who checked us in when we made landfall there last summer.  The harbor patrol, drove us to the bar for beers and burgers and left us with the keys to his truck to return at some unspecified time. 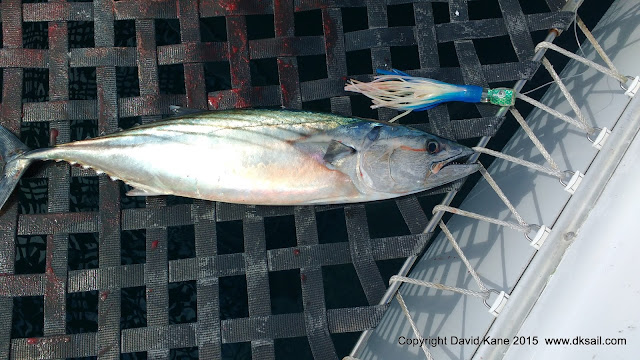 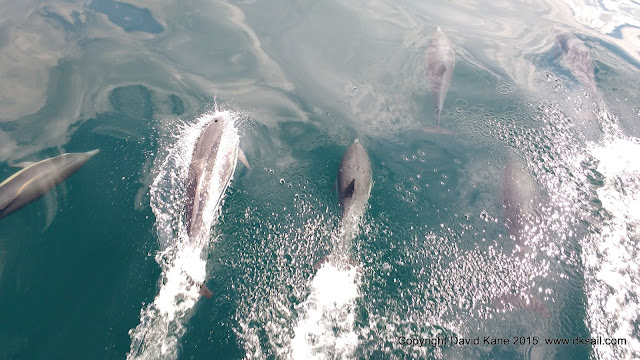 Dolphins a plenty.  Maybe a few hundred in one school 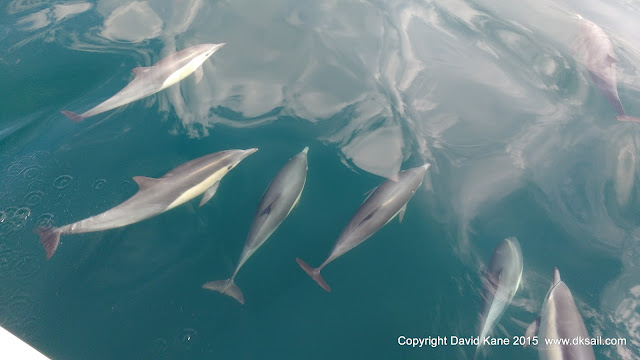 As you can see there is no wind, so great for Dolphin pictures and terrible for sailing. 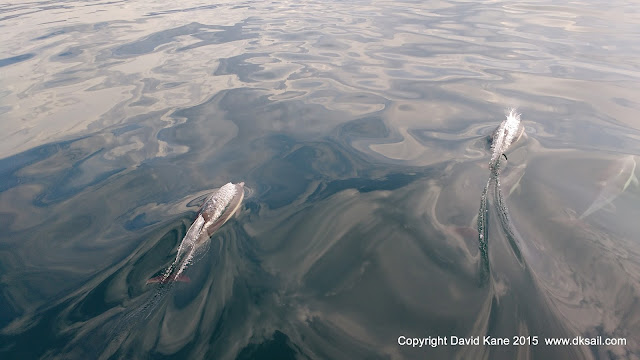 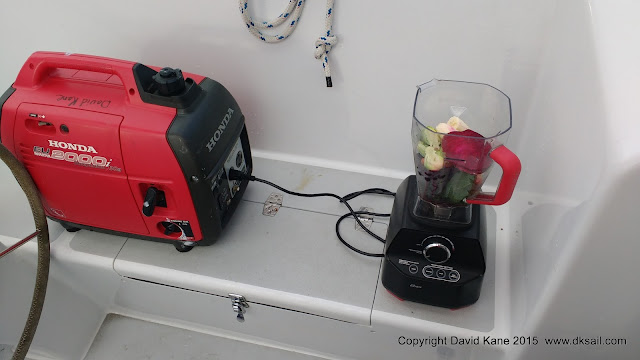 Smoothie, cruiser style.  And you thought your Vitamix was an expensive set up 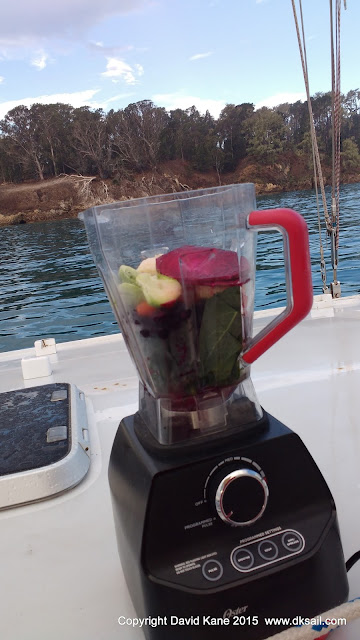 Blending up the last of my organic garden, beets and kale were ohh so good in the natural beauty of San Simeon Bay anchorage. 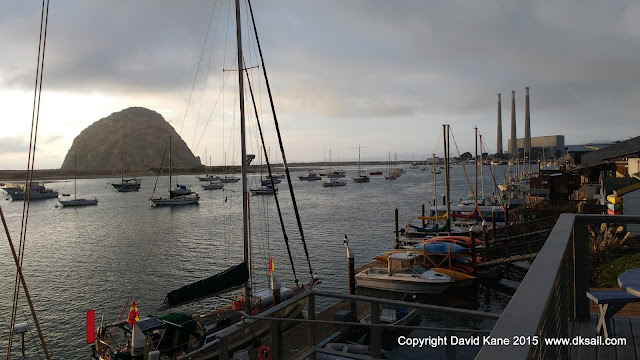 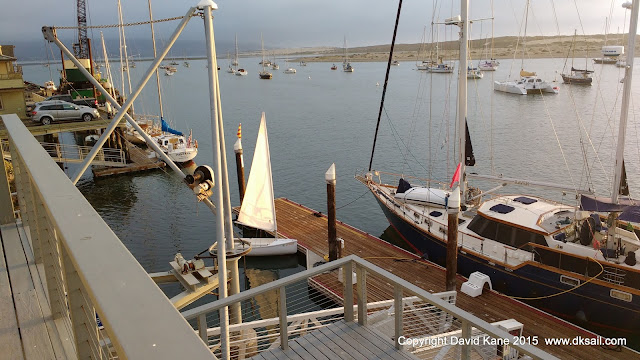 New sailing dink on the left, Lightspeed in upper right. 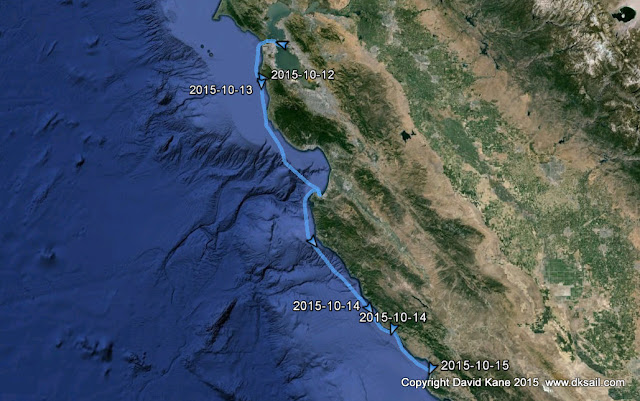