Seems like these 10-12 hour runs each day would yield plenty of time to get some projects done, but not the case as keeping a look out is pretty much all consuming without Kathy on board to help keep watch.

No easy answer to avoiding the hazards of coast wise navigation.  Running close to shore you usually get the benefit of less seas, wind and less adverse current.  The trade off is you get lots more traffic and crab gear, however this is my preference as I going north bound the current can plenty of speed.

Conventional wisdom is that running further out is safer, however you typically get adverse ocean currents and more wind and bigger seas, you also get bigger ships.  Case in point, lots of fishing activity in the 400-500 depth ranges yesterday, which would normally be where you'd be deep enough to avoid crab gear. Yesterday it was big trawlers, dragging nets and circling about causing my AIS alarm to sound frequently, I saw in excess of 50 vessels.  Out in deep water the current can really hurt, in the vicinity of Cabo Blanco I found significant south setting 1- 2 knots outside the 50 fathom line and next time, I'd run close to beach approaching Port Orford as likely there is a back eddy current that would be beneficial and worth the extra diligence in actively steering around crab gear and boats.

To top it off there is much more coast wise traffic here in Oregon with Salmon trollers entering the mix and plenty of sport fishers as the weekend approaches. 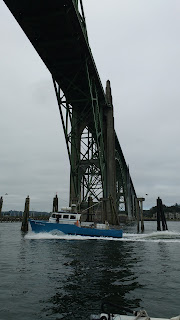 Crossing the bar into Coos Bay was easy as I caught the tide right and the seas had mellowed,  The entrance was busy with the fishing fleet heading in for the day and the Army corp of engineers was actively dredging the Coos Bay bar.

I was happy to find plenty of space to tie up in Charleston Harbor for a very reasonable $19.69 for the night.  Made a nice chicken curry for dinner and good thing I decided to cook the chicken, as no keepers in the crab trap.

Weather looks good through Sunday and then North winds about the time I'd like to be making the run up the Washington coast.
The question now, is where to wait for weather?  Should I stop in Astoria or just push as far as I can?  I'd rather be stuck waiting for weather in a Astoria vs Westport or La Push. No good internet the last 24 hours, so no good insights on what the weather models look like longer term. 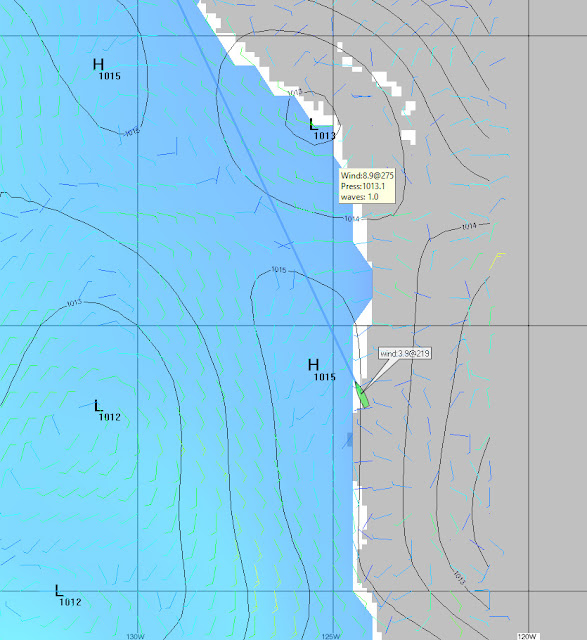 Most of the trip, I've had some sort of cell connection.  Much of the time, my phone says 'Emergency calls only', the network of choice would be Verizon or AT&T, not so much T-Mobile here in Oregon.

Flat'ish seas today and heavy marine layer, thankfully no fog as watching the radar all day is very demanding. Should be an easy trip to Newport and tomorrow Tillamook and then?